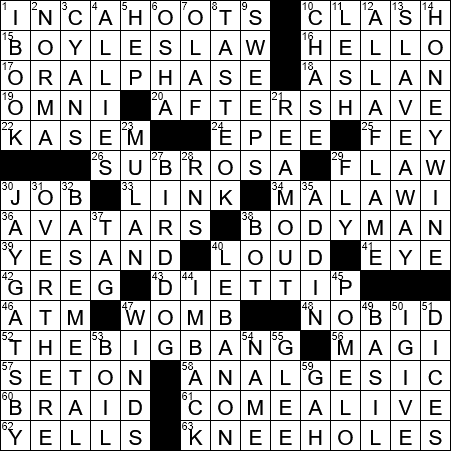 To be in cahoots with someone is to in partnership with that person. The exact etymology is unclear, but one suggestion is that it comes from the French “cohorte”, which was used in the US to mean “companion, confederate”.

“Fey” is such a lovely word, meaning magical or fairy-like. It comes from the Middle English word “feie” which has a less pleasant definition, “fated to die”. The term has been extended over the past century to mean “effeminate”.

“Sub rosa” is a Latin term that translates literally as “under the rose”. The term is used to denote confidentiality, as the rose has been a symbol of secrecy since ancient times.

Those would be in some desks.

Phil Lesh is a bass guitar player and is one of the founding members of the rock band, the Grateful Dead. The band’s first names was “the Warlocks”, a name that had to be changed as there was already a band called the Warlocks (although the other Warlocks band had in fact changed its name as well, to Velvet Underground). “The Grateful Dead” was suggested by Jerry Garcia, and was chosen from a dictionary.

“The Great Gatsby” is a 1925 novel by F. Scott Fitzgerald that tells of the prosperous life of Jay Gatsby during the Roaring 20s. Gatsby develops an obsessive love for Daisy Fay Buchanan, a girl he met while serving during WWI, and meets again some years later after he has improved his social standing.

One of the main goals of the ancient practice of alchemy was to change base metals into gold, a process known as transmutation.

A bot is computer program that is designed to imitate human behavior. It might crawl around the Web doing searches for example, or it might participate in discussions in chat rooms by giving pre-programmed responses. It might also act as a competitor in a computer game.

Lebanon lies at the eastern end of the Mediterranean Sea. The nation has a rich cultural history, and was home to the ancient civilization of Phoenicia. The name “Lebanon” derives from the Semitic word “lbn” meaning “white”, and is probably a reference to the snow that caps the mountain range known as Mount Lebanon, which parallels the Mediterranean coast.

A pomelo is a very large, pear-shaped citrus fruit native to Southeast Asia.

20. It hurts when you rub it in : AFTERSHAVE

12. Filled with desire : ALL AFLAME

13. Work one’s fingers to the bone : SLAVE AWAY

51. Does some kitchen prep : DICES