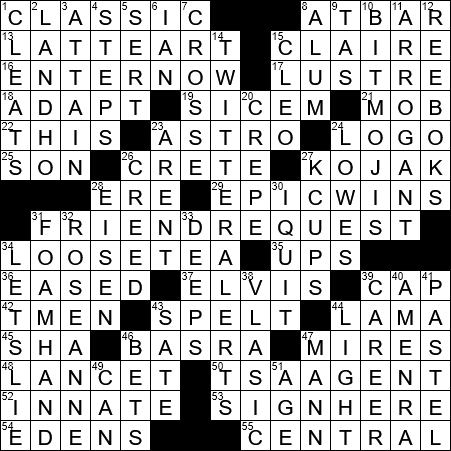 Today’s Wiki-est, Amazonian Googlies
Across
13. Pouring one’s heart out at a coffeehouse? : LATTE ART
Latte art is the name given to the designs that can be drawn on the surface of coffee drinks. Some of those designs can be quite intricate.

15. Lead female role on Netflix’s “House of Cards” : CLAIRE
The hit TV show “House of Cards” is a political drama starring Kevin Spacey that highlights ruthless manipulation within the corridors of power in Washington, D.C. The show is an adaptation of a BBC miniseries of the same name, which in turn is based on a novel by Michael Dobbs. My wife and I have seen both versions of the show but disagree on which is the best. I favor the US version …

16. Sweepstakes exhortation : ENTER NOW!
A sweepstakes is a lottery in which the participants pay into a fund that becomes the prize. The term “sweepstakes” comes from the Middle English word “swepestake”, the name for the person who “sweeps up” all the stakes in a game.

21. Descend upon en masse : MOB
“En masse” is a French term, one that is best translated as “as a group”

23. Wearer of an “H”-inscribed hat : ASTRO
The Houston baseball team changed its name to the Astros (sometimes “’Stros”) from the Colt .45s in 1965 when they started playing in the Astrodome. The Astrodome was so called in recognition of the city’s long association with the US space program. The Astros moved from the National League to the American League starting in the 2013 season.

24. Snapchat’s ghost, e.g. : LOGO
Snapchat is a messaging system that allows users to send photos and video clips to a limited list of recipients. The photos and clips, called “snaps”, can be viewed for only a few seconds before they are deleted from the recipient’s device, and from the Snapchat servers.

26. Home to the Museum of El Greco : CRETE
Crete is the largest of the Greek Islands. Crete figures heavily in Greek mythology. Zeus was born in a cave at Mount Ida, the highest peak on the island. Crete was also home to the Labyrinth where the Minotaur was slain by Theseus. Icarus and Daedalus, after having crafted the Labyrinth, escaped from the island using wings that they crafted.

“El Greco” (“the Greek”, in Spanish) was the nickname of the artist whose real name was Domenikos Theotokopoulos. El Greco was born in Crete in 1541, and moved to Venice to study art when he was in his early twenties. A few years later he moved to the city of Toledo in central Spain, where he lived and worked for the rest of his life.

27. Lieutenant of 1970s TV : KOJAK
“Kojak” is a fun police drama that had an original run on TV from 1973 to 1978. The title character was NYPD Detective Lieutenant Theo Kojak, played by Telly Savalas. Famously, Kojak sucks away on Tootsie Pops as he tries to quit cigarettes. Kojak is assisted in his cases by Sergeant “Fatso” Stavros, a character played by George Savalas, Telly’s younger brother. Who loves ya, baby?

34. What some caddies carry : LOOSE TEA
A “caddy” is a container used for tea. “Caddy” comes from the Malay word “kati”, a unit of weight used as a standard by British tea companies in the East Indies.

35. The ___ Store : UPS
The franchised UPS Stores make up the world’s largest network of retail shipping, printing and business service centers. The first such outlets were branded and owned by Mail Boxes Etc., starting in 1980. UPS acquired Mail Boxes Etc. in 2001, and introduced the UPS Store brand in 2003. I’m a big fan …

37. Much-mimicked entertainer : ELVIS
Elvis Presley was born in Tupelo, Mississippi and moved to Memphis, Tennessee with his family when he was 13-years-old. Once he had achieved fame, Elvis purchased Graceland, the famous Memphis home that he used for himself and his family. I visited Graceland some years ago, and thoroughly enjoyed the experience.

42. Dodgers’ pursuers : T-MEN
A T-man is a law-enforcement agent of the US Treasury (T is for “Treasury”).

43. Like H-U-M-O-U-R : SPELT
Both “spelled” and “spelt” are valid past tenses for the verb “to spell”, although the former is way more common on this side of the Atlantic. I grew up with “spelt” on the other side of the pond, but its usage is rapidly being replaced by “spelled” in the UK and Ireland.

46. Major port near the Persian Gulf : BASRA
It’s quite a coincidence that the Iraqi city of Basra has a name that is an anagram of “Arabs”, isn’t it? Basra also features in the H. G. Wells science-fiction tale “The Shape of Things to Come”. Written in 1933, the storyline predicts a global conflict (WWII) that breaks out in 1940 lasting for ten years, after which chaos reigns as no victor emerges. Following worldwide plague, a benevolent dictatorship takes charge and the world moves towards a serene utopia. In time, the dictators are overthrown and peacefully retired, and the people of the Earth live happily ever after, all citizens of one global state with its capital in Basra in the Middle East.

48. Maker of hospital cuts : LANCET
“Lancet” is another name for a scalpel. There’s a publication called “The Lancet”, which is probably the world’s most respected medical journal. It is certainly the oldest, first published in 1823.

50. Airport monitor : TSA AGENT
The Transportation Security Administration (TSA) is the agency that employs the good folks that check passengers and baggage at airports.

Down
2. Shore line? : LAND HO!
The cry of “land ho!” from a sailor means that land has just been spotted. A similar shout is “sail ho!”, indicating that another boat has been spotted.

5. Rockefeller Center muralist : SERT
José Maria Sert was a painter of murals from Catalan. He was a good friend of fellow-artist Salvador Dali.

6. Actor Hunter or singer Hunter : IAN
Ian Hunter, as well as being the frontman for Mott the Hoople, wrote the song “Cleveland Rocks”, which was the anthem from “The Drew Carey Show”.

7. Sports stick : CROSSE
A lacrosse stick is also known as a crosse.

Even though lacrosse was dropped from the Olympics after the 1908 games, the sport is currently enjoying a resurgence of popularity outside of North America.

8. Application to a cut : ALUM
“Alum” is the common name for the chemical potassium aluminium sulfate. Styptic pencils can contain alum as the active ingredient that stems bleeding from a small cut. The alum acts as an astringent, a compound that shrinks some body tissues.

9. U. 2’s? : TAS
Teaching assistants (TAs) might be considered number-twos at a U (university).

10. Cartoon avatars on Snapchat : BITMOJIS
Snapchat is a messaging system that allows users to send photos and video clips to a limited list of recipients. The photos and clips, called “snaps”, can be viewed for only a few seconds before they are deleted from the recipient’s device, and from the Snapchat servers.

12. Some athletic footwear : REEBOKS
The brand name Reebok was adopted as the new company name for Foster Shoes of the UK in 1960. The name Reebok (more commonly “Rhebok”) is an Afrikaans word for an antelope, and comes from the term “roe buck”.

15. Big role for Liz Taylor : CLEO
The 1963 movie “Cleopatra” really was an epic work. It was the highest grossing film of the year, taking in $26 million dollars at the box office, yet it still lost money. The original budget for the film was just $2 million, but so many things went wrong the final cost swelled to a staggering $44 million dollars, making it the second most expensive movie ever made (taking into account inflation). Elizabeth Taylor was supposed to earn a record amount of $1 million for the film, and ended up earned seven times that amount due to delays. But she paid dearly, as she became seriously ill during shooting and had to have an emergency tracheotomy to save her life. The scar in her throat can actually be seen in some of the shots in the film.

20. Bistro offering : CREPE
“Crêpe” is the French word for “pancake”.

24. Big-box store founded in 1946 : LOWE’S
Lucius S. Lowe opened the first Lowe’s hardware store in 1921, in North Wilkesboro, North Carolina. Lucius only knew the one store, as it was family who expanded the company after he passed away in 1940.

26. Seminary study : CREED
A creed or credo is a confession of faith, or a system of belief or principles. “Credo” is Latin for “I believe”.

27. Single-serve coffee holders : K-CUPS
A K-Cup is a single-portion cup of coffee, tea or hot chocolate in which the beverage is prepared in situ. K-Cup packs are used with brewing machines made by Keurig, a manufacturer of coffee brewers based in Reading, Massachusetts. Personally, I use a Nespresso machine …

38. Competitor of Mt. Olive : VLASIC
Apparently, Vlasic invented the glass-packed, shelf-stable pickle. The company adopted the stork mascot in the late sixties, with the stork originally carrying a baby. The mascot was a play on the perception that pregnant women have a higher than average appetite for pickles.

40. Ankh-holding deity : AMEN-RA
Amun (also “Amon, Amen, Amun-Ra”) was a god in Egyptian mythology. Amun lends his name to our word “ammonia”. This is because the Romans called the ammonium chloride that they collected near the Temple of Jupiter Amun, “sal ammoniacus” (salt of Amun).

47. Michael who directed “The Insider” : MANN
Not only is Michael Mann a film director, but he also produced the Academy Awards ceremony twice, in 1999 and 2004.

Jeffrey Wigand was once vice president of research and development at the tobacco company Brown & Williamson. Famously, Wigand gave a “tell all” interview for television’s “60 Minutes” in which he described deliberate actions by his employers to increase the level of addiction of cigarette smokers. Wigand’s fascinating story was told in the 1999 movie “The Insider”, with Russell Crowe playing the whistle-blower.