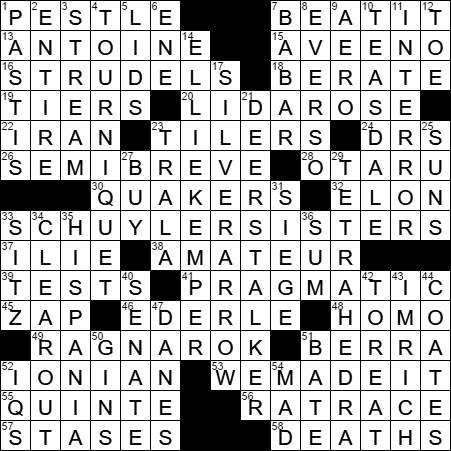 Today’s Wiki-est, Amazonian Googlies
Across
1. Meal maker? : PESTLE
I’ve always loved the sound of the words “mortar” and “pestle”, ever since I was first introduced to them in the chemistry lab. The Romans called a receptacle for pounding or grinding things a “mortarium”, giving us “mortar”. Mortarium was also the word for the product of pounding and grinding, which gives us our “mortar” that’s used with bricks to build a wall. And further, short stubby cannons used in the 16th century resembled a grinding bowl and so were called “mortars”, which evolved into our contemporary weapon of the same name. As far as the pestle is concerned, it is also derived from its Latin name “pistillum”, which comes from the word for “crush”.

13. Fats Domino’s real first name : ANTOINE
Antoine “Fats” Domino was born and raised in New Orleans, with Creole as his first language. He made into the big time in 1949 when he recorded an early rock and roll record called “The Fat Man”. That record sold over a million copies, the first rock and roll record to achieve that milestone.

15. Skin-care brand : AVEENO
Aveeno is a manufacturer of skincare and haircare products that was founded in 1945. The name Aveeno comes from the Latin name for the common oat: “Avena sativa”.

16. Austrian treats : STRUDELS
Strudel is a layered pastry that is usually sweet. The word “strudel” means “whirlpool, eddy” in German.

20. Barbershop staple from “The Music Man” : LIDA ROSE
“The Music Man” is a musical by Meredith Willson. The show was a big hit on Broadway in 1957. “The Music Man” won the first ever Grammy Award for the “Best Original Cast Album”. The show is set in the fictional River City, Iowa.

22. Shiraz setting : IRAN
The Iranian city of Shiraz has long been associated with wine, but there is no proven link between the city and the wine/grape we know today as “Shiraz” (also called “Syrah”). Having said that, some clay jars were found just outside of the city of Shiraz that contained wine; wine that was 7,000 years old!

23. Ones putting down quadrels : TILERS
A quadrel is a small square, usually one made of brick or tile.

26. Whole note, to a Brit : SEMIBREVE
Where I grew up a whole note is called a semibreve, and a half note is a minim.

28. Port on Ishikari Bay : OTARU
The Japanese city and port of Otaru is just a 25-minute drive northwest from Sapporo. Just like Sapporo, Otaru has a famous beer that shares the city’s name.

30. Friends : QUAKERS
Members of the Religious Society of Friends are known as Friends or Quakers. The Christian sect started in England in the 1640s, led by George Fox. The principal tenet at that point was that Christians could have direct experience of Jesus Christ without the mediation of clergy, a reflection of the increasing dissatisfaction with the established church at that time. The term “Quaker” is thought to have been used earlier in reference to foreign religious sects whose followers were given to fits of shaking during religious fervor. Somehow that term became used for members of the Religious Society of Friends.

33. Sibling trio in “Hamilton” : SCHUYLER SISTERS
Elizabeth “Eliza” Schuyler Hamilton was the wife of Founding Father Alexander Hamilton. Eliza was with her husband when he passed away the day after his famous duel with Vice President Aaron Burr.

46. Channel swimmer Gertrude : EDERLE
Gertrude Ederle was an American swimmer, from New York City. Ederle became the first woman to cross the English Channel, in 1926. Only five men had made the same swim before Ederle, with the fastest crossing being in 16 hours 33 minutes. Ederle blew that record out of the water (pun!), arriving in Dover in 14 hours 39 minutes.

48. ___ floresiensis (extinct “hobbit”) : HOMO
The literal translation of “Homo sapiens” from Latin is “wise or knowing man”. The Homo genus includes the species Homo sapiens (modern humans), but we’re the only species left in that genus. The last known species related to humans was Homo neanderthalensis (Neanderthal Man) which died off about 24,000 years ago. However, another species was discovered in Indonesia in 2003 that has been dubbed Homo floresiensis (Flores Man … sometimes called “hobbit”), and it may possibly have lived as recently as 12,000 years ago. Watch this space …

49. Day of doom, in Scandinavian mythology : RAGNAROK
Ragnarök is the name given to a set of events in Norse mythology that resulted in the deaths of many famous gods, including Odin and Thor.

51. “It’s déjà vu all over again” speaker : BERRA
Yogi Berra is regarded by many as the greatest catcher ever to play in Major League Baseball, and has to be America’s most celebrated “author” of malapropisms. Here are some greats:

52. Sea seen from Ithaca : IONIAN
The Ionian Sea is that part of the Mediterranean that lies between Greece and the southern part of Italy (under the sole of the “boot”). The Ionian Sea is one of the most seismically active areas on the planet.

56. Wearying work schedule : RAT RACE
We use “rat race” figuratively to describe an endless, pointless pursuit. The term comes from the laboratory, where one might imagine rats racing around a maze in search of some cheese.

58. Call of Duty tally : DEATHS
Call of Duty is a incredibly successful series of video games that started out life on computers and is now available for gaming consoles and handhelds. The first version of this war game was set in WWII, but other versions feature the likes of “Modern Warfare” and “Black Ops”.

Down
7. Big character in children’s literature : BABAR
“Babar the Elephant” originated in France, a creation of Jean de Brunhoff in 1931. The first book was “Histoire de Babar”, a book so successful it was translated into English two years later for publication in Britain and the US. Jean de Brunhoff wrote six more Babar stories before he died in 1937, and then his son Laurent continued his father’s work.

10. Poet Sara who wrote “I Shall Not Care” : TEASDALE
Sara Teasdale was a poet from St. Louis, Missouri although she spent much of her adult life in New York City. Examples of Teasdale’s most famous poems are “There Will Come Soft Rains” and “I Shall Not Care”. Teasdale committed suicide in 1933 by taking an overdose of sleeping pills.

29. Some pyramids, though not the ones at Giza : TETRAHEDRA
Giza is located on the west bank of the Nile, about 20 km southwest of Cairo. The nearby Giza Plateau is home to some of the most amazing ancient monuments on the planet, including the Great Pyramid of Giza and the Great Sphinx.

31. Drawn-out campaign : SIEGE
Our word “siege” comes from a 13th century word for a “seat”. The military usage derives from the concept of a besieging force “sitting down” outside a fortress until it falls.

33. ___ bath : SITZ
A “sitz bath” is one in which the water comes up to the hips. It is usually a therapeutic bath used to treat discomfort in the lower part of the body. The term comes from the German “Sitzbad” meaning a bath (“bad”) in which one sits. “Sitzen” is German for “to sit”.

34. Leave en masse : CLEAR OUT
“En masse” is a French term, one that is best translated as “as a group”

The Ebro is the longest river in Spain. The river was known by the Romans as the Iber, and it is the “Iber” river that gives the “Iberian” Peninsula its name.

36. Kakuro calculation : SUM
A Kakuro is a logic puzzle that requires the filling in of numbers in a crossword-style grid.

40. Group of 100 people : SENATE
The six-year terms enjoyed by US senators are staggered, so that every two years about one third of the 100 US Senate seats come up for reelection.

47. Builders of the original Legoland : DANES
Lego is manufactured by Lego Group, a privately held company headquartered in Billund, Denmark. The company was founded by a carpenter called Ole Kirk Christiansen in 1934 and the now-famous plastic interlocking blocks were introduced in 1949. The blocks were originally sold under the name “Automatic Binding Bricks” but I think “Lego” is easier to remember! The name “Lego” comes from the Danish term “leg godt” meaning “play well”.

There are currently six Legoland theme parks in the world, with two here in North America. One of the US parks is in Winter Haven, Florida and the other is in Carlsbad, California (which is the one that I’ve visited … a fun place).

50. Generates, with “up” : GINS
“To gin up” is a slang term meaning “to enliven, excite”. The term probably derives from the older “to ginger up”. Gingering up was the rather nasty practice of putting ginger up inside a horse to make it lively and move with a high tail.

51. Reduce in force or intensity : BATE
To bate is to restrain, as in “with bated breath”, with restrained breath. The term can also mean to lessen, and is a shortening of “abate”.

52. They’re high at M.I.T. and Stanford : IQS
Although it is correct these days to say that the abbreviation IQ stands for “intelligence quotient”, the term was actually coined by German psychologist William Stern, so it actually is an abbreviation for the German “Intelligenz-Quotient”.