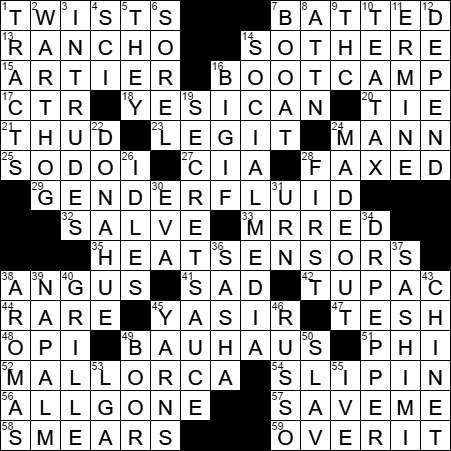 24. Michael who directed the 2015 film “Blackhat” : MANN
Not only is Michael Mann a film director, but he also produced the Academy Awards ceremony twice, in 1999 and 2004.

33. Old baseball mascot with a “C” on his cap : MR RED
The Red Scare (i.e. anti-communist sentiment) following WWII had such an effect on the populace that it even caused the Cincinnati baseball team to change its name from the Reds. The team was called the Cincinnati Redlegs from 1953-1958, as the management was fearful of losing money due to public distrust of any association with “Reds”.

35. Toaster components : HEAT SENSORS
The electric toaster is a Scottish invention, created by the Alan McMasters in Edinburgh in 1893.

38. Major beef source : ANGUS
The full name of the cattle breed is Aberdeen Angus, which is also the name used around the world outside of North America. The breed was developed by crossbreeding cattle from the counties of Aberdeenshire and Angus in Scotland. The breed stands out in the US as Angus cattle don’t have horns.

42. Big name in 1990s hip-hop : TUPAC
Rapper Tupac Amaru Shakur adopted the inventive stage name “2Pac”. He was a hard man, spending eleven months in prison for sexual assault. He was killed in a drive-by shooting in Las Vegas at only 25 years of age.

45. Co-Nobelist with Yitzhak and Shimon : YASIR
Yasser (also Yasir) Arafat was born in Cairo in 1929, the son of two Palestinians and the second-youngest of seven children. Arafat was beaten by his father as a child and so did not have a good relationship with him. Arafat did not attend his father’s funeral, nor did he visit his grave. The beatings were apparently administered because the young Arafat was repeatedly attending religious services in the Jewish quarter of Cairo. Arafat’s explanation was that he wanted to “study the mentality” of the Jewish people.

47. 2002 Grammy nominee John : TESH
John Tesh is a pianist and composer, as well as a radio and television presenter. For many years Tesh presented the show “Entertainment Tonight”. For “ET” he once covered the filming of an episode of “Star Trek: The Next Generation”. As part of the piece, he volunteered to act as a Klingon warrior. If you see the “Star Trek: TNG” episode called “The Icarus Factor” in reruns, watch out for John Tesh engaging in ritual torture with Mr. Worf as his victim.

49. School once headed by Mies van der Rohe : BAUHAUS
The literal translation to the term “Bauhaus” is “House of Building”. It was a school (meaning education establishment) that operated from 1919 to 1933. It became famous for its approach to design across many disciplines, everything from art to typography.

Ludwig Mies van der Rohe was a German architect who was routinely referred to simply as “Mies”. I am a philistine, I know, but Mies’ buildings look very plain to me. However, he did come up with two far-from-plain sayings, namely “less is more” and “God is in the details”.

52. Neighbor de Ibiza : MALLORCA
The Island of Majorca (“Isla Mallorca” in Spanish) is Spain’s largest island, and is located in the Mediterranean Sea. The population of the island ballooned over the past few decades as Majorca became a mecca for tourists from all over Europe.

Ibiza is a Mediterranean island almost 100 miles off the Spanish coast. It is a very popular tourist destination, largely for its legendary nightlife.

Down
1. Swift writings : TRACTS
Jonathan Swift was an Irish author and cleric. Swift is most famous perhaps for his 1726 novel “Gulliver’s Travels”, but we Irishmen also remember him as the Dean of St. Patrick’s Cathedral in Dublin. Swift was renowned for his wit and satire.

2. It has four tusks : WARTHOG
The warthog is a wild animal from the pig family found in Sub-Saharan Africa. The animal takes its name from four wart-like protrusions on its head that serve as a means of defense, but are also reserves of fat.

10. Impetus for a colonial “party” : TEA TAX
The famous destruction of tea in Boston Harbor to protest against the Tax Act took place on December 16, 1773. The action was referred to as the “destruction of the tea” for decades, and it wasn’t until 1834 that the term “Boston Tea Party” first appeared in print.

11. Wolverine’s cousin : ERMINE
The stoat has dark brown fur in the summer, and white fur in the winter. Sometimes the term “ermine” is used for the animal during the winter when the fur is white. Ermine skins have long been prized by royalty and are often used for white trim on ceremonial robes.

28. Who’s there : FIRST
Bud Abbott and Lou Costello made up the comedy duo Abbott and Costello who were immensely popular in the forties and fifties. Even when I was growing up in Ireland and knew nothing about baseball, I was rolling around the floor listening to Abbott and Costello’s famous “Who’s on First?” comedy routine. Can you name all the players

First Base: Who
Second Base: What
Third Base: I Don’t Know
Left field: Why
Center field: Because
Pitcher: Tomorrow
Catcher: Today
Shortstop: I Don’t Care/I Don’t Give a Darn

30. Green on the silver screen : EVA
Despite the English-sounding name, Eva Green is a French actress. Green played Bond girl Vesper Lynd in the 2006 movie “Casino Royale”, opposite Daniel Craig.

34. “Always one of a kind” sloganeer : DR PEPPER
Dr Pepper was introduced in 1885 in Waco, Texas, one year before the competing Coca-Cola was released to the market. I spent an entertaining few hours at the Dr Pepper Museum in Waco a while back.

36. One of a White House couple until 2017 : SASHA
Sasha is the younger of the two Obama children, having been born in 2001. She is the youngest child to reside in the White House since John F. Kennedy, Jr. moved in with his parents as a small infant. Sasha’s Secret Service codename is “Rosebud”, and her older sister Malia has the codename “Radiance”.

37. Dish often garnished with white radish : SASHIMI
“Sashimi” is thinly sliced raw fish, although it can also be raw meat. The word “sashimi” translates literally as “pierced body”, which may be a reference to the practice of sticking the tail and fin to sliced fish to identify it.

39. Flamethrower option : NAPALM
Napalm is a incendiary compound used in weapons that is made from petroleum mixed with a thickening agent. Napalm was developed in a secret program at Harvard during WWII. It was initially used in incendiary bombs and in flamethrowers. The thickening agent in napalm causes the burning material to stick to skin causing severe burns. Because of this, the UN declared the use of napalm in civilian areas a war crime in 1980.

45. Crocheter’s collection : YARNS
Crochet is the process of making a fabric using a hooked needle called a crochet hook. “Crochet” is a French word meaning “hook”.

46. Rene of “Nightcrawler” : RUSSO
The lovely and very talented actress Rene Russo is a native of Burbank, California. Russo went to highschool (with actor/director Ron Howard), but dropped out in tenth grade. At seventeen, she was given the opportunity to train as a model and within a very short time appeared on the cover of “Vogue”. As her modelling jobs slowed down in her early thirties, Russo made a career change and studied theater and acting. I am so glad she did, as Rene Russo is one of my favorite actresses …

“Nightcrawler” is a thought-provoking crime film starring Jake Gyllenhaal as a videographer who shoots live footage of accidents and crimes. I recommend this one …

50. Bulgarian, e.g. : SLAV
The Slavic peoples are in the majority in communities covering over half of Europe. This large ethnic group is traditionally broken down into three smaller groups:

Bulgaria is a European country located west of the Black Sea. Bulgaria became a one-party socialist state aligned with the Soviet Union after WWII, but transitioned to democracy in December 1989 following end of Communist rule. The capital and largest Bulgarian city is Sofia.

53. Big Apple airport code : LGA
Fiorello La Guardia was the Mayor of New York from 1934 to 1945, racking up three full terms in office. The famous airport that bears La Guardia’s name was built at his urging, stemming from an incident that took place while he was in office. He was taking a TWA flight to “New York” and was outraged when the plane landed at Newark Airport, in the state of New Jersey. The Mayor demanded that the flight take off again and land at a small airport in Brooklyn. A gaggle of press reporters joined him on the short hop and he gave them a story, urging New Yorkers to support the construction of a new commercial airport within the city’s limits. The new airport, in Queens, opened in 1939 as New York Municipal, often called “LaGuardia” as a nickname. The airport was officially relabeled as “LaGuardia” (LGA) in 1947.