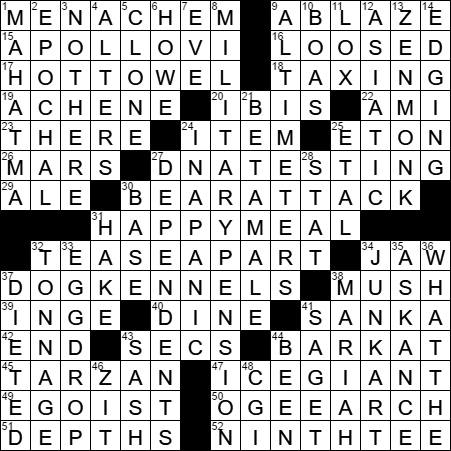 Today’s Wiki-est, Amazonian Googlies
Across
1. Begin at the beginning? : MENACHEM
Menachem Begin was Prime Minister of Israel from 1977 to 1983. Perhaps most notably, Begin signed a peace treaty with Egypt in 1979, following the Camp David Accords of 1978. This agreement earned Begin and Egyptian president Anwar Sadat the Nobel Peace Prize.

15. Launch of April 1968 : APOLLO VI
In NASA’s Apollo program, the Apollo 6 space flight of April 1968 was the last of the unmanned Apollo test missions. The primary objective of the mission was to test the ability of the Saturn V launch vehicle to propel the Command Module with sufficient momentum to reach the Moon.

19. Seed of a strawberry or sunflower : ACHENE
An achene is a simple, one-seeded dry fruit that is produced by some flowering plants. The so-called “seeds” of strawberries are actually achenes. The strawberry’s seed is found inside the achene. The strawberry itself is an aggregate fruit with lots of achenes that are attached to accessory tissue, albeit very delicious accessory tissue.

20. National bird of Trinidad and Tobago : IBIS
The ibis is a wading bird that was revered in ancient Egypt. “Ibis” is an interesting word grammatically speaking. You can have one “ibis” or two “ibises”, and then again one has a flock of “ibis”. And if you want to go with the classical plural, instead of two “ibises” you would have two “ibides”!

22. Jules or Jim, in “Jules et Jim” : AMI
“Jules and Jim” is a French film directed by François Truffaut that was released in 1962. The movie tells the story of two friends Jules and Jim who get involved in a complex love triangle with a woman called Catherine.

24. Two stars, perhaps : ITEM
An unmarried couple known to be involved with each other might appear in the gossip columns. This appearance as “an item” in the papers, led to the use of “item” to refer to such a couple, but only since the very early seventies.

25. Very old school : ETON
The world-famous Eton College is just a brisk walk from Windsor Castle, which itself is just outside London. Eton is noted for producing many British leaders including David Cameron who took power in the last UK general election. The list of Old Etonians also includes Princes William and Harry, the Duke of Wellington, George Orwell, and the creator of James Bond, Ian Fleming (as well as 007 himself as described in the Fleming novels).

29. Half of a black and tan : ALE
The alcoholic drink known as a “half-and-half” is 50-50 mix of two different types of beer. Back in Ireland a half-and-half is made from an Irish ale on the bottom with Guinness floated on top. Over here you might see that combination referred to as a “Black and Tan”, but we tend to avoid that reference in my homeland. The Black and Tans were British paramilitary units deployed in Ireland in the early 1920s to suppress the movement for independence. They weren’t very good guys …

31. Fast-food order placed millions of times a day worldwide : HAPPY MEAL
The McDonald’s Happy Meal was introduced in 1977. The Happy Meal was inspired by a selection of food designed in a Guatemalan McDonald’s to suit children that was called “Menu Ronald”. The toys in Happy Meals often tie-in with some movie and so are part of an advertising campaign.

37. Greyhound destinations? : DOG KENNELS
Greyhound dogs were originally bred for coursing game, and today are bred for greyhound racing. Coursing is the pursuit of game by sight, rather than scent. As such, coursing dogs like greyhounds are often referred to as “sighthounds”.

39. O’Neill contemporary : INGE
Playwright William Inge had a run of success on Broadway in the early fifties. Inge’s most celebrated work of that time was the play “Picnic”, for which he was awarded a Pulitzer Prize. The original 1953 cast of “Picnic” included a young male actor making his debut on Broadway. His name was Paul Newman. Many of Inge’s works are set in the American heartland and so he became known as the “Playwright of the Midwest”.

The playwright Eugene O’Neill was born in a New York City hotel room in what is now called Times Square, in 1888. That building no longer exists and there is a Starbucks on the site today, but you can go take a look at the commemorative plaque at the Northeast corner of 43rd and Broadway. O’Neill died in 1953, in room 401 of the Sheraton Hotel on Bay State Road in Boston. His last words were, “I knew it. I knew it. Born in a hotel room, and God damn it, died in a hotel room.” Eugene O’Neill won a Pulitzer for his play “Anna Christie”.

41. Fitting coffee order on a submarine? : SANKA
The first successful process for removing caffeine from coffee involved steaming the beans in salt water, and then extracting the caffeine using benzene (a potent carcinogen) as a solvent. Coffee processed this way was sold as Sanka here in the US. There are other processes used these days, and let’s hope they are safer …

45. Character of book and film who was born John Clayton III : TARZAN
In the stories by Edgar Rice Burroughs, Tarzan of the Apes was actually Englishman John Clayton, Viscount Greystoke.

47. Uranus or Neptune : ICE GIANT
The eight planets of our solar system can be sorted into two categories. Mercury, Venus, Earth and Mars are “terrestrials” as they are largely composed of rock. Jupiter, Saturn, Uranus and Neptune are “gas giants”, as they are largely composed of gaseous material. Uranus and Neptune can be called “ice giants”, a subcategory of gas giants. Ice giants have a lower mass than other gas giants, with very little hydrogen and helium in their atmospheres and a higher proportion of rock and ice.

50. Gothic architecture feature : OGEE ARCH
An ogee is a type of S-curve. Specifically it is a figure consisting of two arcs that curve in opposite directions (like an S) but both ends of the curve end up parallel to each other (which is not necessarily true for an S). An ogee arch is composed of two ogees, with one being the mirror of the other and meeting at the arch’s apex.

51. Davy Jones’s locker, with “the” : DEPTHS
No one is really sure why the phrase “Davy Jones’s Locker” is used to refer to the bottom of the sea, but the first known reference to the idiom was made in “The Adventures of Peregrine Pickle” published in 1751, written by Scottish author Tobias Smollett. It is clear however, that Davy Jones is a euphemism for the devil or god of the seas.

52. Spot almost halfway through a course : NINTH TEE
There’s an urban myth that the standard number of holes on a golf course is 18 because it takes 18 shots to polish off a fifth of scotch whisky. However, the truth is that the standard number of holes in the Old Course at St. Andrews in Scotland happened to settle down over time at 18, and that standard was adopted all around the world.

Down
1. Epithet meaning “great soul” : MAHATMA
Mohandas Gandhi was a political and spiritual leader in India in the first part of the 20th century, as the country sought independence from Britain. He was also referred to as “Mahatma”, meaning “great soul”. His remarkable philosophy of nonviolence and living a modest lifestyle was a great inspiration to the Indian people. India (and Pakistan) was granted independence in 1947. Tragically, Gandhi was assassinated the very next year.

6. Victor at Brandywine : HOWE
William Howe, 5th Viscount Howe fought during the American War of Independence, eventually rising to Commander-in-Chief of the British forces. Howe was in charge when the British took New York and Philadelphia, but also when the Saratoga campaign failed and the French entered the war. Howe resigned his post in 1777 and sailed back to England. Despite being censured for his actions in North America, Howe carved out a successful military and political career for himself in later years.

7. Forerunner in a race? : EVE
I guess the reference here is to Eve, wife of Adam.

11. Deli supply : LOX
Lox is a brine-cured salmon fillet, finely sliced. The term “lox” comes into English via Yiddish, and derives from the German word for salmon, namely “Lachs”.

12. Like the Golden Horde : ASIATIC
The Golden Horde was a group of Mongols who ruled over what is now Russia, Ukraine, Kazakhstan, Moldova and the Caucasus, from the 1240s until 1502. It has been suggested that the name of the group derives from the yellow tents used by the rulers of the Golden Horde. And, the Golden Horde’s influence and rule led to the term “horde” entering the English language, via many languages spoken in Slavic Eastern Europe.

13. Koan contemplator : ZEN MONK
The concept of koan appears in the Zen Buddhist tradition. A koan is a story, question or perhaps a statement that is used as an aid to meditation. It often takes the form of a problem or riddle that has no logical solution and is intended to help the meditator break free of reason and develop intuition.

31. Relative of a cod : HAKE
Hake is a commonly eaten fish in Europe, with half of all the hake consumed in Spain.

In the British Isles, the most common fish that is used in traditional “fish and chips” is Atlantic cod. Cod has been overfished all over the world, and is now considered to be an endangered species by many international bodies. Confrontations over fishing rights in the North Atlantic led to conflicts called “the Cod Wars” between Iceland and the UK in the 1950s and the 1970s, with fishing fleets being protected by naval vessels and even shots being fired.

38. “___ Carey,” 9x platinum 1990 album : MARIAH
Mariah Carey produced her first album in 1990 under the guidance of Tommy Mottola, an executive at Columbia Records. Mottola and Carey must have hit it off, because they were married three years later (although Mottola is now married to a different singer …).

41. Bob who narrated “How I Met Your Mother” : SAGET
Bob Saget is a real enigma to me. He made a name for himself playing very sugary roles in TV shows like “Full House” and “America’s Funniest Home Videos”, and yet in the world of stand-up comedy he is known for very blue and raunchy routines.

46. Bad spot : ZIT
The slang term “zit”, meaning “pimple”, came into the language in 1966, but no one seems to know its exact derivation.