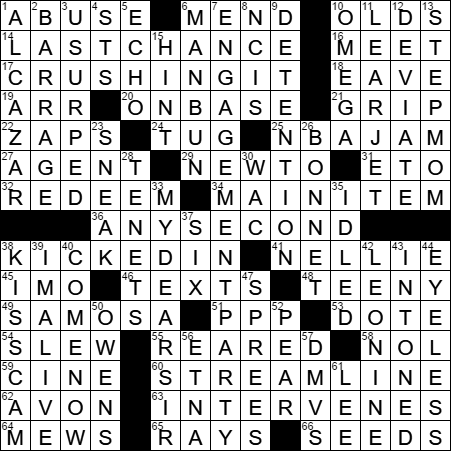 25. Classic arcade game with a glass backboard that shatters : NBA JAM
NBA Jam is an arcade game that was introduced in 1993. It was successful enough to spawn a whole series of NBA Jam video games. Apparently is became the highest-earning arcade game of all time, and took in over $1 billion dollars in quarters.

27. 86 or 99 : AGENT
The satirical comedy series called “Get Smart” was the creation of Mel Brooks and Buck Henry, and starred Don Adams as Agent 86, Maxwell Smart. Agent 86 worked for the spy agency CONTROL, alongside the lovely Agent 99. CONTROL’s sworn enemy was the criminal organization called KAOS. Smart’s shoe phone was a hilarious prop used in almost every episode. When Smart dialed the number 117, the shoe converted into a gun. Cool stuff …

34. Agenda-topping issue : MAIN ITEM
“Agenda” is a Latin word that translates as “things to be done”, coming from the verb “agere” meaning “to do”.

46. Messages with emojis : TEXTS
An emoji is a character found on many cell phones now that is much like an emoticon, but more elaborate.

49. Savory Indian appetizer : SAMOSA
A samosa is quite a tasty appetizer, usually a triangular-shaped savory that often has a vegetarian filling. The word “samosa” is primarily used on Indian menus, and the name comes from “sanbosag”, the name for the dish in Persia.

54. Abundance : SLEW
Our usage of “slew” to mean “large number” has nothing to do with the verb “to slew”. The noun “slew” come into English in the early 1800s from the Irish word “sluagh” meaning “host, crowd, multitude”.

58. ___ pros. (lawsuit abbr.) : NOL
“Nolle prosequi” is a Latin phrase that translates literally as “to be unwilling” (nolle) “to pursue” (prosequi). In the arena of law, a declaration of nolle prosequi (shortened to nol. pros.) by a plaintiff or prosecutor is a declaration that all or part of the case will be dropped.

62. What makes consumers blush? : AVON
In 1886, a young man called David McConnell was selling books door-to-door. To enhance his sales numbers he was giving out free perfume to the ladies of the houses that he visited. Seeing as his perfume was more popular than his books, he founded the California Perfume Company in New York City and started manufacturing and selling across the country. The company name was changed to Avon in 1939, and the famous “Avon Calling” marketing campaign was launched in 1954.

66. They’re favorites : SEEDS
A “seeded” player or team in a tournament is one given a preliminary ranking that is used in the initial draw. The intention is that the better competitors do are less likely to meet each other in the early rounds.

Down
1. Moorish castle : ALCAZAR
An alcázar is a type of castle in Spain and Portugal that was built during the period of Moorish rule. The Spanish term “alcázar” comes from the Arabic word “al-qasr” meaning “fort, castle”.

3. Wrongly assumed : USURPED
To usurp is to seize and hold by force, say the power or authority of a ruler. The term “usurp” comes to us from Latin via French, from “usus” (a use) and “rapere” (to seize).

5. Voice-activated Amazon device : ECHO
Amazon Echo is a voice-controlled hardware device that can be used to provide several services including playing radio programs and music, recording of shopping lists, and managing a calendar. The device just sits say in the home listening, until it hears a “wake up” command.

The Men’s magazine known today as “GQ” used to be titled “Gentlemen’s Quarterly”, and before that was called “Apparel Arts” when it was launched in 1931.

10. Competitor of Cartier : OMEGA
Omega is a manufacturer of high-end watches based in Switzerland. An Omega watch was the first portable timepiece to make it to the moon.

11. Means of travel for a V.I.P. : LEARJET
Learjet is a company making business jets that was founded in 1960 by William Powell Lear. The original Learjet was a modified Swiss ground-attack fighter aircraft.

15. Soupçon : HINT
“Soupçon” translates literally from French into English as “suspicion”, and can be used in the sense that a “suspicion” of something is a just a hint, a crumb.

30. W.W. II service member : WAC
The Women’s Army Auxiliary Corps (WAAC) was formed in 1942, and the unit was converted to full status the following year to become the Women’s Army Corps (WAC). Famously, General Douglas MacArthur referred to the WACs as his “best soldiers”, saying they worked harder, complained less and were better disciplined than men. The WACs were disbanded in 1978 and the serving members were integrated into the rest of the army.

35. Dogged it : IDLED
“To dog it” is a slang term meaning to not expend the effort necessary to accomplish a task. Folks tell me that the expression is quite common, but I must confess that I personally haven’t heard it used outside of crosswords. I’ll have to listen more carefully in the future …

38. What motivates people to get to first base during a game? : KISS CAM
The “kiss cam” is a diversion during some sporting events in which a video camera picks out random couples in the crowd, projecting their image onto the giant screen at the venue. The couples are encouraged to kiss, for the entertainment of the fans. Famously, President Barack Obama and First Lady Michelle Obama kissed for the kiss cam at a basketball game a few years ago, as did former President Jimmy Carter and former First Lady Rosalynn Carter.

42. Strong and majestic : LEONINE
Something described as “leonine” has the characteristics of a lion, is strong and regal. “Leo” is Latin for “lion”.

50. Eponym of USA Track & Field’s highest award : OWENS
The Jesse Owens Award is presented annually by USA Track and Field to recognize the season’s top male participant in the sport. The female version of the award is the Jackie Joyner-Kersee Athlete of the Year Award.

56. View from Catania : ETNA
Catania is the second largest city on the island of Sicily (after Palermo). Catania has a long and rich cultural history, and today is best known as a center for technology industries earning it the nickname of the “European Silicon Valley”.