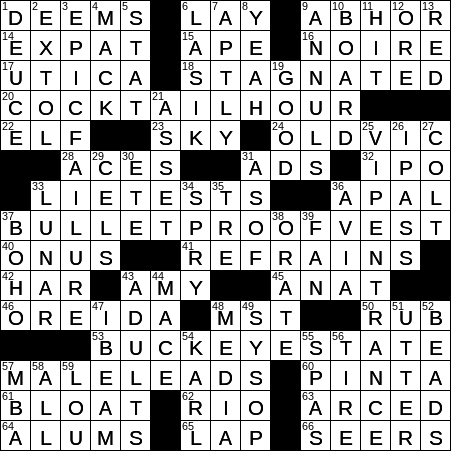 57A. Certain Hollywood stars … or an apt title for this puzzle : MALE LEADS

15. Gibbon or gorilla : APE
Apes and monkeys both belong to the order of primates. The most obvious way to distinguish apes from monkeys is by the presence or lack of a tail. Almost all apes have no tail, and almost all monkeys have tails.

The gorilla is the largest primate still in existence, and is one of the nearest living species to humans. Molecular biology studies have shown that our nearest relatives are in fact the species in the genus Pan (the chimpanzee and the bonobo), which split from the human branch of the family 4-6 million years ago. Gorillas and humans diverged at a point about 7 million years ago. The term “gorilla” derives from the Greek “gorillai” meaning “tribe of hairy women”. Wow!

16. Bête ___ (pet peeve) : NOIRE
“Bête noire” translates from French as “black beast” and is used in English to describe something or someone that is disliked.

17. City in upstate New York : UTICA
Utica in New York is known as “Second Chance City” these days, due to the recent influx of refugees from war-torn parts of the world and from Bosnia in particular. These immigrants have helped revitalize the area and reverse a trend of population loss.

18. Got stuck in a rut : STAGNATED (leading with “stag”)
A male deer is usually called a buck, and a female is a doe. However, the male red deer is usually referred to as a stag. The males of even larger species of deer are often called bulls, and females cows. In older English, male deer of over 5 years were called harts, and females of over 3 years were called hinds. The young of small species are known as fawns, and of larger species are called calves. All very confusing …

20. Time before dinner for socializing : COCKTAIL HOUR (leading with “cock”)
Our word “cocktail” first appeared in the early 1800s. The exact origin of the term is not clear, but it is thought to be a corruption of the French word “coquetier” meaning “egg cup”, a container that was used at that time for serving mixed drinks.

24. Venerable London theater : OLD VIC
The Old Vic is a very famous theater (or I should I say “theatre”?) in London, previously known as the Royal Coburg Theatre and then the Royal Victorian Theatre (giving it the current name “The Old Vic”). The theater owes a lot of its fame and standing to the fact that it housed the National Theater of Great Britain after it was founded in 1963 by Sir Laurence Olivier. Today the National Theater has new, modern premises, but the Old Vic Theatre Company stills garners a lot of attention. The current, and very energetic, artistic director of the company is American actor, Kevin Spacey.

28. Hero war pilots : ACES
A flying ace is an aviator who has shot down a number of enemy planes during combat. The qualifying number of kills seems to vary, but five is common. The first use of “ace” was during WWI when the French newspapers dubbed pilot Adolphe Pegoud “l’as” (French for “the ace”) when he shot down his fifth German plane.

31. Source of most of Google’s revenue : ADS
Google is a remarkably successful and profitable technology company. Google makes most of its money from it AdWords product. Advertisers pay Google a lot of money to place their ads at the most advantageous spots on the Internet.

32. 2004 event for Google, for short : IPO
An Initial Public Offering (IPO) is the very first offer of stock for sale by a company on the open market. In other words, an IPO marks the first time that a company is traded on a public exchange. Companies have an IPO to raise capital to expand (usually).

33. Polygraphs : LIE TESTS
We are most familiar with the term “polygraph” as the generic name for a lie detector instrument. This usage began in 1921, although the term had been around since the end of the 18th century. Back then, a polygraph was a mechanical device use to make multiple copies as something was written or drawn. Famously, Thomas Jefferson used a polygraph to preserve copies of letters that he wrote to correspondents.

43. Stand-up comic Schumer : AMY
Amy Schumer is a stand-up comedian, and an alumna of the reality TV show “Last Comic Standing”, in which she placed fourth. Schumer now has her own comedy series “Inside Amy Schumer”, which airs on Comedy Central. Amy is a first cousin once removed of Chuck Schumer, the senior US Senator from New York.

46. Maker of Mashed Potato Bites : ORE-IDA
Ore-Ida frozen foods are all made using potatoes. The company is located in Oregon, just across the border from Idaho. “Ore-Ida” is a melding of the two state names.

53. Ohio’s nickname : BUCKEYE STATE (leading with “buck”)
Ohio is sometimes referred to as the Buckeye State, taking the name from the state tree. In turn, the buckeye tree gets its name from the appearance of its fruit, a dark nut with a light patch, thought to resemble a “buck’s eye”.

60. Companion ship for the Niña and Santa Maria : PINTA
Famously, Christopher Columbus used three ships in his first voyage across the Atlantic: the Santa Maria, the Niña and the Pinta. The Pinta was the fastest of the three, and it was from the Pinta that the New World was first spotted, by a sailor named Rodrigo de Triana who was a lookout on the fateful day. Pinta was a nickname for the ship that translated as “the painted one”. The Pinta’s real name has been lost in mists of time.

62. Locale of Phelps’s last five gold medals : RIO
Michael Phelps is a competitive swimmer from Towson, Maryland. Phelps won 28 medals in total in the five Olympic Games in which he has competed from 2004 to 2016. Those 28 medals make him the most decorated Olympian of all time, by far. Coming in second is former Soviet gymnast Larisa Latynina, who won won 18 medals between 1956 and 1964.

Down
1. Card with two pips : DEUCE
A “two” playing card might be called a “deuce”, from the Middle French “deus” (or Modern French “deux”) meaning “two”.

4. “___ the Knife” : MACK
“Die Moritat von Mackie Messer” is the original name of the song “Mack the Knife”, taken from “The Threepenny Opera”. “The Threepenny Opera” (“Die Dreigroschenoper”) is a musical written by Bertolt Brecht and Kurt Weill that first performed in Berlin in 1928, an adaptation of “The Beggar’s Opera” written by Englishman John Gay in the 18th century. “Mack the Knife” was introduced into the popular music repertoire by Louis Armstrong. He had a hit with it in 1956, but it was the Bobby Darin recording of 1959 that came to be known as the definitive, English-language version of the song. I love it …

5. “Right away!,” in the E.R. : STAT!
The exact etymology of “stat”, a term meaning “immediately” in the medical profession, seems to have been lost in the mists of time. It probably comes from the Latin “statim” meaning “to a standstill, immediately”. A blog reader has helpfully suggested that the term may also come from the world of laboratory analysis, where the acronym STAT stands for “short turn-around time”.

6. Vision-correcting procedure : LASIK
LASIK surgery uses a laser to reshape the cornea of the eye to improve vision. The LASIK acronym stands for “laser-assisted in situ keratomileusis”.

10. What chess is played on : BOARD
It is believed that the game of chess originated in northwest India, evolving from a 6th-century game called “chaturanga”, a Sanskrit word meaning “four divisions”. These four (military) divisions were represented in the game:

27. Stallion-to-be : COLT
There are lots of terms to describe horses of different ages and sexes, it seems:

29. Cartoon frames : CELS
In the world of animation, a cel is a transparent sheet on which objects and characters are drawn. In the first half of the 20th century the sheet was actually made of celluloid, giving the “cel” its name.

30. Summer, in Soissons : ETE
Soissons is an ancient town in northern France, located about 60 miles northeast of Paris.

36. Reebok competitor : AVIA
The Avia brand name for athletic shoes was chosen as “avia” is the Latin word for “to fly”, and suggests the concept of aviation. Avia was founded in Oregon in 1979.

37. ___-chic (fashion style) : BOHO
Boho-chic is a style of fashion that grew out of the bohemian and hippie looks.

39. Whirrer on a muggy day : FAN
Our term “muggy” means warm and humid, and comes from the Old Norse word “mugga” that describes “drizzling mist”.

43. Whom R-rated movies are intended for : ADULTS
The Motion Picture Association of America’s (MPAA) film-rating system (PG-13, R, etc.) is purely voluntary and is not backed by any law. Movie theaters agree to abide by the rules that come with the MPAA ratings in exchange for access to new movies.

44. Spray for self-defense : MACE
“Mace” is actually a brand name, originally introduced by Lake Erie Chemical when they started to manufacture “Chemical Mace”, with the name being a play on the club-like weapon from days of old. Mace was originally a form of tear gas, but Mace today uses a formula that is actually a pepper spray, a different formulation.

54. Marx who wasn’t one of the Marx Brothers : KARL
Karl Marx was a German philosopher and revolutionary who helped develop the principles of modern communism and socialism. Marx argued that feudal society created internal strife due to class inequalities which led to its destruction and replacement by capitalism. He further argued that the inequalities created in a capitalist society create tensions that will also lead to its self-destruction. His thesis was that the inevitable replacement of capitalism was a classless (and stateless) society, which he called pure communism.

Michael Bloomberg served as Mayor of New York City from 2002 to 2013. He is an incredibly rich man, having accumulated his wealth as the founder and majority owner of a global financial data and media company that bears his name. Bloomberg was a Democrat and then switched allegiance to the Republican Party just prior to running for Mayor of New York. He left the Republican Party in 2007 and was re-elected as Mayor in 2009 as an Independent.

59. “Skip to My ___” : LOU
“Skip to My Lou” is a children’s dance that can also be used at a barn dance as an icebreaker. Couples dance to the tune, with an extra male in the middle of the group. The odd man “steals” a lady with whom to dance, leaving her partner to find another. The word “lou” is the Scottish for “love”.