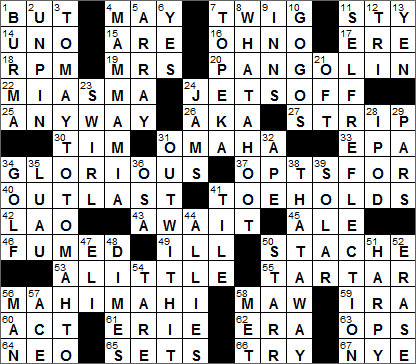 CROSSWORD SETTER: Tom McCoy
THEME: Self-Reflection … each of today’s themed answers uses only letters that exhibit mirror symmetry, that are SELF-REFLECTING. We can draw a line right down the center of these answers, and the left side line of the line is the mirror image of the right side:

Today’s Wiki-est, Amazonian Googlies
Across
4. Peter Parker’s aunt in “Spider-Man” : MAY
Aunt May and Uncle Ben Parker are characters in the spider-Man universe created by Marvel Comics. The couple’s nephew is Peter Parker, aka Spider-Man.

14. Card game call : UNO
In my youth I remember being taught a great card game, by a German acquaintance of mine, called Mau Mau. Years later I discovered that Uno is basically the same game, but played with a purpose-printed deck instead of the regular deck of playing cards that’s used for Mau Mau. I hear that Mau Mau is derived from the game called Crazy Eights.

20. Scaly anteater : PANGOLIN
The pangolin is also known as the scaly anteater. It is the only mammal that has a layer of protective scales made from keratin that covers the skin. Pangolins are highly prized by hunters, for their meat and their armor. They are in danger of extinction, and yet there is no more highly-trafficked species on the planet.

22. Unpleasant atmosphere : MIASMA
The word miasma was first used for the poisonous atmosphere thought to arise from swamps and rotting matter, and which could cause disease. Nowadays, a miasma is just a thick cloud of gas or smoke.

31. The Wizard of ___ (nickname of Warren Buffett) : OMAHA
Warren Buffett is one of my heroes, a man with the nickname “Wizard of Omaha”. Despite being one of the wealthiest men in the world, he lives a relatively frugal and modest life. Buffett also has a very Jeffersonian attitude towards the role his wealth plays within his family. He has set up his estate so that his children get enough money to be independent, but the vast majority of his assets are going to charity, both before and after he dies.

42. Southeast Asian language : LAO
Lao, the language of Laos, does not use spaces between words (or periods!), although this is apparently changing. Spaces are used between sentences and clauses.

50. Something just under one’s nose, slangily : STACHE
“Stache” is slang for “mustache”.

55. ___ sauce : TARTAR
Tartar sauce is basically mayonnaise with some chopped pickles, capers and onion or chives. The recipe was invented by the French (as “sauce tartare”) with the name somehow linked to the Tatars, a people who once occupied Ukraine and parts of Russia.

56. Fish also known as a dorado : MAHI-MAHI
Mahi-mahi is the Hawaiian name for the dolphin-fish, also called a dorado. The mahi-mahi is an ugly looking creature if ever I saw one …

59. Glass of “This American Life” : IRA
“This American Life” is a radio show that is broadcast weekly on National Public Radio (NPR). Host of the show is the much-respected Ira Glass. I was interested to learn that one of my favorite composers, Philip Glass, is Ira’s first cousin.

61. City of NW Pennsylvania : ERIE
Erie is a city in the very north of Pennsylvania, right on the southern shore of Lake Erie. The city takes its name from the Erie Native American tribe that resided in the area.

65. Match makeup : SETS
There might be three or five sets in a tennis match.

Down
1. “The Bridge on the River Kwai” locale : BURMA
The river referred to in the movie (and novel) “The Bridge on the River Kwai” is actually called the Khwae Yai River, and is in western Thailand. The original novel by Pierre Boulle was published in French in 1952, and the wonderful movie released in 1957. Both tell the story of construction of part of the Burma Railway and a bridge over the river, using prisoners of war as laborers. The film stars William Holden, Alec Guinness and Jack Hawkins.

4. *Musical that includes the song “Take a Chance on Me” : MAMMA MIA!
The hit musical “Mamma Mia!” was written to showcase the songs of ABBA. I’m a big fan of ABBA’s music, so I’ve seen this show a couple of times and just love it. “Mamma Mia!” is such a big hit on the stage that on any given day there are at least seven performances going on somewhere in the world. There is a really interesting film version of the show that was released in 2008. I think the female lead Meryl Streep is wonderful in the movie, but the male leads … not so much! By the way, one can tell the difference between “Mamma Mia” the ABBA song and “Mamma Mia!” the musical, by noting the difference in the punctuation in the titles.

5. Panoply : ARRAY
“Panoply” originally described the complete set of armor of a warrior, with the term coming from the Greek “pan-”meaning “all” and “hopla” meaning “arms”. We’ve been using “panoply” to mean “any splendid array” since the 1820s.

7. 19th-century Midwest rail hub : TOPEKA
Topeka is the capital of Kansas, and is located on the Kansas River in the northeast of the state. The name “Topeka” was chosen in 1855 and translates from the Kansa and the Ioway languages as “to dig good potatoes”. The reference isn’t to the common potato but rather to the herb known as the prairie potato (also “prairie turnip”), which was an important food for many Native Americans.

10. Group with the 1981 #1 album “Beauty and the Beat” : GO-GO’S
The Go-Go’s are an all-female rock band that was formed in Los Angeles back in 1978. The band’s biggest hit was “We Got the Beat”, which was released in 1982. The best-known member of the Go-Go’s is probably Belinda Carlisle.

11. Activity on Lent or Yom Kippur … or a quality of every letter in the answer to each starred clue : SELF-REFLECTION
In Latin, the Christian season that is now called Lent was termed “quadragesima” (meaning “fortieth”), a reference to the forty days that Jesus spent in the desert before beginning his public ministry. When the church began its move in the Middle Ages towards using the vernacular, the term “Lent” was introduced. “Lent” comes from “lenz”, the German word for “spring”.

Yom Kippur is the holiest day of the year for the Jewish people and is also known as the Day of Atonement.

28. Apple’s ___ Touch : IPOD
The iPod Touch is a portable media player, personal digital assistant and gaming console with a WiFi capability. Essentially I think it’s a stripped-down version of an iPhone.

35. Party with poi : LUAU
Nowadays the word “luau” denotes almost any kind of party on the Hawaiian Islands, but to the purist a luau is a feast that always includes a serving of “poi”, the bulbous underground stems of taro baked with coconut milk.

44. Axis foe : ALLIES
Before WWII, Hungary’s prime minister was lobbying for an alliance between Germany, Hungary and Italy and worked towards such a relationship that he called an “axis”. The main Axis powers during the war were Germany, Italy and Japan. However, also included in the relationship were Romania, Bulgaria and the aforementioned Hungary.

50. Rock’s All-___ Band : STARR
The All-Starr Band is a supergroup led by former Beatles drummer Ringo Starr. The group has been active since 1989.

51. Monster encountered by Aeneas : HARPY
In Greek mythology, a harpy was a winged spirit noted for stealing food from a king called Phineus. Phineas angered the god Zeus and so was punished by being exiled to an island with a buffet of food that he could never eat. Every time he tried to eat, harpies would arrive and steal the food. We use the term today for a shrewish woman or a predatory person.

In Roman mythology, Aeneas was a Trojan who traveled to Italy and became the ancestor Romulus and Remus, and thus the ancestor of all Romans. Aeneas’s story is told in Virgil’s epic poem “The Aeneid”.

54. Scale deduction : TARE
“Tare” is the weight of a container that is deducted from the gross weight to determine the net weight, the weight of the container’s contents.