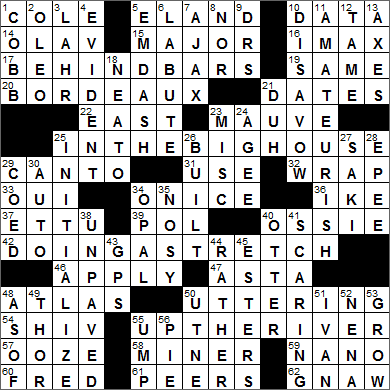 CROSSWORD SETTER: Patrick Berry
THEME: Incarcerated … each of today’s themed answers is a slang phrase meaning “incarcerated, in prison”. The clue makes reference to a more literal meaning of each phrase, and alludes to a rather unlikely crime that led to the incarceration:

5. Antelope with twisty horns : ELAND
An eland is a large African antelope, in fact the largest on the continent. Both male and female elands have horns, and those horns have a steady spiral ridge along their length.

14. Name shared by five Norwegian kings : OLAV
Of the many kings of Norway named Olaf/Olav (and there have been five), Olaf II is perhaps the most celebrated as he was canonized and made patron saint of the country. Olaf II was king from 1015 to 1028 and was known as “Olaf the Big” (or Olaf the Fat) during his reign. Today he is more commonly referred to as “Olaf the Holy”. After Olaf died he was given the title of Rex Perpetuus Norvegiae, which is Latin for “Norway’s Eternal King”.

16. It’s big in movies : IMAX
The IMAX Corporation, which is behind the IMAX film format, is a Canadian company. The impetus for developing the system came after Expo ’67 in Montreal. Back then large format screenings were accomplished using multiple projectors with multiple screens, with images basically stitched together. The team behind the IMAX technology set out to simplify things, and developed a single-camera, single-projector system.

20. Where the biennial Vinexpo is held : BORDEAUX
Bordeaux is perhaps the wine-production capital of the world. Wine has been produced in the area since the eighth century. Bordeaux has an administrative history too. During WWII, the French government relocated from Paris to the port city of Bordeaux when it became clear that Paris was soon to fall to the Germans. After the German’s took France, the capital was famously moved to Vichy.

The world’s largest wine fair is Vinexpo (“vin” is French for “wine”), and is held annually in Bordeaux, France.

22. China and environs, with “the” : EAST
In geographical terms there are three “easts”. The Near East and Middle East are terms that are often considered synonymous, although “Near East” tends to be used when discussing ancient history and “Middle East” when referring to the present day. The Near/Middle East encompasses most of Western Asia and Egypt. The term “Far East” describes East Asia (including the Russian Far East), Southeast Asia and South Asia.

25. “I merely bought myself a McMansion, and now I’m ___!” : IN THE BIGHOUSE
“McMansion” is a word used for a large, luxury house that many believe is “too much” for the neighborhood. Similar pejorative terms are “garage Mahal” and “Hummer house”.

29. Epic poem segment : CANTO
A canto is a section of a long poem, and is a term first used by the Italian poet Dante. “Canto” is the Italian for “song”.

32. Stop shooting : WRAP
When shooting of a film is concluded the movie is said to “wrap”, and everyone heads to the wrap party. There is one story that “wrap” is actually an acronym for “wind, reel and print”, a reference to the transition of the filming process into post-production. But, this explanation is disputed.

33. Cannes confirmation : OUI
Cannes is a city on the French Riviera, noted as host of the Cannes Film Festival. The idea of the annual film festival was adopted by the city just before WWII. However, the festival had to wait for the end of the war for its launch in 1946.

36. Name on a collectible campaign button : IKE
“I Like Ike” was a political slogan that originated with the grassroots movement to get Dwight D. Eisenhower to run for president in the 1952 presidential election.

37. Dying rebuke : ET TU
It was Shakespeare who popularized the words “Et tu, Brute?” (And you, Brutus?), in his play “Julius Caesar”, although the phrase had been around long before he penned his drama. It’s not known what Julius Caesar actually said in real life just before he was assassinated on the steps of the Senate in Rome.

40. Actor Davis of “Get on the Bus” : OSSIE
Ossie Davis was a very successful African-American actor, but also a director, poet, playwright and social activist. One of Davis’s better known performances was in the 1993 movie “Grumpy Old Men”, in which he played the owner of the bait shop by the lake.

47. The Charleses’ pet : ASTA
Asta is the wonderful little dog in the superb “The Thin Man” series of films starring William Powell and Myrna Loy (as Nick and Nora Charles). In the original story by Dashiell Hammett, Asta was a female Schnauzer, but on screen Asta was played by a wire-haired fox terrier called “Skippy”. Skippy was also the dog in “Bringing up Baby” with Cary Grant and Katharine Hepburn, the one who kept stealing the dinosaur bone. Skippy retired in 1939, so Asta was played by other dogs in the remainder of “The Thin Man” films.

48. Brother of Prometheus : ATLAS
In Greek mythology, Atlas was a Titan who was tasked with holding up the celestial sphere on his shoulders. The Greeks observed the planets moving and the stars in fixed positions. They believed that the stars were on the surface of a single starry sphere, the celestial sphere that was supported by Atlas.

In Greek mythology, Prometheus was one of the Titans. He was said to have created man from clay as well as giving fire to humanity, allowing the human race to prosper.

54. Pen knife? : SHIV
“Shiv” is a slang term for a weapon crudely fashioned to resemble a knife. Mostly we hear of shivs that have been fashioned by prison inmates to do harm to others.

55. “I merely paddled my canoe against a current, and now I’m ___!” : UP THE RIVER
Sing Sing is the nickname of the famous prison in Ossining, not far from New York City and “up the river” Hudson.

Down
1. Kind of salad : COBB
Ty Cobb’s first cousin, Robert H. Cobb, owned the Brown Derby chain of restaurants. One of his regular customers was the famous Sid Grauman, who ran Grauman’s Chinese Theater. Late one night, Grauman asked for a snack, and Cobb came up with a chopped salad simply made from ingredients he happened to have in the refrigerator. Grauman liked it so much that continued to request it, and the Cobb salad was born.

2. Fleischmann’s offering : OLEO
Emperor Louis Napoleon III of France announced a competition to develop a substitute for butter, a substitute that would be more accessible to the lower classes and more practical for the armed forces. A French chemist called Hippolyte Mege-Mouries came up with something he called oleomargarine in 1869, which was eventually manufactured under the trade name “margarine”. The name “oleomargarine” also gives us our generic term “oleo”.

3. Bert of “The Wizard of Oz” : LAHR
Bert Lahr’s most famous role was the cowardly lion in “The Wizard of Oz”. Lahr had a long career in burlesque, vaudeville and on Broadway. Lahr also starred in the first US production of Samuel Beckett’s play “Waiting for Godot”, alongside Tom Ewell.

5. Linear punctuation mark : EM DASH
In typography, there are em dashes and en dashes. The em dash is about the width of an “m” character, and an en dash about half that, the width of an “n’ character. An en dash is used, for example, to separate numbers designating a range, as in 5-10 years. Th em dash seems to be going out of style, and indeed the application I am using to write this paragraph won’t let me show you one!

6. Film director Neil : LABUTE
Neil LaBute is a film director and playwright from Detroit. LaBute often collaborates with actor Aaron Eckhart, with Eckhart appearing in many of his films. LaBute and Eckhart met as student at Brigham Young University.

7. Sophocles play set during the Trojan War : AJAX
Sophocles was one of three ancient Greek tragedians whose work has survived. The first of these was Aeschylus, the second Sophocles, and the third Euripides. Sophocles is believed to have written 123 plays, the most famous of which are “Antigone” and “Oedipus the King”.

24. Miracle Mets player Tommie : AGEE
Tommie Agee was a Major League Baseball player who played mainly with the Indians, White Sox and Mets. He was one of the “Amazin’ Mets”, and was famous for making two phenomenal catches in game three of the 1969 world series, potentially saving five runs.

27. H. H. Munro’s pen name : SAKI
Hector Hugh Munro was a British writer, actually born in Burma. Munro was famous for his short stories, which he published using the pen name “Saki”. His most well-known story is “The Open Window”, which ends with the great line “Romance at short notice was her specialty”.

34. Aunt in the “Judy Moody” book series : OPAL
Judy Moody is a young girl in third grade who is the main character in a series of children’s books by Megan Jo McDonald. Judy has a younger brother nicknamed “Stink”, who has merited a spin-off series of his own.

40. Web-footed creature : OTTER
The fur of the sea otter is exceptionally thick. It is in fact the densest fur in the whole animal kingdom.

45. Aromatic compounds in wine : ESTERS
Esters are very common chemicals. The smaller, low-molecular weight esters are usually pleasant smelling and are often found in perfumes. At the other end of the scale, the higher-molecular weight nitroglycerin is a nitrate ester and is very explosive, and polyester is a huge molecule and is a type of plastic. Fats and oils found in nature are fatty acid esters of glycerol.

49. Red-bearded god : THOR
In Norse mythology, Thor was the son of Odin. Thor wielded a mighty hammer and was the god of thunder, lightning and storms. Our contemporary word “Thursday” comes from “Thor’s Day”.

50. Magazine founder Eric : UTNE
The “Utne Reader” is known for aggregation and republishing of articles on politics, culture and the environment from other sources in the media. The “Utne Reader” was founded in 1984, with “Utne” being the family name of the couple that started the publication.

51. Novelist Turgenev : IVAN
Ivan Turgenev was a Russian novelist and playwright. Turgenev’s most famous works are a collection of short stories called “A Sportsman’s Sketches” (1852) and the novel “Fathers and Sons” (1862).

52. Singer of “99 Luftballons” : NENA
Nena is a German singer (“Nena” became the name of her band as well) who had a big hit with one of my favorite songs of the eighties “99 Luftballons”. The English translation of the German title (“99 Red Balloons”) isn’t literal, with the color “red” added just so that the title had the right number of syllables for the tune. “Luftballon” is the name given to a child’s toy balloon in German.