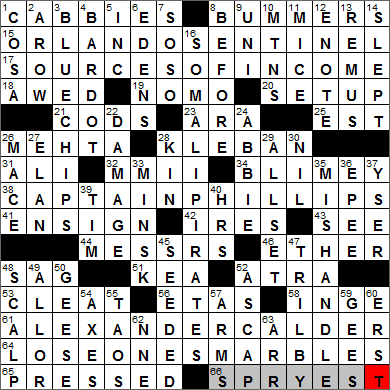 Today’s Wiki-est, Amazonian Googlies
Across
15. Central Florida daily : ORLANDO SENTINEL
Orlando in Central Florida is the largest inland city in the state. Orlando was the most visited city in the US in 2009, mainly as the city and environs has many theme parks including Walt Disney World, Universal Studios Florida and SeaWorld.

19. Major-leaguer from Osaka who threw two no-hitters : NOMO
Hideo Nomo is a former professional baseball pitcher from Osaka, Japan. After achieving success in Japan, Nomo became the first Japanese-born player to appear in Major League Baseball in the US. Nomo threw two no-hitters while playing here in the Majors. He is the only Japanese-born player to have thrown even one no-hitter.

21. Haddock relatives : CODS
In the British Isles, the most common fish that is used in traditional “fish and chips” is Atlantic cod. Cod has been overfished all over the world, and is now considered to be an endangered species by many international bodies.

23. Constellation described by Ptolemy : ARA
The constellation of Ara takes its name from the Latin word for “altar”.

26. Conductor with a star on the Hollywood Walk of Fame : MEHTA
Zubin Mehta is an Indian conductor of western classical music, from Mumbai. Mehta studied music in Vienna, where he made his conducting debut in 1958. In 1961 he was named assistant director of the Los Angeles Philharmonic, creating a fuss with the music director designate of the orchestra, Georg Solti. Solti resigned as a protest, and Mehta took his job. In 1978 Mehta took over as Music Director and Principal Conductor of the New York Philharmonic, eventually becoming the longest holder of that position.

28. “A Chorus Line” lyricist Ed : KLEBAN
Ed Kleban was a composer and lyricist who is best remembered for the Broadway hit “A Chorus Line”, which was a collaboration with Marvin Hamlisch.

“A Chorus Line” is a phenomenal hit musical first staged in 1975. The original Broadway production ran for well over 6,000 performances, making it the longest running production in Broadway history up to that time, a record held for over 20 years (until “Cats” came along).

31. Iran’s Ayatollah ___ Khamenei : ALI
Ali Khamenei has been the Supreme Leader of Iran since 1989.

34. Brit’s cry of surprise : BLIMEY!
When I was a kid in London, a pretty common expression of surprise was “gor blimey”, a euphemism for “God blind me”.

38. See 16-Down : CAPTAIN PHILLIPS
I’ve seen so many films recently that are “based on real events”, and one always has to ask, how much liberty have the screenwriter and director taken with the truth. I saw “Captain Phillips” when it first came out, and then read a “New York Times” article that basically called the whole thing fiction, a rewriting of history. But, it is still a very engaging film …

44. Old letter opener: Abbr. : MESSRS
The abbreviation “Messrs.” is used at the head of a list of male names, in place of “Misters”. It is an abbreviation of the French “messieurs”, the plural of “monsieur”.

48. Org. of which Tom Hanks is a member : SAG
The Screen Actor’s Guild (SAG) is a labor union with over 200,000 members. SAG was formed back in 1933, at a time when Hollywood stars were really being exploited by the big movie studios, especially the younger and less experienced performers. Early supporters of the Guild included famous names like Humphrey Bogart and James Cagney (you could imagine them in a negotiation!). Past presidents of SAG have also been big names, such as Eddie Cantor, James Cagney, Ronald Reagan, Howard Keel, Charlton Heston, Ed Asner and Melissa Gilbert.

51. Mauna ___ : KEA
Mauna Kea is a dormant volcano on the Big Island of Hawaii, the peak of which is the highest point in the whole state. Mauna Kea is in effect the tip of a gigantic volcano rising up from the seabed.

52. Shaving brand : ATRA
Fortunately for crossword setters, the Atra razor was introduced by Gillette in 1977. The Atra was sold as the Contour in some markets and its derivative products are still around today.

58. Writer William : INGE
Playwright William Inge had a run of success on Broadway in the early fifties. Inge’s most celebrated work of that time was the play “Picnic”, for which he was awarded a Pulitzer Prize. The original 1953 cast of “Picnic” included a young male actor making his debut on Broadway. His name was Paul Newman. Many of Inge’s works are set in the American heartland and so he became known as the “Playwright of the Midwest”.

61. Mobile creator : ALEXANDER CALDER
Alexander Calder was an American sculptor and artist. Calder is famous for having invented the mobile sculpture, a work made up of several pieces hanging on a string in equilibrium. In effect they are what we might known as “mobiles”, operating on the same principle as mobiles that sit over cribs in a nursery.

Down
1. ___ Nostra : COSA
Apparently “Cosa Nostra” is the real name for the Italian Mafia. “Cosa Nostra” translates as “our thing” or “this thing of ours”. The term first became public in the US when the FBI managed to turn some members of the American Mafia. The Italian authorities established that “Cosa Nostra” was also used in Sicily when they penetrated the Sicilian Mafia in the 1980s. The term “mafia” seems to be just a literary invention that has become popular with the public.

3. Relatively low-risk investments : BLUE CHIPS
A blue chip is stock in a company that has a reputation for providing a solid return of investment in good times and in bad. The term “blue chip” comes from poker, as blue poker chips are traditionally those with the highest value.

4. Actress for whom a neckline is named : BARDOT
Brigitte Bardot is a former model and actress, as well as a noted animal rights activist. Perhaps her best known screen performance is in the 1956 French film “And God Created Woman” that was directed by her then husband, Roger Vadim.

A Bardot neckline is wide open, exposing both shoulders. The style is named for the actress Brigitte Bardot who popularized it.

5. ___ 500 : INC
“Inc.” is a business magazine that specializes in articles about growing companies. “Inc.” publishes a list of the 500 fastest-growing private companies in the country each year, calling it the “Inc. 500”. The “Inc 5000” is an expanded list also published by the magazine.

8. First of two pictures : BEFORE
Before and after pictures …

13. Fictional teller of tales : REMUS
Uncle Remus is the fictional narrator who was chosen by Joel Chandler Harris to tell his collection of African American folktales.

24. First name in ’60s radicalism : ABBIE
Abbie Hoffman was the founder of the “Yippies”, an activist group that had violent clashes with the police during the 1968 Democratic National Convention in Chicago.

27. Flourish : ELAN
Our word “élan” was imported from French, in which language the word has a similar meaning to ours i.e “style” or “flair”.

33. Eastern European capital of 2 million : MINSK
Minsk is the capital of Belarus, formerly known as the Belorussian Soviet Socialist Republic. One of Minsk’s more infamous residents was Lee Harvey Oswald who lived there from 1960 to 1962.

36. Sport with automated scoring : EPEE
The French word for sword is “épée”. In competitive fencing the épée is connected to a system that records an electrical signal when legal contact is made on an opponent’s body.

37. River of W.W. I : YSER
The Yser originates in northern France and flows through Belgium into the North Sea. The Yser is often associated with WWI as it figured in a major battle early in the conflict. In the first three months of the war, the German Army pushed almost completely through Belgium, inflicting heavy losses on the Belgian Army as the defenders were forced to fight a fast-moving rearguard action. The Germans were intent on pushing right through Belgium and across France in a “race to the sea”. But the Belgians, with the help of their Allies, decided to make a final stand at the Yser Canal in an effort to prevent the Germans reaching the French ports of Calais and Dunkirk. The 22-mile long defensive line was chosen at the Yser because the river and canal system could be flooded to create a barrier that might be defended. The plan was successful and the front was “stabilized”. As we now know, millions of lives were lost over the coming years with very little movement of that battle line.

39. Dickens boy : TIM
Tiny Tim is the nickname of Timothy Cratchit, the little disabled boy in the Charles Dickens novella “A Christmas Carol”. “A Christmas Carol” is such a popular book that it has never been out of print since its first publication in December 1843.

47. English hat similar to a fedora : TRILBY
The hat called a trilby is a fedora with a narrow brim. This style of hat was worn in a stage adaptation of Daphne du Maurier’s novel “Trilby” that was performed in London in the early 1900s. The hat became popular in the UK around the same time, and took its name from the play.

55. Western setting for artisans : TAOS
The city of Taos, New Mexico is named for the Native American village nearby called Taos Pueblo. Taos is famous for its art colony. Artists began to settle in Taos in 1899, and the Taos Society of Artists was founded in 1915.

59. Bee ___ : GEES
The Brothers Gibb (hence, the name “The Bee Gees”) were born in England but grew up and started their musical careers in Australia. They moved back to Manchester in the north of England as youths, and there hit the big time.