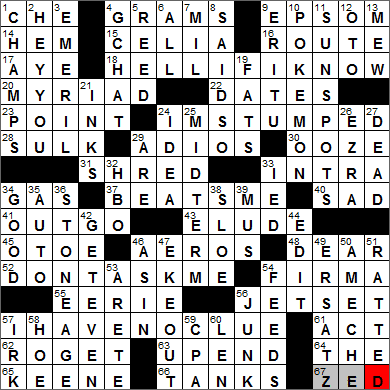 CROSSWORD SETTER: Evan Birnholz
THEME: I Have No Clue … We “have no clue” for each of the themed answers, which all mean I HAVE NO CLUE:

Today’s Wiki-est, Amazonian Googlies
Across
1. Beret-sporting rebel, familiarly : CHE
Ernesto “Che” Guevara was born in Argentina, and in 1948 he started to study medicine at the University of Buenos Aires. While at school he satisfied his need to “see the world” by taking two long journeys around South America, the story of which are told in Guevara’s memoir later published as “The Motorcycle Diaries”. While travelling, Guevara was moved by the plight of the people he saw and their working conditions and what he viewed as capitalistic exploitation. In Mexico City he met brothers Raul and Fidel Castro and was persuaded to join their cause, the overthrow of the US-backed government in Cuba. He rose to second-in-command among the Cuban insurgents, and when Castro came to power Guevara was influential in repelling the Bay of Pigs Invasion and bringing Soviet nuclear missiles to the island. Guevara left Cuba in 1965 to continue his work as a revolutionary. He was captured by Bolivian forces in 1967, and was executed. Fidel Castro led the public mourning of Guevara’s death, and soon the revolutionary was an icon for many left-wing movements around the world.

9. Town with an eponymous derby : EPSOM
The Surrey town of Epsom in England is most famous for its racecourse (Epsom Downs), at which is run the Epsom Derby every year, one of the three races that make up the English Triple Crown. You might also have heard of Epsom salt. Epsom salt is magnesium sulfate, originally prepared by boiling down mineral waters. Epsom was indeed a spa town at one time.

15. Cuban salsa singer Cruz : CELIA
Celia Cruz was born and bred in Cuba, but spent most of her working life in the United States, playing out her salsa singing career in New Jersey. Around the world she was known as the “Queen of Salsa”.

29. “Ciao, amigo!” : ADIOS!
The term “adios” is of course Spanish for “goodbye”. In the Spanish language, “adios” comes from the phrase “a dios vos acomiendo” meaning “I commend you to God”.

30. Move like the Blob : OOZE
The 1958 horror film “The Blob” was the first movie in which Steve McQueen had a leading role. “The Blob” wasn’t a success at all, until Steve McQueen became a star that is. Using McQueen’s name, the movie was re-released and gained a cult following and was particularly successful at drive-in theaters.

33. Prefix with mural : INTRA-
Intramural sports are conducted within a certain geographic area, as opposed to varsity sports which are played with teams outside that area. The term “intramural” comes from the Latin for “within walls” and first applied to events held between teams based within the walls of a city.

45. Siouan tribesman : OTOE
The Otoe (also Oto) Native American tribe originated in the Great Lakes region as part of the Winnebago or Siouan tribes. The group that would become the Otoe broke away from the Winnebago and migrated southwestwards ending up in the Great Plains. In the plains the Otoe adopted a semi-nomadic lifestyle dependent on the horse, with the American bison becoming central to their diet.

55. Like “Goosebumps” tales : EERIE
“Goosebumps” is a series of children’s horror novels written by author R. L. Stine. The novels have been adapted into a television series shown on Canadian TV.

The author R. L. Stine is sometimes referred to as the Stephen King of children’s literature as he writes horror stories for young people.

62. Reference work next to Bartlett’s, maybe : ROGET
Peter Mark Roget was an English lexicographer. Roget was an avid maker of lists, apparently using the routine of list-making to combat depression, a condition he endured for most of his life. He published his famous thesaurus in 1852, with revisions and expansions being made years later by his son, and then in turn by his grandson.

“Bartlett’s Familiar Quotations” is a popular reference work containing tons of quotations. Bartlett’s was first issued in 1855, and as such is the longest-lived collection of quotations that we have available to us. The book started as a private list of quotes gathered by John Bartlett who ran the University Bookstore in Cambridge, Massachusetts. He kept the list as he was always being asked “who said?” by customers.

65. Nancy Drew creator Carolyn : KEENE
The “Nancy Drew” mystery stories were produced by the Stratemeyer Syndicate. The founder of the Syndicate hired a team of writers to produce the “Nancy Drew” novels, but listed the author of each book as the fictional Carolyn Keene.

67. Last letter in “Boz” : ZED
The letter named “zed” has been around since about 1400, and derives from the Greek letter zeta. The spelling and pronunciation of “zee” used in America today first popped up in the 1670s.

The English author Charles Dickens used the pen-name “Boz” early in his career. He had already established himself as the most famous novelist of the Victorian Era when he came to visit America in 1842. He was honored by 3,000 of New York’s elite at a “Boz Ball” in the Park Theater.

Down
3. “Kick it up a notch” TV chef : EMERIL
Emeril Lagasse is an American chef, born in Massachusetts. Lagasse first achieved notoriety as executive chef in Commander’s Palace in New Orleans. Now famous for his television shows, his cuisine still showcases New Orleans ingredients and influences. Lagasse started using his famous “Bam!” catchphrase in order to keep his crew awake during repeated tapings of his show.

4. Popular instant-messaging app : GCHAT
“Gchat” is a common name for the Google Talk instant messaging service. Google Talk offers both text and voice communication as well as a plugin that allows video chat. All of this works seamlessly with Gmail, my personal favorite email client.

5. One of two in an English horn : REED
The English Horn is also known by its French name “Cor Anglais”, and is a double-reed woodwind instrument.

6. What a gimel means on a dreidel : ALL
A dreidel is a spinning top with four sides, often associated with the Jewish holiday of Hanukkah. Each of the four sides on a dreidel bears a letter from the Hebrew alphabet (nun, gimel, hei and shin). The four letters form an acronym for the Hebrew phrase “Nes Gadol Hayah Sham” meaning “a great miracle happened there”. According to tradition, children would be taught Torah while hiding in caves away from the Greeks. When Greek soldiers approached, the children would hide their torah scrolls and play with their dreidels instead.

In the traditional game played with a dreidel, if the letter “gimel” faces up after a spin then that player takes “all” the game pieces in the pot.

9. Aria title that means “It was you” : ERI TU
The aria “Eri tu” is from Verdi’s opera “Un ballo in maschera” (A Masked Ball). The opera tells the story of the assassination of King Gustav III of Sweden during a masked ball.

10. Late 1990s fad : POKEMON
“Pokémon” is the second-biggest video game franchise in the world, second only to the “Mario” franchise. “Pokémon” is a contraction of “Pocket Monsters”.

11. They have umbras and penumbras : SUNSPOTS
Sunspots are temporary dark spots seen on our sun, the sites of intense magnetic activity accompanying a drop in surface temperature (hence the darkening in color).

13. Sound from an Abyssinian : MEW
The Abyssinian is a popular short-haired breed of domestic cat. The name “Abyssinian” would seem to indicate that the breed originated in Ethiopia (formerly “Abyssinia”), but most stories suggest that the Abyssinian comes from Egypt.

19. Domino often played? : FATS
Antoine “Fats” Domino was born and raised in New Orleans, with Creole as his first language. He made into the big time in 1949 when he recorded an early rock and roll record called “The Fat Man”. That record sold over a million copies, the first rock and roll record to achieve that milestone.

26. Cornell of Cornell University : EZRA
Ezra Cornell was an associate of Samuel Morse and made his money in the telegraph business. After Ezra retired he co-founded Cornell University in Ithaca, New York. He provided a generous endowment and donated his farm as a site for the school, and was then rewarded by having the institute named after him.

29. Word often abbreviated to its middle letter, in texts : ARE
How R U? (how are you?)

33. Roadside bomb, briefly : IED
Sadly, having spent much of my life in the border areas between southern and Northern Ireland, I am all too familiar with the devastating effects of Improvised Explosive Devices (IEDs). One has to admire the bravery of soldiers who spend their careers defusing (or attempting to defuse) such devices in order to save the lives and property of others. Of course these days, IEDs are very much in the news in Iraq and Afghanistan.

36. Fred and Barney’s time : STONE AGE
I once had the privilege of spending an afternoon in the room (Bill Hanna’s den) where Bill Hanna and Joe Barbera came up with the idea of “The Flintstones” …

38. Plum relative : SLOE
The sloe is the fruit of the blackthorn bush.

47. Barely make : EKE OUT
To “eke out” means to “make something go further or last longer”. For example, you could eke out your income by cutting back on expenses. I always have a problem with the commonly cited definition of “eke out” as “barely get by”. Close but no cigar, I say …

49. Like Splenda vis-à-vis sugar : ERSATZ
Something described as “ersatz” is a copy, and usually not a good one. “Ersatz” comes from the German verb “ersetzen” meaning “to replace”.

Splenda and Equal are brand names for the artificial sweetener sucralose.

50. Don of “Trading Places” : AMECHE
Don Ameche was such a gentleman. He starred in the fun movie “Trading Places” in 1983, and was required to use the “f-word” in the script. According to co-star Jamie Lee Curtis, Ameche went around the set before the scene was shot, and apologized in advance to everyone for having to use bad language.

53. Glacial ridge : ARETE
An arete is ridge of rock defining the border between two parallel valleys that have been formed by glaciation. If the ridge between the valleys is rounded, it is called a “col”. However if it is “sharpened”, with rock falling way due to successive freezing and thawing, then it is called an “arete”. “Arête“ is the French word for “fish bone”.

59. Pro that may be replaced by TurboTax : CPA
Certified public accountant (CPA)