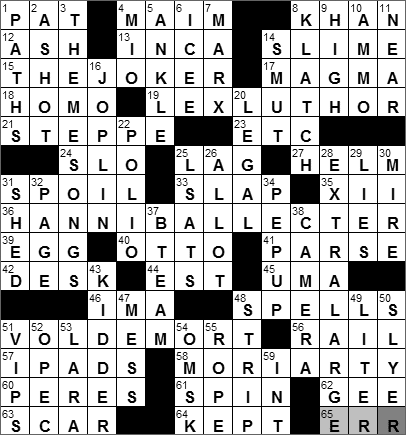 CROSSWORD SETTER: Ian Livengood
THEME: Villains … all of the theme answers are bad guys in the world of entertainment:

8. “Star Trek” villain : KHAN
In the 1982 movie “Star Trek II: The Wrath of Khan” William Shatner of course played James T. Kirk, and the evil Khan was played by Ricardo Montalbán. Leonard Nimoy didn’t want to appear in the sequel, and only agreed to do so when the producers agreed to “kill off” Spock at the end of the story (but he comes back … and back … and back …).

13. Ancient Peruvian : INCA
The Inca people emerged as a tribe around the 12th century, in what today is southern Peru. The Incas developed a vast empire over the next 300 years, extending along most of the western side of South America. The Empire of course fell to the Spanish, finally dissolving in 1572 with the execution of Tupac Amaru, the last Incan Emperor.

15. “Batman” villain : THE JOKER
The Joker is one of the most colorful of Batman’s nemeses, introduced into the comic books in 1940, appearing in the first ever edition of “Batman”. He has been played on screen by some colorful characters. In the original television series he was portrayed by Cesar Romero, and on the big screen by Jack Nicholson. What great casting!

18. ___ sapiens : HOMO
The Homo genus includes, of course, the species Homo sapiens (modern humans), but we’re the only species left in that genus. The last known species related to humans was Homo neanderthalensis (Neanderthal Man) which died off about 24,000 years ago. However, another species was discovered in Indonesia in 2003 that has been dubbed Homo floresiensis (Flores Man … sometimes called “hobbit”), and it may possibly have lived as recently as 12,000 years ago. Watch this space …

19. “Superman” villain : LEX LUTHOR
Lex Luthor is the arch-nemesis of Superman in comics. Luthor has been portrayed in a number of guises in the comic world as well in movies and on the small screen. For example, he appeared as Atom Man in the 1950 film series “Atom Man vs. Superman”, and was played by actor Lyle Talbot, opposite Kirk Alyn’s Superman.

21. Siberian plain : STEPPE
A steppe is a grassland, devoid of trees apart from those growing near rivers and lakes. In this country we would likely call such a geographic feature a prairie.

33. Action to a newborn baby’s bottom : SLAP
Apparently the practice of lightly slapping a newborn baby on the bottom is dying out. The intent was to get the baby to cry, helping clear residual amniotic fluid out of the baby’s lungs and airway. Nowadays a baby is rubbed down with a towel and fluid gently suctioned away if necessary. I’ve only seen this twice, and have no plans for any repeat performances …

40. Germany’s ___ von Bismarck : OTTO
Germany first became a country of its own in 1871, when the Princes of the various independent German states met at Versailles outside Paris to proclaim Wilhelm of Prussia as the Emperor of the German Empire. The man behind this historic development was Wilhelm’s Ministerpräsident, Otto von Bismarck. Von Bismarck was a powerful figure in Prussia, and indeed on the world stage, earning him the nickname of the “Iron Chancellor”.

45. Thurman of Hollywood : UMA
Uma Thurman’s father, Robert Thurman, was the first westerner to be ordained a Tibetan Buddhist monk. He raised his children in the Tibetan Buddhist tradition, and called his daughter Uma as it is a phonetic spelling of the Buddhist name, Dbuma.

46. John Denver’s “Thank God ___ Country Boy” : I’M A
Singer John Denver’s real name was Henry John Deutchendorf, Jr. Denver was a great singer, and he had many other passions. He was an excellent photographer, and an avid skier and golfer. He also loved flying and collected vintage biplanes. He flew himself to concerts in his own Learjet, and had a handful of other planes that he would take out for spin when he could. One of his planes was an Experimental Rutan Long-EZ, a homebuilt aircraft noted for its fuel efficiency and tremendous range. Denver took the Rutan Long-EZ up in the middle of October, 1997, not having much experience with the plane, even though he had logged over 2,700 hours of flying time in other aircraft. The plane crashed into the ocean near Pacific Grove, California in an accident that Denver did not survive.

51. Harry Potter villain : VOLDEMORT
Voldemort is the main “bad guy” in the “Harry Potter” series of books. I heard J. K. Rowling, the author of the books, on the radio the other day and she tells us that “Voldemort” is supposed to be pronounced with a silent “t” on the end, so it sounds kind of French. But, when the movies came out, the actors went with the hard “t”, and that’s the pronunciation that seems to prevail now.

57. Apple tablet computers : IPADS
The very exciting iPad isn’t Apple’s first foray into the world of tablet computing by any means. Apple created great buzz by introducing the Newton MessagePad way back in 1993. This innovative machine was fraught with problems and really died a very slow death, finally being withdrawn from the market in 1998.

58. Sherlock Holmes villain : MORIARTY
Professor James Moriarty was the main villain that locked swords with Sir Arthur Conan Doyles’ “Sherlock Holmes” character. Moriarty is always cropping up in Sherlock Homes television and radio plays, and in movies, but if you go back to the original stories, he isn’t around very much. He only turns up directly in two of the narratives, and was primarily introduced by Conan Doyle in order to “kill off” Sherlock Holmes in a brawl at the top of the Reichenbach Falls in Germany. Both Holmes and Moriarty fell to their deaths. Well … public pressure on the author caused Conan Doyle to resurrect Holmes in “The Hound of the Baskervilles”.

61. Roulette action : SPIN
The name “roulette” means “little wheel” in French, and the game as we know it today did in fact originate in Paris, in 1796.

63. “The Lion King” villain : SCAR
Among the group of lions at the center of “The Lion King” story, young Simba is the heir apparent, the lion cub destined to take over as leader of the pride. His uncle is jealous of Simba, and plots with a trio of hyenas to kill Simba, so that he can take his position. The uncle was originally named Taka (according to books) but he was given the name Scar after being injured by a buffalo.

3. “I’ll Be There for You” for “Friends,” and others : THEME SONGS
The producers of TV’s hit sitcom “Friends”, David Crane and Marta Kauffman, actually co-wrote the show’s theme song. The theme was originally just a minute long, and recorded by the Rembrandts. A Nashville radio announcer looped the one-minute song into a standard 3-minute pop song format and it became really popular over the airwaves. The Rembrandts found themselves “having to” come up with a re-write and recorded a full, 3-minute version of the song in 1995, released it on an album and making a music video. The video features all six of the “Friends” stars, and pieces of the video appear in the opening sequence of the later shows.

4. “O Sole ___” : MIO
“‘O sole mio” is a famous Italian song from Naples, written in 1898. The lyrics are usually sung in the original Neapolitan, as opposed to Italian. The title translates from Neapolitan into “My Sun” (and not into “O, My Sun” as one might expect). It’s a love song of course, sung by a young man declaring that there is a sun brighter than that in the sky, the sun that is his lover’s face. Awww …

7. Karl with a manifesto : MARX
Karl Marx was a German philosopher and revolutionary who helped develop the principles of modern communism and socialism. Marx argued that feudal society created internal strife due to class inequalities which led to its destruction and replacement by capitalism. He further argued that the inequalities created in a capitalist society create tensions that will also lead to its self-destruction. His thesis was that the inevitable replacement of capitalism was a classless (and stateless) society, which he called pure communism.

8. Social gathering with coffee : KLATCH
A “klatch” (also “klatsch”) is a casual gathering, particularly for conversation. “Klatch” comes from the German “klatschen” meaning “to gossip”.

20. 8 1/2″ x 14″ paper size : LEGAL
Like so many things, our paper sizes here in North America don’t conform with the standards in the rest of the world. ISO standard sizes used elsewhere have some logic behind them, in that the ratio of width to length is usually one to the square root of two. This mathematical relationship means that when you cut a piece of paper in half, it preserves the same aspect ratio, which can be useful in making reduced or enlarged copies of documents. Our standard sizes of “letter” (8.5 x 11 inches) was determined in 1980 by the Reagan administration to be the official paper size for the US government. Prior to this, the “legal” size (8.5 x 14 inches) had been set in 1921 as the standard.

22. Salk vaccine target : POLIO
Jonas Salk was an American medical researcher, famous for developing the first safe polio vaccine. In the fifties, especially after the 1952 polio epidemic, the biggest health fear in the US was polio, because it killed thousands, left even more with disabilities and most of the victims were children. The situation was dire and the authorities immediately quarantined the family of any polio victim, and that quarantine was so strict that in many cases the families were not even permitted to attend the funeral of a family member who died from the disease.

28. Jumbo : EXTRA LARGE
James Anthony Bailey collaborated with P. T. Barnum to establish Barnum and Bailey’s Circus. It was Bailey who negotiated the deal to buy a famous elephant from London Zoo in 1882, the one called “Jumbo”. The exposure that Jumbo got in the circus led to the common usage of our contemporary term “jumbo” meaning “huge”.

38. Nikon product : CAMERA
Nikon was founded in 1917, a merger of three companies making various optical devices. After the merger, the company’s main output was lenses (including the first lenses for Canon cameras, before Canon made their own). During the war, Nikon sales grew rapidly as they focused on (pun unintended!) equipment for the military including periscopes and bomb sights.

52. Intl. oil group : OPEC
The OPEC cartel (the Organization of the Petroleum Exporting Countries) was formally established in 1960 and has been headquartered in Vienna since 1965. The US is actually the third largest oil producer in the world (after Russia and Saudi Arabia), but isn’t part of OPEC. One reason America isn’t a member is that even though we are a big producer we import a lot more than we export. But you probably knew that already …

53. “___ Croft: Tomb Raider” : LARA
Lara Croft was first introduced to the world as the main character in a pretty cool video game (I thought) called “Tomb Raider”, back in 1996. Lara Croft then moved to the big screen in 2001 and 2003, in two pretty awful movie adaptations of the game’s storyline. Angelina Jolie played Croft, and did a very energetic job.

54. Siberian city : OMSK
Omsk is a city in southwest Siberia. It is located over 1400 miles from Moscow, and was chosen as the destination for many internal exiles in the mid-1900s. Perhaps the most famous of these exiles was the author Fyodor Dostoyevsky.