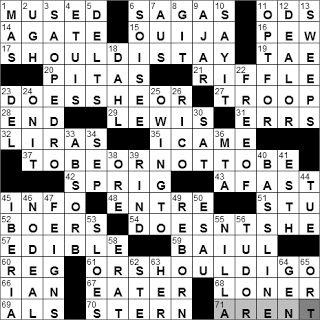 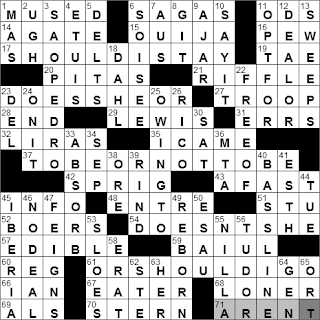 
Today’s Wiki-est, Amazonian Googlies
Across
14. Playing marble : AGATE
A playing marble made from agate is called just that, an agate. Steelies on the other hand, are made from solid steel.

15. Kind of board for a séance : OUIJA
The Ouija board was introduced to America as a harmless parlor game at the end of the 19th century, although variations of the board date back to 1100 BC in China, where it was apparently used to “contact” the spirit world. The name “Ouija” is relatively recent, and is probably just a combination of the French and German words for “yes” … “oui” and “ja”.

17. With 61-Across, 1982 question from the Clash : SHOULD I STAY
(61. See 17-Across : OR SHOULD I GO)
The Clash were one of the original punk bands, one that came together in 1976 in London. Despite their popularity, the Clash only ever had one number one single, “Should I Stay or Should I Go”. Even though the song was first released in 1982, it didn’t make it to the top of the charts until 1991 when it was re-released.

19. ___ Bo (exercise system) : TAE
Tae Bo isn’t an ancient martial art, but was developed as a form of aerobic exercise in the 1990s. It was introduced by taekwondo expert Billy Blanks who gave it the name tae bo, a melding of taekwondo and boxing.

20. Breads with pockets : PITAS
Pita is a lovely bread from middle-eastern and Mediterranean cuisines. It is usually round, and has a “pocket” in the center. The pocket is created by steam that puffs up the dough during cooking, leaving a void when the bread cools. The pockets were a big hit in the seventies when someone  came on the idea of using them for fillings and creating pita sandwiches or “pita pockets”.

23. With 54-Across, old advertising question from Clairol : DOES SHE OR
(54. See 23-Across : DOESN’T SHE)
“Does she…or doesn’t she? Only her hairdresser knows for sure” was the catchphrase for Miss Clairol Hair Color Bath. Clairol had been around since 1931 selling hair-coloring products to salons, and then hit the big time with the introduction of a one-step, hair-coloring product for use at home. Equally as famous as the product was the “does she … doesn’t she” advertising campaign. Six years after the launch of the campaign, 70% of women in the US were coloring their hair.

29. Huey ___ and the News : LEWIS
Huey Lewis and the News are a local band out here in the Bay Area, based in San Francisco. When the movie “Ghostbusters” came out in 1984, the band sued Ray Parker, Jr. who wrote the film’s theme song, claiming that it was very similar to their own song “I Want a New Drug”. The case was settled out of court, and the following year “Huey Lewis and the News” made the most of an opportunity to write a movie theme themselves. Their smash hit “The Power of Love” was written for “Back to the Future”, and propelled the band into stardom.

35. Start of Caesar’s boast : I CAME
The oft-quoted “Veni, vidi, vici” (“I came, I saw, I conquered”) is believed by many to have been written by Julius Caesar. The words date back to 47 BC and refer to the short war between Rome and Pharnaces II of Pontus.

37. Soliloquy question from Hamlet : TO BE OR NOT TO BE

52. Afrikaners : BOERS
Boer is the Dutch and Afrikaans word for “farmer”, a word that was used to describe the Dutch-speaking people who settled parts of South Africa during the 1700s.

59. Oksana ___, 1994 gold-medal skater : BAIUL
Oksana Baiul is a Ukrainian figure skater, the 1994 Olympic champion. She had a rough start to her life as her father deserted her and her mother when she was just two years old, and then her mother died when she was thirteen. Her grandparents had died earlier, so she was left as an orphan, sleeping on a cot in her hometown ice rink.

60. Lower-priced gas option: Abbr. : REG
The difference between a a premium and regular gasoline is its octane rating. The octane rating is measure of the resistance of the gasoline to auto-ignition, it’s resistance to ignition just by virtue of being compressed in the cylinder. This auto-ignition is undesirable, as multiple-cylinder engines are designed so that ignition within each cylinder takes place precisely when the plug sparks, and not before. If ignition occurs before the spark is created, the resulting phenomenon is called “knocking”.

66. Writer Fleming : IAN
Ian Fleming is most famous of course for writing the “James Bond” series of spy novels. You might also know that he wrote the children’s story “Chitty Chitty Bang Bang”, made into a cute movie released in 1968, and even a stage musical that opened in 2002.

69. Capp and Gore : ALS
The cartoonist Al Capp’s real name was Alfred Gerald Caplin. His most famous strip is “Li’l Abner”, but he also wrote “Abbie an’ Slats” and “Long Sam”.

Al Gore was born in Washington DC, the son of course of Al Gore, Sr., then a US Representative for the state of Tennessee. After deferring his military service in order to attend Harvard, Gore became eligible for the draft on graduation. Many of his classmates found ways of avoiding the draft, but he decided to serve, and even took the “tougher” option of joining the army as an enlisted man. Actor Tommy Lee Jones shared a house with Gore in college, and says that his buddy told him that even if he could find a way around the draft someone with less options than him would have to go in his place, and that was just wrong.

Down
3. Heavenly gatekeeper, in Portugal : SAO PEDRO
Sao Pedro is the Portuguese for Saint Peter.

In the Gospel of Matthew, Simon Peter is described as the “keeper of the keys of the kingdom of Heaven”. This quotation has given rise to depictions of Saint Peter in popular culture as someone who sits at the gates of heaven, determining who shall enter and who shall be turned away.

4. Needle and thread holders : ETUIS
An etui is an ornamental case used to hold small items, in particular sewing needles. We imported both the case design and the word “etui”, from French. The French also have a modern usage of “etui” … a case for carrying CDs.

7. Vienna’s land: Abbr. : AUS
Just like Berlin, Vienna was occupied by the four allied powers after WWII. In 1948, West Berlin was famously blockaded by the Soviet Union, leading to the remarkable Berlin Airlift that kept the city open. If the same thing had happened in the Austrian capital, things would have been more complicated, as there was no airport in the western zone of the city.

9. Barely open : AJAR
Our word “ajar” is thought to come from Scottish dialect, in which “a char” means “slightly open”.

12. With 46-Down, question from a 2000s game show : DEAL OR
(46. See 12-Down : NO DEAL)
The game show “Deal or No Deal” started out as a production of the Dutch company Endemol. Now it is aired in slightly different formats all round the world.

18. Roald who created Willy Wonka : DAHL
Roald Dahl’s  name is Norwegian. Dahl’s parents were from Norway, although Dahl himself was Welsh. Dahl became one of the most successful authors of the twentieth century, and a couple of his most famous titles are “James and the Giant Peach” and “Charlie and the Chocolate Factory”.

23. The First State: Abbr. : DEL
The state of Delaware takes its name from Virginia’s first colonial governor, Englishman Thomas West, 3rd Baron De La Warr. Delaware is known as the First State as it was the first to ratify the US Constitution, in 1787.

26. Puerto ___ : RICO
Puerto Rico is located in the northeastern Caribbean, east of the Dominican Republic. The name “Puerto Rico” is Spanish for “rich port”. The locals often call their island Borinquen, the Spanish form of the original name used by the natives, Boriken.

34. Labor Day’s mo. : SEP
Labor Day is a federal holiday observed every year on the first Monday in September. The tradition of honoring workers with a holiday started in Boston in 1878, when a day of observance was organized by the Central Labor Union, the major trade union at the time. There was a bloody dispute in 1894 between labor unions and the railroads called the Pullman Strike, which led to the death of some workers when the US Military and US Marshalls were instructed to maintain order. President Grover Cleveland submitted a “Labor Day” bill to Congress which was signed into law just six days after the end of the strike. The introduction of a federal holiday to honor the worker was a move designed to promote reconciliation between management and unions after the bitter conflict.

36. Big Apple mass transit inits. : MTA
The MTA is the Metropolitan Transportation Authority, which has public transportation responsibility in the state of New York (as well as part of Connecticut).

41. Book before Job: Abbr. : ESTH
Esther is the only book in the Bible which doesn’t mention God.

45. Portugal’s peninsula : IBERIA
The Iberian Peninsula in Europe is of course largely made up of Spain and Portugal. However, also included is the Principality of Andorra in the Pyrenees, a small part of the south of France, and the British Territory of Gibraltar.

50. Isaac’s eldest : ESAU
Esau was the twin brother of Jacob, the founder of the Israelites. When their mother, Rebekah, gave birth to the twins “the first emerged red and hairy all over (Esau), with his heel grasped by the hand of the second to come out (Jacob)”. As Esau was the first born, he was entitled to inherit his father’s wealth (it was his “birthright”). Instead, Esau sold his birthright to Jacob for the price of a “mess of pottage” (a meal of lentils).

53. Tart fruits : SLOES
The sloe is the fruit of the blackthorn bush, and is the flavoring that gives gin its distinctive taste.

55. Nabisco wafer : NILLA
As one might expect, Nilla is a shortened from of “vanilla”. However, you won’t find any vanilla in Nilla cookies or wafers. They always been flavored with vanillin, synthetic vanilla. Is nothing sacred?

56. Henry VIII’s house : TUDOR
The Wars of the Roses was a series of civil wars fought for the throne of England, between the rival Houses of Lancaster and York. Ultimately the Lancastrians emerged victorious after Henry Tudor defeated King Richard III at the Battle of Bosworth Field. Henry was crowned King Henry VII and united the two Houses by marrying his cousin, Elizabeth of York. Henry had a relatively long reign of 23 years that lasted until his death, after which his son succeeded to the throne as Henry VIII, continuing the relatively short-lived Tudor dynasty. He ruled from 1509 until his death in 1547. Henry VIII was the last king of the House of Tudor, as his daughter, Queen Elizabeth I, died without issue.

58. The “E” in Q.E.D. : ERAT
Q.E.D. is used at the end of a mathematical proof or a philosophical argument. The acronym stands for the Latin “quod erat demonstrandum” meaning “that which was to be demonstrated”.

64. ___-X : GEN
The term Generation X originated in the UK, the name of a book by Jane Deverson. Her book detailed the results of her study of British youths in 1964, contrasting their lifestyle to those of previous generations. It was Canadian author Douglas Coupland who was responsible for popularizing the term, with his more successful publication “Generation X: Tales for an Accelerated Culture”. By the latest accepted definition, Gen-Xers were born between 1961 and 1981.