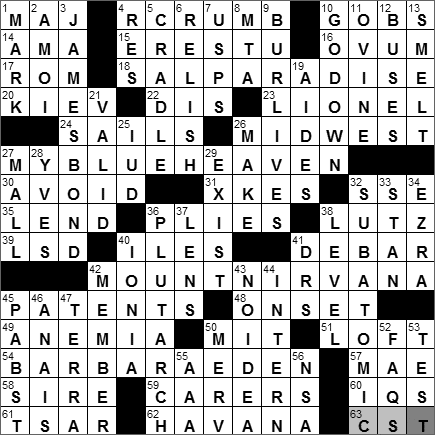 18A. Protagonist in Kerouac’s “On the Road” : SAL PARADISE
27A. 1956 Fats Domino hit : MY BLUE HEAVEN
42A. Highest peak in the Northwest Territories : MOUNT NIRVANA
54A. “I Dream of Jeannie” star : BARBARA EDEN

4. Fritz the Cat’s creator : R CRUMB
“Fritz the Cat” is a comic strip created by Robert Crumb. Fritz is a risqué character, and when he made it to the big screen in 1972 his movie actually earned an X-rating, the first animated feature to be so honored.

14. Org. for 41-Down : AMA
(41. O.R. personnel : DRS)
The American Medical Association was founded in 1847, at the Academy of Natural Sciences in Philadelphia. The first female member was allowed to join in 1868, but the first African American members weren’t admitted until one hundred years later, in 1968.

15. 1974 top 10 hit for Mocedades : ERES TU
We have a big event across Europe every year called the Eurovision Song Contest. Each nation enters one song in competition with each other, and then voters across the whole continent decide on the winner. That’s how ABBA got their big break when they won in 1974 with “Waterloo”. In 1972, Spain’s entry was “Eres tu” (the Spanish for “You Are”) sung by the band Mocedades. It came second in the competition, but should have won in my humble opinion.

17. CD-___ : ROM
CD-ROM stands for “compact disc read only memory”. That means you can read information from the disc (like a standard music CD for example), but you can’t write to it. You can also buy a CD-RW, which stands for “compact disc – rewritable”, with which you can read data and also write over it multiple times using a suitable CD drive.

20. Ukraine’s capital : KIEV
Kiev is the capital city of Ukraine, and a beautiful city from what I’ve heard from friends that have visited.

23. Big name in toy trains : LIONEL
Lionel is the name most associated with toy trains in the US. The first trains rolled off the production line in 1901 and they are still produced today, although the original Lionel Corporation is long gone. In 1995, the brand was bought by an investment company that included train enthusiast Neil Young, the singer, and operated as Lionel, LLC. Neil Young’s financial involvement ended in after a 2008 reorganization of the company following a Chapter 11 bankruptcy filing, but the company is still producing and selling.

31. Classic Jaguars : XKES
Jaguar started out as a manufacturer of sidecars for motorcycles back in 1922, when the company was known as the Swallow Sidecar Company (SS for short). The company changed its name to Jaguar after WWII, because of the unfortunate connotations of the the letters “SS” at that time.

38. Skater’s jump : LUTZ
In figure skating, a Lutz is a toe-pick-assisted jump that one starts skating backwards and ends skating backwards (there’s more to it that I don’t really understand!). The maneuver is named after Alois Lutz, an Austrian skater who first performed it in competition way back in 1913. Lutz wowed the crowd with a single jump, and today both men and women are landing triple Lutz jumps. No one has landed a clean quadruple Lutz in competition.

39. “Dropped” drug : LSD
LSD is short for LySergic acid Diethylamide. A Swiss chemist called Albert Hofmann first synthesized LSD in 1938 in a research project looking for medically efficacious ergot alkaloids. But it wasn’t until some five years later, when Hofmann ingested some of the drug accidentally that he discovered its psychedelic properties. That is so trippy, man …

45. Edison’s 1,000+ : PATENTS
Thomas Alva Edison was nicknamed “The Wizard of Menlo Park” by a newspaper reporter, a name that stuck with him. He was indeed a wizard, in the sense that he was such a prolific inventor, and he was associated with that location as his first research lab was in Menlo Park, New Jersey.

49. Iron deficiency problem : ANEMIA
Anemia is from a Greek word meaning “lack of blood”. It is actually a lack of iron in the blood, or a low red blood cell count. Tiredness is a symptom of the condition.

50. Cambridge sch. : MIT
The Massachusetts Institute of Technology moved into its magnificent mile-long campus on the Cambridge side of the Charles River in 1906. The campus was built largely with funds donated by George Eastman, the founder of the Eastman Kodak Company.

54. “I Dream of Jeannie” star : BARBARA EDEN
Back in 1964, the second most watched show on American television was ABC’s “Bewitched”. Sidney Sheldon was tasked with the job of creating a rival sitcom and he came up with “I Dream of Jeannie”, which first aired in 1965. The censors had a big say in how the story developed. For starters, Jeannie’s skimpy costume was permitted provided Barbara Eden didn’t show off her navel. And Jeannie was only allowed to live with an unmarried man as long as the story made it clear that she slept in a bottle.

60. Mensa members’ stats : IQS
If you ever learned Latin, “mensa” was probably taught to you in lesson one as it’s the word commonly used as an example of a first declension noun. Mensa means “table”. The Mensa organization, for folks with high IQs, was set up in Oxford, England back in 1946. To become a member, you have to have an IQ that is in the top 2% of the population.

3. Aston Martin-driving agent : JAMES BOND
James Bond was given his famous Aston Martin car in “Goldfinger”, both in the movie and in the original book by Ian Fleming.

8. Kingston Trio hit of 1959 : MTA
“M.T.A.” was a 1958 hit for the Kingston Trio. The song tells of a man stuck on board an MTA subway car in Boston. His problem is that “exit fares” had been introduced on the system to supplement “entrance fares” (true story!), and the man didn’t have the extra nickel needed to get off the train.

9. “A Holly Jolly Christmas” singer : BURL IVES
As well as being an actor, Burl Ives was a folk singer, his original calling. In Hollywood he had a distressing experience with the House Unamerican Activities Committee and avoided being blacklisted by cooperating to some level with McCarthy and his team. This cooperation created a rift between him and Pete Seeger in particular, a fellow singer whom he “discussed” with the committee.

12. Greyhounds, e.g. : BUSES
Speaking as someone who lived much of his life outside of the US, I have to say that the Greyhound bus is a celebrated symbol of America, famous from so many old movies. In Ireland the official provincial bus service “stole” the famous logo that gracefully adorns the sides of these buses, and uses an Irish Red Terrier in place of the iconic greyhound.

13. Process, as ore : SMELT
Metals are found in ore in the form of oxides. In order to get pure metal from the ore, it is heated and the oxides reduced (i.e. the oxygen is removed) in the chemical process known as smelting. The oxygen is extracted by adding a source of carbon or carbon monoxide which uses up the excess oxygen atoms to make carbon dioxide, a waste product of smelting.

25. Birth control option, briefly : IUD
It seems that it isn’t fully understood how intrauterine devices (IUDs) work. The design that was most popular for decades was a T-shaped plastic frame on which was wound copper wire. It’s thought that the device is an irritant in the uterus causing the body to release chemicals that are hostile to sperm and eggs. This effect is enhanced by the presence of the copper.

28. Saint Laurent of fashion : YVES
Yves Saint-Laurent was a French fashion designer, actually born in Algeria. He started off working as an assistant to Christian Dior at the age of 17. Dior died just four years later, and as a very young man Saint-Laurent was named head of the House of Dior. However, in 1950 Saint-Laurent was conscripted into the French Army and ended up in a military hospital after suffering a mental breakdown from the hazing inflicted on him by his fellow soldiers. His treatment included electroshock therapy and administration of sedatives and psychoactive drugs. He was released from prison, managed to pull his life back together, and started his own fashion house. Remarkable …

32. Like a quark : SUBATOMIC
The three nuclear particles that we all learned about at school were protons, electrons and neutrons. The “big” particles, the protons and neutrons are known collectively as nucleons. Nucleons aren’t fundamental particles, in the sense that nucleons are made up of three smaller particles called quarks. Protons are made from two “up” quarks and one “down” quark, while neutrons are composed of one “up” quark and two “down” quarks.

33. ___ the Man (Cardinal nickname) : STAN
Stan Musial is a retired baseball player who went by the nickname “Stan the Man”, a moniker he was awarded by the Brooklyn Dodgers fans in 1946. Apparently, off the field Stan is quite the harmonica player.

34. Rock’s Better Than ___ : EZRA
Better Than Ezra is an alternative rock band from New Orleans. The band apparently keeps the origins of its name a secret. The fans of the group call themselves “Ezralites”.

36. “Parallel Lives” author : PLUTARCH
Plutarch was a Greek historian who became a Roman citizen. His most famous work is probably “Parallel Lives”, a series of paired biographies, with each pair comparing the lives of one Greek and one Roman.

40. Aegean Sea region : IONIA
The region called Ionia is located in present day Turkey. Ionia was prominent in the days of Ancient Greece although it wasn’t a unified state, but rather a collection of tribes. The tribal confederacy was more based on religious and cultural similarities rather than a political or military alliance. Nowadays we often refer to this arrangement as the Ionian League.

45. Blue Ribbon brewer : PABST
There appears to be some dispute over whether the Pabst brand of beer ever won a “blue ribbon” prize, but the company claims that it did so at the World’s Columbian Exposition in Chicago in 1893. The beer was originally called Pabst Best Select, and then just Pabst Select. With the renaming to Blue Ribbon, the beer was sold with an actual blue ribbon tied around the neck of the bottle, until it was dropped in 1916 and incorporated into the label.

46. Diarist Nin : ANAIS
Anaïs Nin was a French writer, famous for her journals that she wrote for over sixty years from the age of 11 right up to her death. She also wrote highly regarded erotica, and cited D. H. Lawrence as one author from whom she drew inspiration.

50. First name in old TV talk : MERV
Merv Griffin was quite the entertainer, truly a mogul in the business. He started his career as a singer on the radio during the big band era. In the sixties he hosted his own talk show, and then famously developed such great game shows as “Jeopardy!” and “Wheel of Fortune”.

52. Online help features, briefly : FAQS
FAQs: Frequently Asked Questions, like the ones you can reach by clicking on the link in the top right of this page.

56. Supersecret org. : NSA
The National Security Agency was set up in 1952 by President Truman, a replacement for the Armed Forces Security Agency that had existed in the Department of Defense since 1949. The NSA has always been clouded in secrecy and even the 1952 letter from President Truman that established the agency was kept under wraps from the public for over a generation. I really like the organizations nickname … “No Such Agency”.