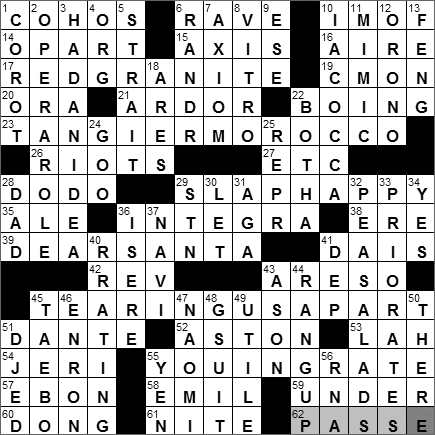 CROSSWORD SETTER: Elizabeth C. Gorski
THEME: INTEGRA … all the theme answers contain a word that is an anagram of INTEGRA:

17A. Wisconsin’s state rock : RED GRANITE
23A. City on the Strait of Gibraltar : TANGIER, MOROCCO
45A. 1987 duet by Eric Clapton and Tina Turner : TEARING US APART
55A. Rebuke to a thankless wretch : YOU INGRATE


Today’s Wiki-est, Amazonian Googlies
Across
1. Pacific salmon : COHOS
The Coho salmon is silver along the side of its body, but only during the phase of its life while it is in the ocean. When spawning, and heading up into a freshwater river, the Coho has bright red sides.

15. Something to reflect on? : AXIS
A mathematical reflection reflects on or around an axis.

17. Wisconsin’s state rock : RED GRANITE
Red granite is an igneous rock. It’s commonly used in memorials and headstones. Red granite was of such importance to the economic prosperity of Wisconsin, it was designated as the “state rock” in 1971. There’s even a village in Wisconsin called Redgranite.

35. McSorley’s order : ALE
A few years ago, I brought my wife and sister-in-law into McSorley’s. I was foolish enough to ask what kind of wine they had for the ladies. the gruff answer was “McSorley’s Light Ale or McSorley’s Dark Ale”.

36. Bygone Acura that’s involved in a crackup at 17-, 23-, 45- and 55-Across? : INTEGRA
Acura is a division of the Honda Motor Company, their luxury brand. As an aside, Infiniti is the equivalent luxury brand for the Nissan Motor Company, and Lexus is the more luxurious version of Toyota’s models.

45. 1987 duet by Eric Clapton and Tina Turner : TEARING US APART
Eric Clapton wrote “Tearing Us Apart”, a song he recorded as a duet with Tina Turner in 1986. The song was very autobiographical, and concerns his break up with his ex-wife Pattie Boyd.

51. “Il Convivio” writer : DANTE
Dante Alighieri was an Italian poet of the Middle Ages. His “Divine Comedy” is widely considered to be the greatest literary work ever written in the Italian language.

52. ___ Martin : ASTON
Aston Martin is a British car manufacturer, founded in 1913 by Lionel Martin. The Aston part of the company name comes from Aston Hill, a famous site for speed hill-climbing cars that is nearby the original factory. Aston Martin cars are much loved by the British entertainment industry. Of course James Bond was given one in “Goldfinger”, and Michael Caine drove one in the 1969 version of “The Italian Job”. Roger Moore’s character drove a yellow Aston Martin in the seventies television show “The Persuaders!”.

54. Actress Ryan of “Boston Public” : JERI
Jeri Ryan’s most famous role is that of the de-assimilated Borg known as Seven of Nine, on “Star Trek: Voyager”. I haven’t seen that show, so I know Ryan from a supporting role on the legal drama “Shark”, playing opposite James Woods. She also plays Ronnie Cooke on “Boston Public”.

57. Ink-colored, in Shakespeare : EBON
Ebony is another word for the color black (often shortened to “ebon” in poetry). Ebony is a dark, black wood that is very dense, and is one of the few types of wood that sinks in water. Ebony has been in high demand, so the species of trees yielding the wood are now considered threatened. It’s in such short supply, that unscrupulous vendors have been known to darken lighter woods with shoe polish to look like ebony, so be warned …

1. “Woman With a Pearl” painter : COROT
Jean-Baptiste-Camille Corot was a French painter mainly noted for his landscapes, working just before the birth of the Impressionist movement. His lovely painting “Woman with a Pearl” from 1868-70 can be seen at the Musée du Louvre in Paris.

2. Tristan or Isolde : OPERA ROLE
“Tristan und Isolde” is an epic opera by Richard Wagner (Wagner … not one of my favorites!). Many see it as the first serious move away from the traditional harmony and tonality of the classical and romantic eras.

4. Modern address ending : ORG
The Internet addresses that end with the letters .org are intended for use by non-profit organizations, but as anyone can register a .org name, there are plenty of commercial concerns that use it … so be careful with whom you’re dealing!

8. In ___ fertilization : VITRO
In vitro fertilization is the process in which egg cells are fertilized by sperm cells outside of the body, “in vitro”, meaning “in glass”, usually in a culture dish.

10. 1984 best-selling business autobiography : IACOCCA
Lee Iacocca was a lot more successful at Chrysler than he was earlier in his career at Ford. He is credited with the turnaround of Chrysler in the eighties, but he is also credited with the failure of the Ford Pinto, and didn’t get on well with Henry Ford II so was fired.

13. ___ shui : FENG
Feng shui is the ancient Chinese tradition of arranging objects, buildings and other structures in a manner that is said to improve the lives of the individuals living in or using the space. “Feng shui” translates as “wind-water”, a reference to the belief that positive and negative life forces ride the wind and scatter, but are retained when they encounter water.

18. One of the Twelve Olympians : ARES
The Greek god Ares is often referred to as the Olympian god of warfare, but originally he was regarded as the god of blood-lust and slaughter.

22. 1980s South African president : BOTHA
P. W. Botha was prime minister of South Africa from 1978 to 1984, and the country’s first state president from 1984 to 1989. Botha was an advocate of the apartheid system, but was given credit for steps taken towards equality by the magnanimous Nelson Mandela.

31. Turkish title : AGA
An aga, or agha, is a title that was used by both civil and military officials in the Ottoman Empire.

36. Val d’___ (French ski resort) : ISERE
Val d’Isère is a noted ski resort in south-eastern France, lying just 3 miles from the Italian border. If you’ve ever watched the British sitcom “Absolutely Fabulous”, Edina and Patsy used to holiday in Val d’Isère whenever they got they chance.

37. Humanoid race in “Avatar” : NAVI
I went to the 3D version of “Avatar” when I saw it for the first time … it really is the only way to see that movie!

43. “Unto us ___ is given” : A SON
“Unto us a son is given”, are words from Handel’s “Messiah”, actually from the book of Isaiah: “For unto us a Child is born, unto us a Son is given: and the government shall be upon His shoulder: and His name shall be called Wonderful, Counsellor, the mighty God, the everlasting Father, the Prince of Peace.”

George Frideric Handel was the King of the oratorio. His most famous oratorio, “Messiah” was actually performed first in Dublin, Ireland, back in 1742.

44. Called, as Buckingham Palace : RANG UP
“Rang up”, made a telephone call.

45. Formerly much-ballyhooed fitness program : TAE BO
Tae Bo isn’t an ancient martial art, but was developed as a form of aerobic exercise in the 1990s. It was introduced by taekwondo expert Billy Blanks who gave it the name tae bo, a melding of taekwondo and boxing.

46. Collapsed company of 2001 : ENRON
After all the trials following the exposure of fraud at Enron, several of the key players ended up in jail. Andrew Fastow was the Chief Financial Officer. He plea-bargained and received ten years without parole, and became the key witness in the trials of others. Even Fastow’s wife was involved, and was sentenced to one year for helping her husband hide money. Jeffrey Skilling (ex-CEO) was sentenced to 24 years and 4 months. Kenneth Lay (CEO) died in 2006 after he had been found guilty and before he could be sentenced. The accounting firm Arthur Andersen was found guilty of obstruction of justice for shredding thousands of pertinent documents and deleting emails and files (a decision that the Supreme Court later overturned on a technicality). But still, Arthur Andersen collapsed under the weight of the scandal and 85,000 people lost their jobs (despite only a handful being directly involved with Enron).

47. Watts of “The Ring” : NAOMI
Naomi Watts was born in the UK and moved to Australia when she was 14 years of age. It was in Australia that she got her break in television and movies. Probably her most acclaimed role was in the 2003 film “21 Grams” with Sean Penn and Benicio del Toro. Watts is best friends with fellow Australian actress Nicole Kidman.

48. Astronaut’s wear : G-SUIT
A G-suit is needed when astronauts and aviators are subject to high accelerations. Such acceleration can cause blood to pool in the lower part of the body, reducing the supply to the brain and possibly leading to a black-out. A G-suit is basically a special pair of tight-fitting pants that is fitted with inflatable bladders. The bladders inflate during high accelerations, tightening around the legs and abdomen, reducing the amount of blood pooling.

55. Kobe cash : YEN
Kobe is a city on the island of Honshu in Japan, and yes, basketball star Kobe Bryant is named after the Japanese city.