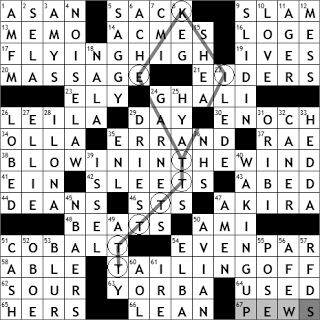 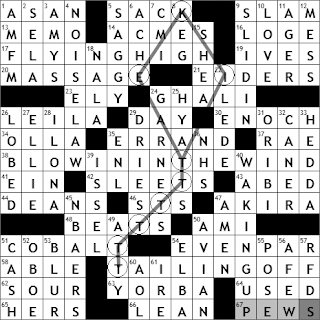 CROSSWORD SETTER: Peter A. Collins
THEME: TAILING OFF … all the theme answers relate to kite-flying, and the four circled letters K-I-T-E form the shape of a kite when joined with a line. The remaining Ts in the grid, if circled and joined with a line, form the tail of the kite. The themed answers are:

17A. On cloud nine : FLYING HIGH
38A. Bob Dylan song … or a hint to the object found by connecting the four circled letters in a diamond : BLOWIN’ IN THE WIND
59A. Waning … or a hint to what is found by circling all the T’s in the completed puzzle : TAILING OFF


Today’s Wiki-est, Amazonian Googlies
Across
9. Poetry fest : SLAM
A poetry slam is a competition, in which poets read their own work (usually), with winners being chosen by members of audience. Apparently the first poetry slam took place in Chicago in 1984. Now there is a Nation Poetry Slam that takes place each year, with representatives from the US, Canada and France.

13. It might have the heading “Re:” : MEMO
A memorandum is a “thing to be remembered” in Latin, from the verb “memorare” meaning “to call to mind”.

14. Crowning points : ACMES
The “acme” is the highest point, coming from the Greek “akme” which has the same meaning.

17. On cloud nine : FLYING HIGH
I don’t think that anyone is really certain of the etymology of the term “cloud nine”, but I do like this explanation … the 1896 “International Cloud-Atlas” was a long-standing reference used to define cloud shapes. The biggest, puffiest of all cloud shapes (and most comfortable looking to lie on) is cumulonimbus. And you guessed it, of the ten cloud shapes defined in the atlas, cumulonimbus was cloud nine.

19. Burl of stage and song : IVES
As well as being an actor, Burl Ives was a folk singer, his original calling. In Hollywood he had a distressing experience with the House Unamerican Activities Committee and avoided being blacklisted by cooperating to some level with McCarthy and his team. This cooperation created a rift between him and Pete Seeger in particular, a fellow singer whom he “discussed” with the committee.

21. Commercially prized ducks : EIDERS
Eiders are large seaducks. Their down feathers are used to fill pillows and quilts, giving the name to the quilt called an “eiderdown”.

23. Cathedral city of England : ELY
Ely Cathedral is a famous and beautiful church in the city of Ely in the county of Cambridgeshire. There is a Gothic door on the north face of the cathedral that was designed by Sir Christopher Wren, the man responsible for St. Paul’s Cathedral in London. Christopher Wren had a personal link to the church, as his uncle was the Bishop of Ely.

24. Boutros Boutros-___ (former U.N. chief) : GHALI
Boutros Boutros-Ghali is an Egyptian diplomat, the sixth Secretary-General of the United Nations. Boutros-Ghali was nominated for a second term as Secretary-General in 1996, but the US used its right of veto to block the appointment. According to senior delegates, the US wasn’t too happy with his handling of the international crisis in Bosnia.

34. Large crock : OLLA
An olla is a traditional clay pot used for the making of stews.

37. “Norma ___” : RAE
“Norma Rae” is a 1979 movie starring Sally Field, a tale of union activities in a textile factory in Alabama. The film is based on the true story of Crystal Lee Sutton told in a 1975 book called “Crystal Lee, a Woman of Inheritance”.

38. Bob Dylan song … or a hint to the object found by connecting the four circled letters in a diamond : BLOWIN’ IN THE WIND
Bob Dylan wrote the famous song “Blowin’ in the Wind” in 1963, apparently taking all of ten minutes to finish the whole composition.

44. Auburn heads? : DEANS
Auburn University in Alabama was chartered in 1856, as the East Alabama Male College. The school was renamed when it was granted university status in 1960.

46. Bourbon and others: Abbr. : STS
When New Orleans was founded, the House of Bourbon was ruling France. Bourbon Street was named in its honor.

47. Director Kurosawa : AKIRA
Akira Kurosawa was an Oscar-winning Japanese film director. His most famous movie to us in the West has to be “The Seven Samurai”, the inspiration for the “The Magnificent Seven” starring Yul Brynner, and indeed a basis for “Star Wars: The Clone Wars”.

51. Discontinued Chevrolet model : COBALT
The Cobalt was Chevrolet’s compact car from 2005 to 2010, when it was replaced by the Chevrolet Cruze.

President Richard Nixon was born in 1913 in a house his father built in Yorba Linda, California. I toured the house a few years ago as it now sits on the grounds of the Richard Nixon Presidential Library.

2. Ward of “Sisters” : SELA
Sela Ward turns up in crosswords a lot. She played Teddy Reed in the TV show “Sisters” in the nineties, and was in “Once and Again” from 1999-2002. I don’t know either show, but I do know her from the medical drama “House” in which she played the hospital’s lawyer, and Greg House’s ex-partner. That was a fun role, I thought. Now she has turned up on CSI: NY, a very welcome and much-needed addition to the cast …

3. Writers Lowell and Tan : AMYS
Amy Lowell was an American poet, the winner of the Pulitzer Prize for Poetry in 1926 for “What’s O’Clock”.

Amy Tan lives not too far from here in Sausalito, just north of San Francisco. She is an American writer of Chinese descent whose most successful work is “The Joy Luck Club”. “The Joy Luck Club” was made into a movie produced by Oliver Stone in 1993. The novel and movie tell of four Chinese-American immigrant families in San Francisco who start the Joy Luck Club, playing Mahjong for money and eating delicious food.

15. 2000 World Series locale : SHEA
Shea Stadium in Flushing Meadows, New York was named after William A. Shea, the man credited with bringing National League baseball back to the city, in the form of the New York Mets.

22. ___ France : ILE DE
Ile de France (literally “Island of France”) isn’t an island at all. It is the name given to the most populous of France’s 26 administrative regions, and is roughly equivalent to the Paris metropolitan area.

25. Some hotels : HYATTS
The Hyatt hotel chain takes its name from the first hotel in the group, that was purchased in 1957 … Hyatt House at Los Angeles International Airport. Among other things, Hyatt is famous for designing the world’s first atrium hotel, the Hyatt Regency in Atlanta.

27. “Dallas” matriarch : ELLIE
Miss Ellie was the matriarch of the famed Ewing family, around which the TV series “Dallas” was written. For most of the series, Miss Ellie was played by Barbara Bel Geddes, and once in a TV movie of Dallas by Molly Hagan. Barbara Bel Geddes left the show in 1984, and was replaced by the much more celebrated actress, Donna Reed. When Bel Geddes decided to return to the show the following year, Reed was fired, much to her chagrin, and a law suit ensued.

28. Massey of old movies : ILONA
Ilona Massey was a Hollywood actress, a native of Budapest in Hungary. Given her cultural background and the period at which she hit the big screen, she was marketed by the studios as “the new Dietrich”.

32. Rattan worker : CANER
Rattan is the name of a large number of species of palms, all of which look less like trees and more like vines. The woody stems are used for making cane furniture.

36. Selective high-school org. : NHS
The National Honor Society (NHS) is a recognition program open to students who have demonstrated excellence in grades 10-12.

39. Hall-of-Fame hoopster Dan : ISSEL
Dan Issel is a retired basketball player who played for the Kentucky Colonels of the ABA, and the Denver Nuggets of the NBA.

49. Lincoln, e.g., before he was pres. : ATTY
Abraham Lincoln served as a prairie lawyer for many years, meaning that twice a year he traveled from town-to-town for ten weeks at a time. He worked a lot on disputes involving the operation of river barges under railway bridges, and argued a case before the US Supreme Court involving a canal boat that sank after hitting a bridge. His exposure to river vessels led to him designing a device for buoying vessels over shallow shoals. He was awarded a patent for his design in 1849, making Lincoln the only US president to hold a patent.

52. Letter before Peter in an old phonetic alphabet : OBOE
Nowadays we tend to use the NATO Phonetic Alphabet (Alfa, Bravo, Charlie etc.) but before this was introduced in 1956, the Joint Army/Navy Phonetic Alphabet was common. This latter series started with Able, Baker, Charlie, with O and P represented by Oboe and Peter. The NATO equivalents for O and P are Oscar and Papa.

54. Island whose name is another word in this puzzle spelled backward : ELBA
(58. Proficient : ABLE)
I had a lovely two-week vacation in Tuscany once, including what was supposed to be a two-night stay on the island of Elba. I had envisioned Elba as a place full of history, and maybe it is, but it is overrun with tourists who use it as a beach getaway. We left after one day, and we won’t be going back.

57. Country addresses: Abbr. : RFDS
Rural Free Delivery was started in the US in 1891. Prior to RFD, rural Americans had to travel to the nearest post office to pick up their mail.

60. Popular I.S.P. : AOL
An Internet Service Provider (ISP) is just what its name indicates, a company that provides its customers with access to the Internet. One way that ISPs differentiate themselves from each other is in the way that the end users are connected to the ISPs network. So, there are cable ISPs, DSL ISPs, dial-up ISPs and satellite ISPs. I’d go with cable if I were you, if it’s available in your area …