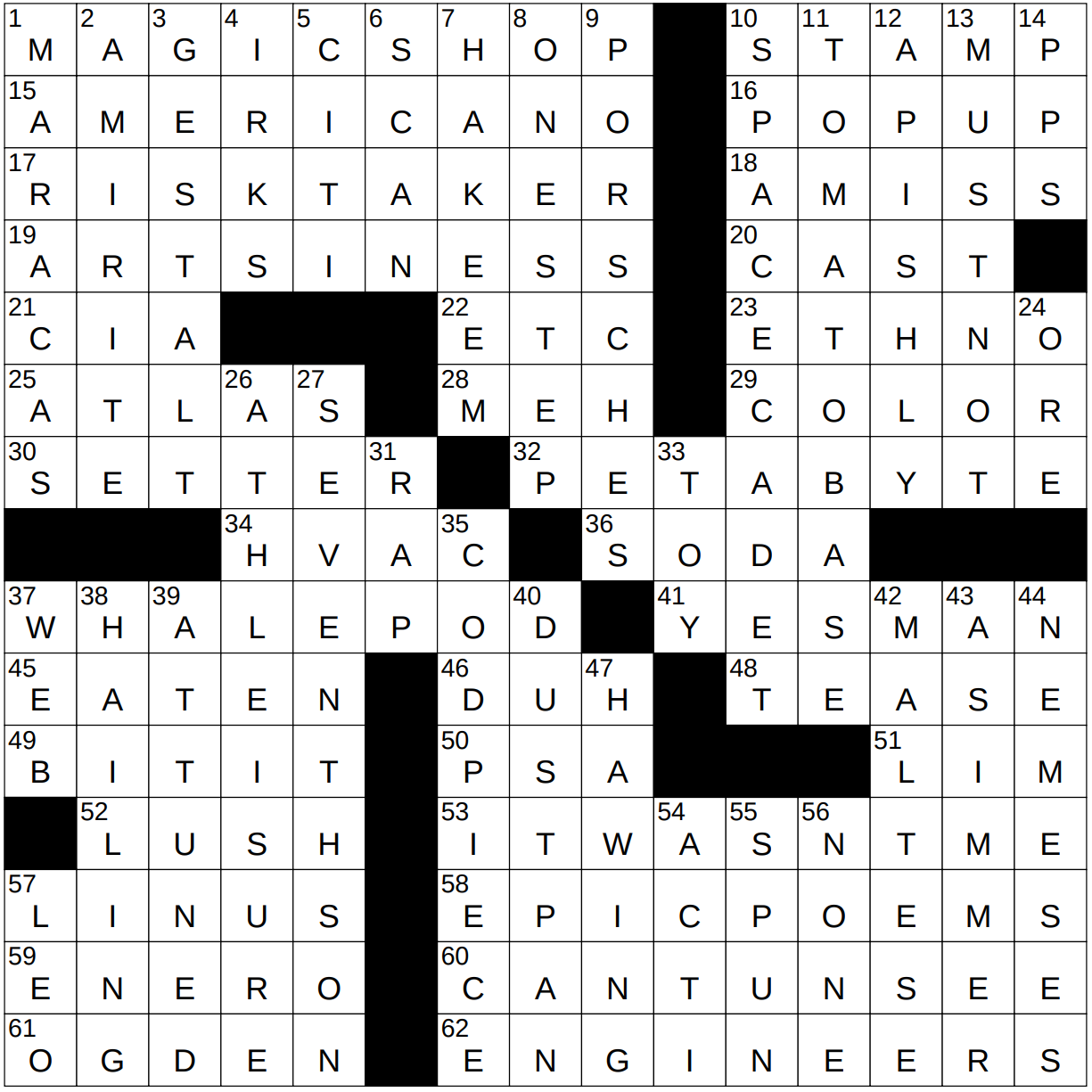 Constructed by: John Hawksley
Edited by: Will Shortz

A caffè Americano is espresso to which hot water is added, bringing the coffee to a similar strength as drip coffee. Caffè Italiano is a similar drink, but a little stronger, with a 1:1 ratio of espresso to hot water.

21 Org. with many overseas workers : CIA

To be ethnocentric is to believe in the superiority of one’s own race, or to have an obsessive concern with race.

Someone described as “lickspittle” is toady, a sycophant. It’s a term that entered the language in the early 1800s.

50 Something a TV station may not earn money from, for short : PSA

57 Boy who said “Sure, Charlie Brown, I can tell you what Christmas is all about” : LINUS

In Charles Schulz’s fabulous comic strip “Peanuts”, Charlie Brown is friends with at least three members of the van Pelt family. Most famously there is Lucy van Pelt, who bosses everyone around, and who operates a psychiatric booth that looks like a lemonade stand. Then there is Linus, Lucy’s younger brother, the character who always has his security blanket at hand. Lastly there is an even younger brother, Rerun van Pelt. Rerun is constantly hiding under his bed, trying to avoid going to school.

Maracas are percussion instruments that are native to Latin America. They are constructed from dried shells, like those of a coconut, to which handles are attached. The shells are filled with dried seeds or beans, and played by shaking.

“Gestalt” is a German word meaning “shape”. The principles of gestaltism were developed in Germany in the early 1900s. One of the main tenets is that “the whole is greater than the sum of the parts”.

5 Corp. with a red umbrella implied in its logo : CITI

6 What classic sonnets do : SCAN

A sonnet is a 14-line poem with a specific structure and rhyming scheme. A popular rhyming scheme for what is known as the Italian sonnet is ABBA, ABBA, CDECDE. Compare this with the Shakespearean sonnet which rhymes as ABAB, CDCD, EFEF, GG.

Hakeem Olajuwon is a retired Nigerian American basketball player. Hakeem was born in Lagos in Nigeria, and came to the US to play for the University of Houston. He was drafted by the Houston Rockets in 1984, ahead of the likes of Charles Barkley and Michael Jordan.

We tend to say the name “Porsche” in English as if it is perhaps French, pronouncing it as one syllable. In German, it is pronounced with two syllables, i.e. Por-sche.

11 What makes clam chowder “Manhattan” rather than “New England” : TOMATO BASE

According to folklore, the seventh son of a seventh son has special powers. Tradition dictates that the seven sons in each family must be born sequentially, with no daughters intervening.

40 Item on a janitorial cart : DUSTPAN

When James Cameron made his epic movie “Titanic”, released in 1997, it was the most expensive film ever made and cost about $200 million. It was a good investment for the studio as it became the highest-grossing film of all time, bringing in over $1.8 billion. “Titanic” remained the highest-grossing film until 2010, when Cameron eclipsed the prior record with “Avatar”.