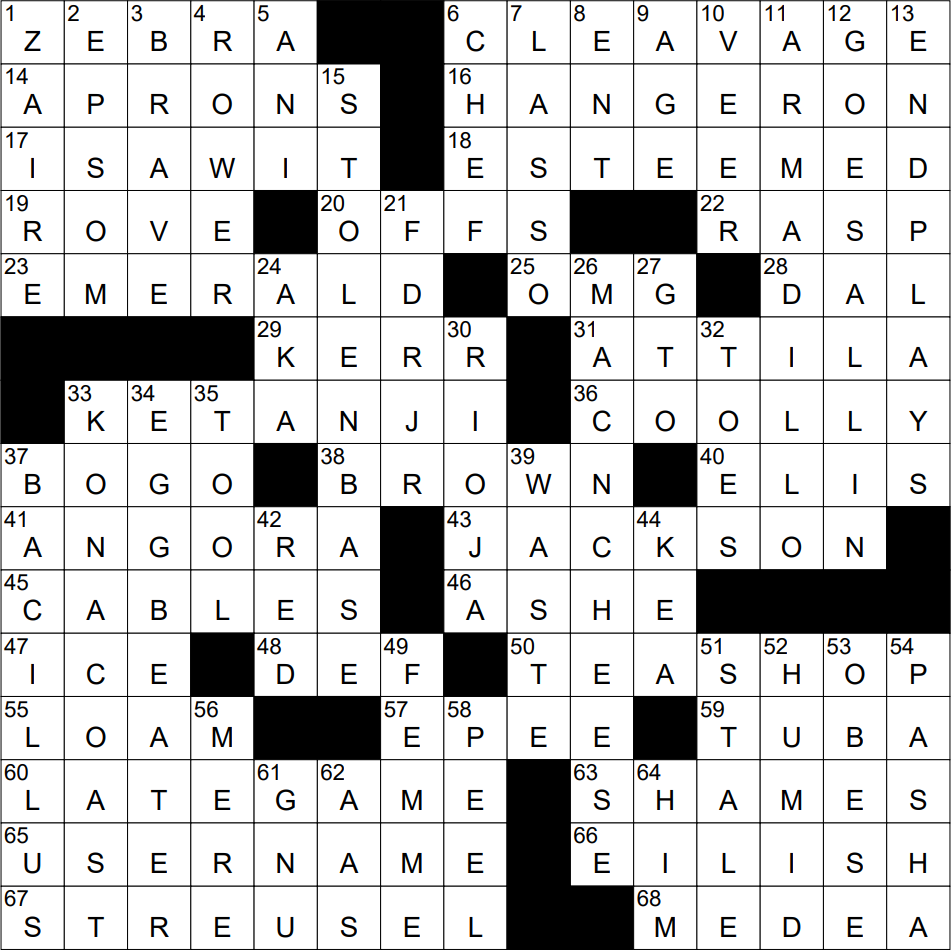 Demetri Martin is a stand-up comedian and actor from New York City. Martin has a distinctive deadpan style of delivery, a style that is influenced by fellow comedian Steven Wright. Martin is also fond of using a large white pad in his stage act.

14 They come with strings attached : APRONS

In Old French, a “naperon” was a “small table-cloth”. The term was absorbed into English as “napron”, describing a cloth used to cover the front of a person at work. Over time, “a napron” was heard as “an apron”, giving us our contemporary noun “apron”.

To ice, to off, to whack, to knock off, to murder.

Back in the 14th century, a “lozenge” was a “diamond shape”. The original lozenges were tablets held in the mouth to dissolve. They had this diamond shape, hence the name.

The Washington city of Seattle was founded on a site that had been occupied by Native Americans for over 4,000 years before the first Europeans arrived in the area. The name “Seattle” was chosen in honor of the Suquamish and Duwamish Chief Seattle, who had a reputation for welcoming white settlers.

31 Foe of the Roman Empire : ATTILA

Nominated by President Joe Biden, Ketanji Brown Jackson succeeded Associate Justice Stephen Breyer on the US Supreme Court in 2022. In doing so, she became the first Black woman to serve on the court. Jackson clerked for Justice Breyer, from 1999 to 2000.

The rock band Three Dog Night had its first and biggest success back in 1969 with the Harry Nilsson song “One”. The song is perhaps best known for its opening words, “One is the loneliest number …” Three Dog Night took their name from an Australian expression. Apparently, indigenous Australians would sleep in a hole in the ground alongside their tame dingoes. On a cold night, they would huddle up to two dingos, and if it was really, really cold, it was a “three-dog night”.

One might find a definition (def.) in a dictionary (dict.).

I guess the reference here is to the oft-quoted British phrase “a spot of tea”. Mind you, I’ve only ever heard that said in jest …

55 Bagful purchased at a nursery : LOAM

Streusel is a crumbly topping made from flour, butter and sugar that is baked on top of pies, breads and muffins.

In Greek mythology, Medea was the wife of Jason, the heroic leader of the Argonauts. Medea was a sorceress who pledged to help Jason in his search for the Golden Fleece, on condition that he take her as his wife. According to some accounts, Jason left Medea and took up with Glauce, the daughter of the king of Corinth. Medea got her own back by sending Glauce a golden coronet and a dress that were covered with poison. The poison killed Glauce, and her father the king. To further her revenge on Jason, Medea killed two of her own children that were fathered by him.

1 Former name of the second-largest country in Africa : ZAIRE

The nine-banded armadillo is the most common species of armadillo found in the Americas. The “bands” are bits of armor that circle the body of the armadillo. The term “nine-banded” is a bit of a misnomer as there aren’t always nine bands, but there are usually seven to eleven.

24 Connector of two names : AKA

27 Car modified into the Monkeemobile : GTO

The Monkeemobile was designed in 1966 for the TV show “The Monkees”. Two of the vehicles were constructed, both modified Pontiac GTOs.

Sir John Falstaff is the lead character in Shakespeare’s “The Merry Wives of Windsor” and a supporting character in the two “Henry IV” plays. Falstaff is a self-promoting, obese and cowardly man. In “Henry IV, part I”, Falstaff refers to his portly size, saying, “thou seest I have more flesh than another man, and therefore more frailty.”

54 Title bestowed by a sultan : PASHA

A chemical peel is a technique used to improve the look and feel of the skin. It involves using a chemical to deliberately injure the outermost layer of the skin. The damaged skin dies and peels off, revealing regenerated skin below.

“Vikki Carr” is the stage name of singer Florencia Bisenta de Casillas Martínez Cardona, born in El Paso. Most of Carr’s success came with songs released in Spanish, but also had a big hit in 1967 with the English-language song “It Must Be Him”.