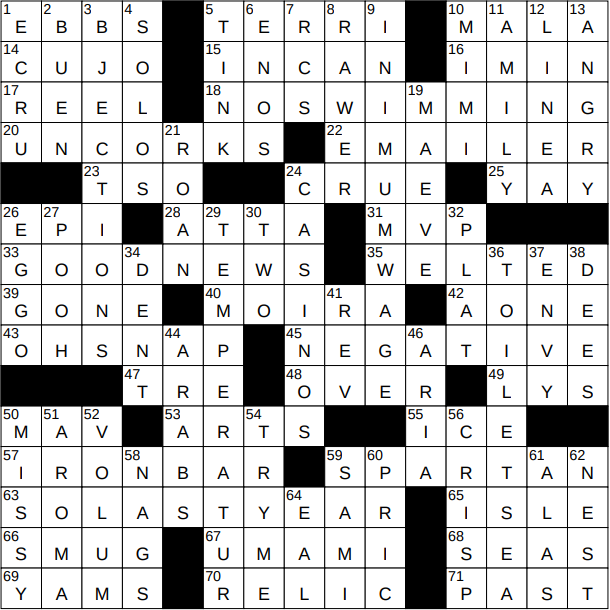 Today’s Theme (according to Bill): Raise, or Lower

Terri Clark is a country music artist from Montreal in Canada who has had success right across North America, and who now resides in Nashville, Tennessee.

“Mala fide” is Latin for “in bad faith” and is in essence the opposite to “bona fide” meaning “in good faith”. Bad faith is a concept defined by the law that addresses the motives behind certain actions.

“Cujo” is a 1981 Stephen King horror novel, which means that I haven’t read it (I don’t do horror). The character Cujo is a rabid St. Bernard dog which besieges a young couple for three days in their stalled car. King tells us that he lifted the dog’s name from real life, as Cujo was the nickname of Willie Wolfe, one of the men responsible for the 1974 kidnapping of Patty Hearst by the Symbionese Liberation Army.

Viracocha was an important deity in the Inca civilization, the creator of all things.

Mötley Crüe is an American rock band from Los Angeles. They’ve been around since 1981, co-founded by the famous drummer Tommy Lee. Tommy Lee is also known for his two celebrated marriages, the first with Heather Locklear and the second with Pamela Anderson. The name “Mötley Crüe” was chosen as someone once described the band members as a “motley looking crew”. The spelling was made to look a little more exotic, with the umlauts added over the “o” and “u” one day, as the band were drinking bottles of “Löwenbräu” beer!

31 Something a game may have, for short : MVP

“Schitt’s Creek” is a very entertaining Canadian sitcom created by two of the four leading actors: Dan Levy and his father Eugene Levy. The other two leads are played by Catherine O’Hara and Annie Murphy. It is about a very wealthy family who lose their money and relocate to a small town called Schitt’s Creek, which they had once purchased as a joke. Recommended …

The more formal name for a walkie-talkie is “handheld transceiver”. It is a handheld, two-way radio, and a device first developed for military use during WWII by Motorola (although others developed similar designs soon after). The first walkie-talkie was portable, but large. It was back-mounted and was carried around the battlefield by a radio officer.

57 Product made by smelting : IRON BAR

The Shroud of Turin has to be one of the most controversial, and most studied, human artifacts ever unearthed. The Shroud is a linen cloth on which there is the image of a man who appears to have wounds inflicted by crucifixion. Many believe that the Shroud is the burial cloth in which Jesus Christ was placed after he died on the cross. The Shroud was kept in various locations in France for centuries before being moved to Turin Cathedral in 1578, from which it gets its name, and where it has been located ever since.

7 Alternatives to Cokes and Pepsis : RCS

Maeve Binchy was a fabulous Irish novelist, and in my day a famous newspaper columnist whose column I would read daily. A few of her novels have made it to the big screen, including two I would recommend: “Circle of Friends” starring Chris O’Donnell and Minnie Driver, and “Tara Road” starring Andie MacDowell.

“Circle of Friends” is a 1990 Maeve Binchy that was adapted into a very successful 1995 feature film. The story revolves around two childhood friends and the life they lead while attending in their teens University College Dublin (my own alma mater). The film verison stars (American) actor Chris O’Donnell and (English) actress Minnie Driver.

21 Horse of a certain color : ROAN

24 Where $50 bills and crossing your legs may be considered bad luck : CASINOS

27 Fictional character who says “A day without a friend is like a pot without a single drop of honey left inside” : POOH

30 Helium, on the periodic table : TWO

A plat is a map showing actual and planned features, so a town might have a plat showing existing and intended buildings.

The borders (ends) of the word “defend” are letters D (dees).

Dubai is one of the seven emirates that make up the federation known as the United Arab Emirates (UAE). The two largest members of the UAE (geographically) are Dubai and Abu Dhabi, the only two of the seven members that have veto power over UAE policy.