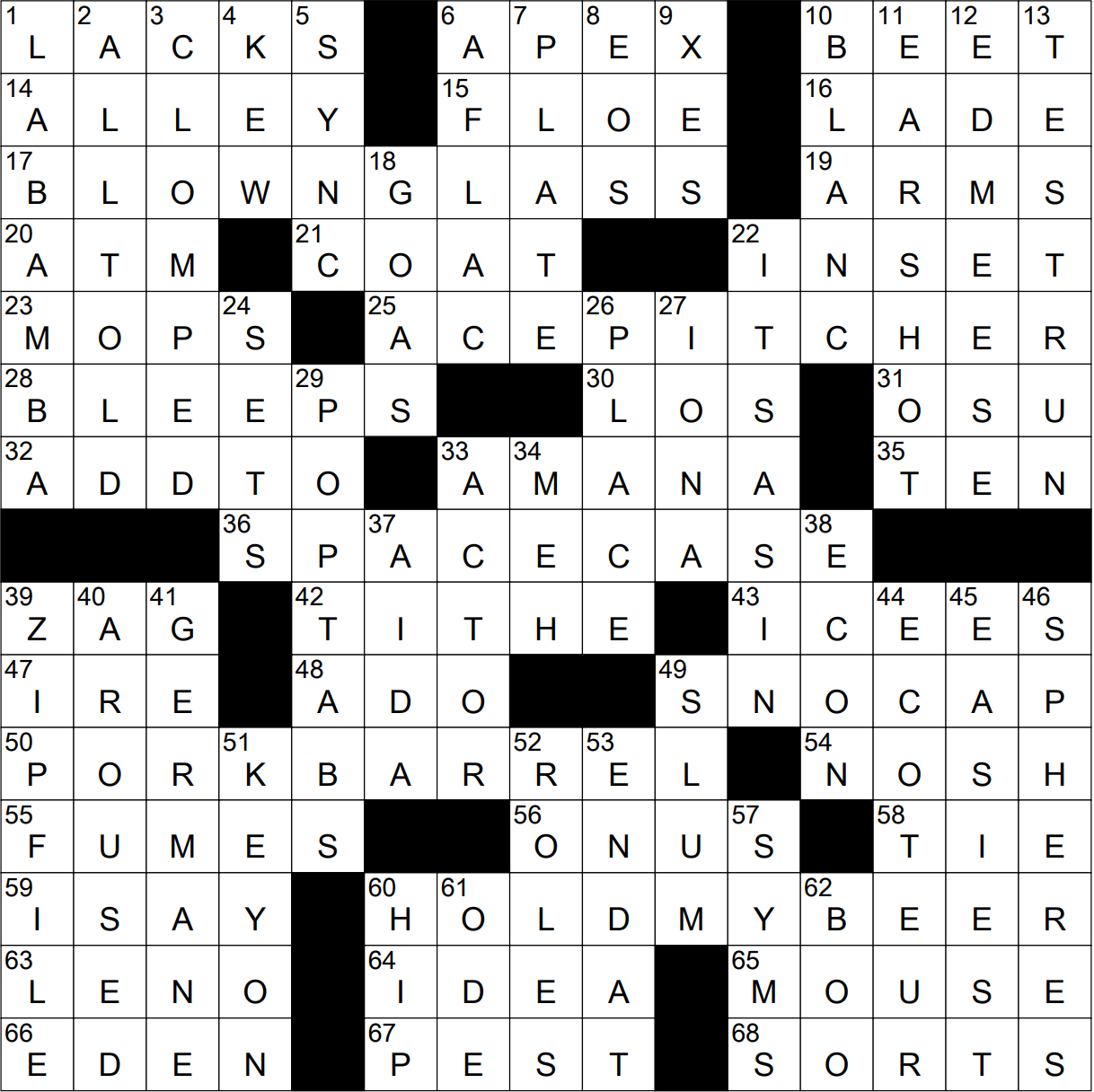 Themed answers HOLD (end with) a container for BEER:

“It’s the Hard-Knock Life” is a song written for the 1977 Broadway musical “Annie”. The musical was based on Harold Gray’s comic strip “Little Orphan Annie”. There were two subsequent film adaptations, both really quite successful, including one released in 1982 directed by John Huston of all people. “Annie” was Huston’s only ever musical.

36 Type who’s out of touch with reality : SPACE CASE

48 Something about nothing, perhaps : ADO

The phrase “much ado about nothing” was coined by William Shakespeare when he used it as the title of his celebrated comedy. We use the phrase to describe a big fuss over a trifling issue.

Pork-barrel politics have been around for a long time. The term “pork barrel” originated in 1863 in a story by Edward Everett Hale called “The Children of the Public”. Hale used the phrase in a positive way, describing any public spending by the government for the benefit of citizens. By the 1870s the term “pork” had negative connotations, with references in the press to “pork-barrel bills” in Congress. Nowadays “pork” really applies to any government project designed to benefit a relatively small group of citizens (usually potential voters for a particular politician) with the bill being paid by the citizenry as a whole.

“By Jove!” is a mild oath that calls on the Roman god Jove, who was also known as Jupiter.

66 Home of the tree of knowledge : EDEN

“La Bamba” is a folk song from Veracruz, Mexico that became a huge hit for Ritchie Valens in 1958. iT appears in the oft-cited list of the 500 Greatest Songs of All Time compiled by “Rolling Stone” magazine, and is the only song in the list not sung in English. The song lent its name to the 1987 biopic about the life of Ritchie Valens, starring Lou Diamond Phillips as Valens.

Kew Gardens is a beautiful location in southwest London that was formerly known as the Royal Botanic Gardens. Kew Gardens has the world’s largest collection of different living plants.

6 Company with a “spokesduck” : AFLAC

7 Division of the earth’s crust : PLATE

The outermost shell of our planet comprises eight major tectonic plates, and numerous small plates. The heat from within the Earth causes the plates to move, albeit very slowly, creating earthquakes and volcanic eruptions where the plates meet each other.

Ed Meese was born in Oakland, California and spent 24 years in the office of the Treasurer of Alameda County, the county in which I used to live. After military service, Meese earned himself a law degree at UC Berkeley. Later, as chief of staff for President Reagan, he was instrumental in a famous decision to crack down on student protesters at Berkeley which resulted in one protester dying and a two-week occupation of the city by the California National Guard.

Iona College is a Roman Catholic school run by Christian Brothers in New Rochelle, New York. The Brothers named the college for the island of Iona off the west coast of Scotland on which is located Iona Abbey, which was founded by St. Columba. The school’s sports teams are called the Iona Gaels, and the team mascot goes by the name “Killian”.

A .ZIP file is one that has been compressed. The ZIP file format was co-developed and introduced by programmer Phil Katz in 1989.

44 Portmanteau for a radical environmentalist : ECOTEUR

There is a story that disgruntled textile workers would kick their wooden shoes, called “sabots”, into the looms in order to disable them so that they didn’t have to work. This act of vandalism was named for the shoe, an act of … “sabotage”.