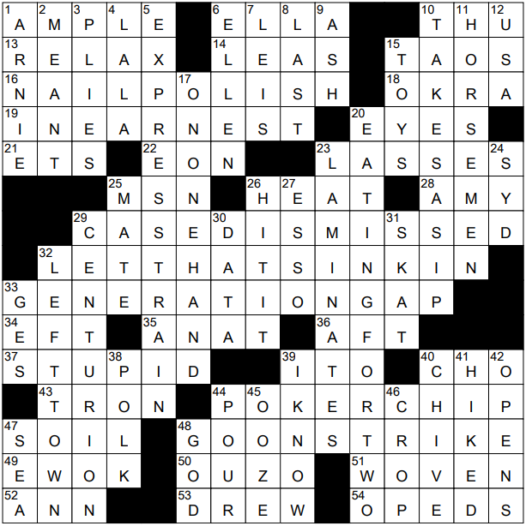 “Ella and Basie!” is the 1963 album in which Ella Fitzgerald sings, with the Count Basie Orchestra accompanying. The album marked only the second time that Fitzgerald and the Basie band had recorded together, the previous occasion being the recording of “One O’Clock Jump” in 1957.

15 Artist colony in a desert : TAOS

MSN Explorer is a special form of the Internet Explorer web browser that integrates MSN and Windows Live.

26 Something that may be packed : HEAT

Film director Amy Heckerling is from the Bronx in New York. She was at the helm for several notable films, including “Fast Times at Ridgemont High”, “National Lampoon’s European Vacation” and “Clueless”.

33 What might be found between X and Z? : GENERATION GAP

36 Direction of many a lavatory on a plane : AFT

The fictional forested moon of Endor features prominently in the “Star Wars” movie “Return of the Jedi”. The moon is home to the race of furry aliens known as Ewoks. Filming for the forest scenes actually took place in Humboldt Redwoods State Park in Northern California.

The WB Television Network was launched in 1995 as a joint venture between Warner Bros. Entertainment and Tribune Broadcasting. The WB (for “Warner Bros.”) was shut down in 2006 and replaced by the CW (for “CBS” and “Warner Bros.”).

3 Bends at the Bolshoi : PLIES

Actress Ellen Pompeo is perhaps best known for playing the title character in the TV medical drama “Grey’s Anatomy”. That gig has paid well. Pompeo was ranked third in the “Forbes” list of highest-paid TV actresses in 2017, with Sofia Vergara (from “Modern Family”) and Kaley Cuoco (from “The Big Bang Theory”) holding the first and second spots respectively.

12 Nation conspicuously missing from the Wilson-proposed League of Nations, in brief : USA

President Woodrow Wilson was awarded the Nobel Peace Prize in 1919. He was so honored in recognition of his efforts to promote peace around the world, and in particular for the leading role he played in setting up the League of Nations after WWI (despite his failure to gain support for the organization from the US Congress).

26 Cry made while swinging a baton : HIT IT!

That would be a cry from a bandleader.

A centurion was a professional officer in the Roman army who was in command of a “centuria”, a group of about one hundred men.

31 Card game in which jacks are the top four trumps : SKAT

The General Electric Company is usually referred to simply as “GE”. One of the precursor companies to GE was Edison General Electric, founded in 1890 by the inventor Thomas Edison. What we know today as GE was formed two years later when Edison merged his company with Charles Coffin’s Thomson-Houston Electric Company. In 1896, GE was selected as one of the 12 companies listed on the newly formed Dow Jones Industrial Average. GE was the last of the original 12 to survive on that list, being replaced by Walgreens in 2018. I spent over ten years with GE at the beginning of my working career, and in fact it was GE that asked me to transfer to the US from Ireland back in the 1980s …

46 Take to another dimension? : CROP