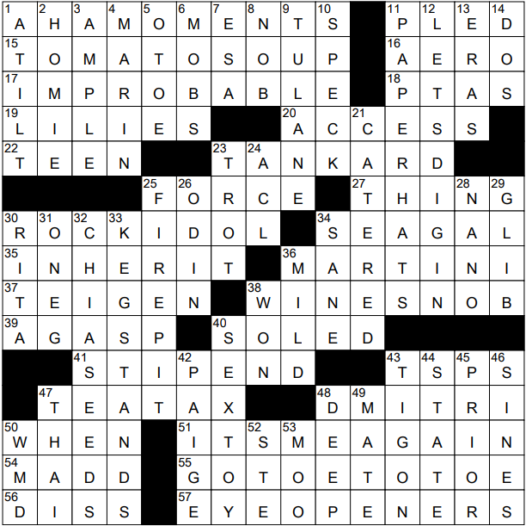 Andy Warhol went through a period of painting iconic American products, including Coca-Cola bottles and Campbell’s tomato soup cans. In 1964 he participated in a gallery show called “The American Supermarket”. Along with other pop artists he contributed works including a painting of a can of Campbell’s tomato soup. He priced the painting at $1,500, and sold autographed cans of soup for $6 a piece.

An aerostat is a type of aircraft that doesn’t derive its lift from forward motion like a fixed wing airplane. Instead, the lift comes from buoyancy, as in a balloon or a dirigible.

30 Musician on the cover of Rolling Stone, often : ROCK IDOL

Steven Seagal is known in the US as a martial artist turned actor. Seagal started his career as an Aikido instructor in Japan and was the first foreigner to operate an Aikido dojo in that country.

43 Shortening used in many recipes : TSPS

Tulane University is a private research university in New Orleans, Louisiana. Tulane was founded in 1834 as the Medical College of Louisiana. The university was privatized with the aid of an endowment from philanthropist Paul Tulane in 1884, and as a result the school’s name was changed to Tulane University. The school’s sports teams use the name Tulane Green Wave, and the team mascot is Riptide the Pelican.

The Scoville scale is a measure of the spiciness of chili peppers. The scale was invented by a pharmacist in 1912, Wilbur Scoville. To determine the position of a pepper on the Scoville scale, the amount of capsaicin in the chili is measured. Capsaicin is an irritant that causes the sensation of burning when it comes into contact with tissue, particularly mucous membranes.

Satchel Paige pitched baseball in the Negro League and then the majors, before retiring in 1966. When he moved to the Major League, Paige was 42 as he pitched his first game, making him the oldest ever “rookie” to play Major League Baseball. And when he was elected to the Baseball Hall of Fame in 1971, Paige was the first person to be so honored from the Negro League.

44 Washington, but not Jefferson : STATE

The people from what today is Washington state first petitioned the US Congress for statehood in 1852. At that time the proposal was to name the new state Columbia, but this was rejected as it was felt that a state called Columbia might be confused with the District of Columbia. Somewhat bizarrely, the alternative name of Washington was accepted. Certainly, the name Washington honors the first President, but there’s still potential confusion with the nation’s capital. I hate to admit my ignorance, but as a young man in Ireland, whenever I heard talk of Washington (state), I assumed the discussion was about Washington, D.C. …

Jersey cattle were bred originally on the island of Jersey in the Channel Islands, off the coast of France. If you’ve seen Elsie the Cow, the mascot of Borden in the US, then you’ve seen a Jersey cow.