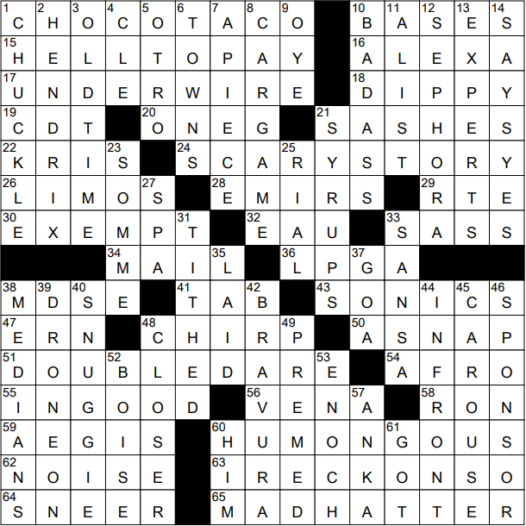 One G, one grand, one thousand dollars.

22 One in the Jenner family : KRIS

In the world of gambling, a high roller is a person who brings a relatively large amount of money to the table and who routinely risks big sums.

The Seattle SuperSonics were the professional basketball team based in Seattle from 1967 to 2008, at which time the franchise moved to Oklahoma City (and became the Oklahoma City Thunder).

When Nickelodeon launched in 1979, it became the first cable channel dedicated to programming for children.

Ron Burgundy is the title character in the “Anchorman” series of films. Burgundy is a news anchor played by comedian Will Ferrell. Apparently Burgundy loves a glass of scotch, poetry, and his dog Baxter.

Something humongous is a very, very large. “Humongous” comes from the words “huge” and “monstrous”.

65 Lewis Carroll character who asks “Does your watch tell you what year it is?” : MAD HATTER

4 The Browns, on scoreboards : CLE

The Somme is a river in the north of France. The name “Somme” comes from a Celtic word meaning “tranquility”. Paradoxically, the Somme is remembered as the site of a devastating WWI battle. The river separated British and French forces from the German army from July to November 1916. By the end of the battle, over one million soldiers had been wounded or killed.

The rial is the currency of Yemen (as well as Oman, Iran and Tunisia). Generally, there are 1,000 baisa in one rial.

31 Gave faithfully, in a way : TITHED

Here in the US, the area separating opposing lanes of traffic on a divided highway called the “median strip”. Over in Britain and Ireland, that median strip is known as the “central reservation”.

46 Name on many a sports jersey : SPONSOR

“Puppy Love” is a song written and recorded by Paul Anka in 1960. He wrote the song for his girlfriend at the time, actress and singer Annette Funicello. “Puppy Love” was covered by Donny Osmond who had a big hit with it in 1972.