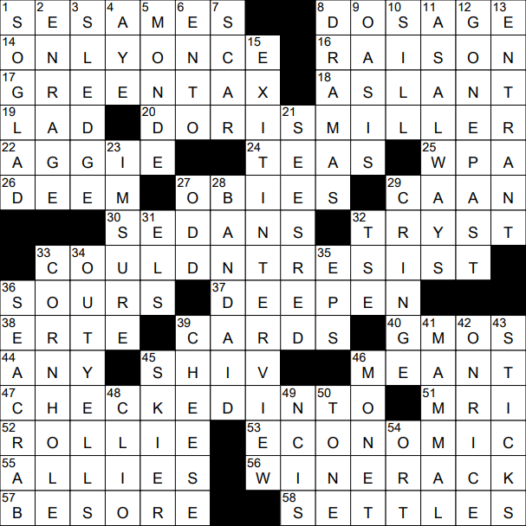 Constructed by: Wendy L. Brandes
Edited by: Will Shortz

The French term “raison d’état” translates as “reason of state”. It is used in English to describe a justification for a nation adopting a foreign policy that puts itself first.

The Work Progress Administration (WPA) was the largest of the New Deal agencies. The WPA employed millions of people during the Depression, putting them to work on various public works projects. The total spending through the WPA from 1936 to 1939 was nearly $7 billion. We have to give the federal government credit for taking an enlightened view of what types of projects qualified for financial support, so artists who could not get commissions privately were hired by the government itself. The result is a collection of “New Deal Art”, including a series of murals that can be found in post offices around the country to this day.

32 Date you might not put on the calendar : TRYST

A sledgehammer is a big hammer, one used to apply a lot of force. The word “sledgehammer” comes from the Anglo Saxon “Slaegan” meaning “to strike violently”. “Slaegan” is also the root of the words “slag”, “slay” and “slog”.

Café du Monde (“Café of the World”) is a famous coffee shop located in the French Quarter of New Orleans. The café has been there a long time, having been established in 1862.

There are three pairs of letters L (els) in the title of Shakespeare’s play “All’s Well That Ends Well”.

Fishing for Alaskan king crab is a dangerous occupation, about 80 times more dangerous that the average job. Apparently, about one crab fisherman dies every week during the fishing season, mostly from drowning or hypothermia.

39 Posers are forever saying it : CHEESE

41 The hare, but not the tortoise : MAMMAL

There are several main characteristics distinguishing mammals from other animals:

43 Nowheresville, with “the” : STICKS

“The sticks” is a slang term meaning “rural area”.

46 Painter with a famous garden : MONET