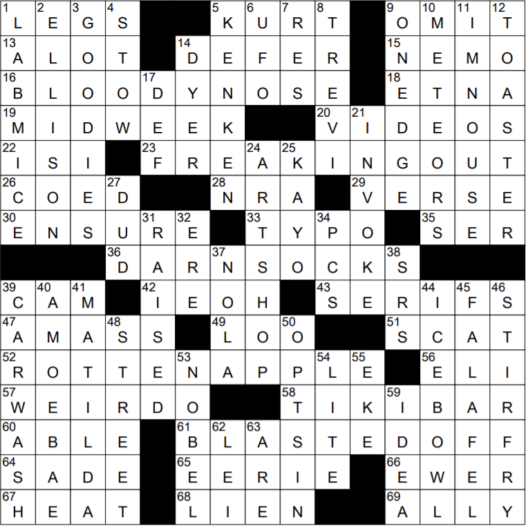 Constructed by: Matt Fuchs
Edited by: Will Shortz

Today’s Theme (according to Bill) I Swear!

Kurt Cobain was famous as the lead singer of the band Nirvana. Cobain was constantly in the spotlight for the last few years of his short life. The media was fascinated with his marriage to fellow rock star Courtney Love, and continually reported on Cobain’s heroin addiction. He finally succumbed to the pressure and committed suicide by inflicting a gunshot wound to his head in 1994, at only 27 years of age.

The much debated statement “it is I” is grammatically correct, and should not be “corrected” to “it is me”. Traditionally, pronouns following linking verbs, such as “is”, “appear” and “seem”, are written in the nominative case. Examples are:

Swarthmore College is a liberal arts school located in the borough of Swarthmore, Pennsylvania, which is just a few miles southwest of Philadelphia. Originally a Quaker school, Swarthmore has been non-sectarian since the early 1900s.

Apple started development of the iPhone in 2004 in collaboration with Cingular Wireless (now AT&T Mobility). The confidential program was given the name “Project Purple”, and took thirty months to complete at a cost of about $150 million. The iPhone was introduced in 2007 at the Macworld convention in San Francisco.

5 Puzzle whose name comes from the Japanese for “cleverness squared” : KENKEN

8 Fountain near the Spanish Steps : TREVI

“Matilda” is a children’s novel by Welsh author Roald Dahl. Hero of the piece is an extraordinary little girl called Matilda Wormwood.

45 Balls in a pocket : FALAFEL