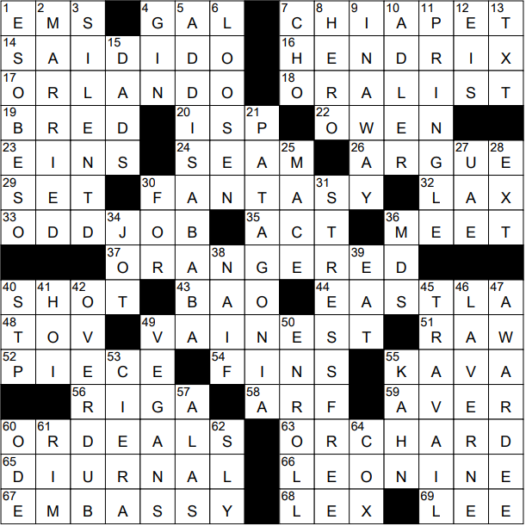 Constructed by: David W. Tuffs
Edited by: Will Shortz

Themed answers each start with the word “OR”:

The start and finish (“wings”) of the word “museum” are letters M (ems).

7 Novelty brand with the slogan “Watch it grow!” : CHIA PET

29 One of several in a Venn diagram : SET

In mathematics, a set is defined as a collection of distinct objects. Remember those Venn diagrams at school? Each of the circles in a Venn diagram represents a set.

56 Where to find lots of Letts : RIGA

65 Active during the day : DIURNAL

The letter D in the word “handsome” is a silent letter D.

10 Irene who’s central to the scandal of “A Scandal in Bohemia” : ADLER

A “text file” is one that includes only plain text, with little or no formatting, not even bold or italic type. Text files in the Windows operating system use the file extension “.txt”.

Dad’s root beer was developed by Ely Klapman and Barney Berns in 1937, and was given the name “Dad’s” in honor of Klapman’s father who used to make root beer for his family at home.

25 Weapon with a heavy head : MACE

27 Home of the Burj Khalifa, for short : UAE

Medical doctors (MDs) might be found in an operating room (OR) or emergency room (ER).

Valvoline is the oldest brand of motor oil marketed here in the US. The formulation was trademarked in 1873.

“Hoi polloi” is a Greek term that translates literally as “the majority, the many”. In English, “hoi polloi” has come to mean “the masses” and is often used in a derogatory sense. Oddly, the term has also come to describe “the elite”.

42 Augment, as a musical track : OVERDUB

49 Ones unlikely to enjoy the land of milk and honey? : VEGANS

Madeline Kahn was an actress best known for her comedic roles, especially those directed by Mel Brooks. Kahn also had her own TV sitcom, called “Oh Madeline”. But, it only lasted one season, in 1983.