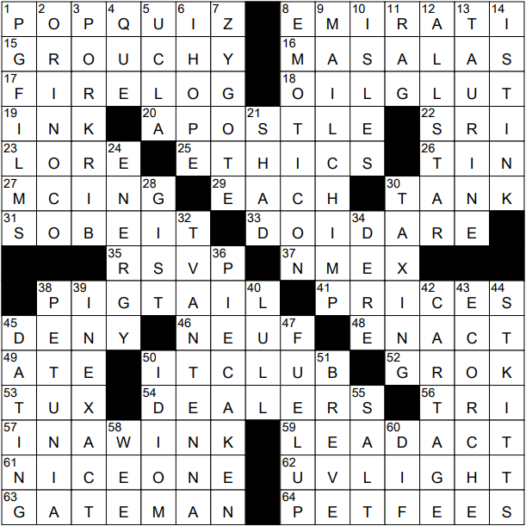 8 Certain native of the Mideast : EMIRATI

“Masala” is a Hindi word meaning “mixture”, and describes a mixture of spices. A dish named “masala” uses the spices incorporated into a sauce that includes garlic, ginger, onions and chili paste. Who doesn’t love Indian cuisine? Yum …

18 Cause of a decrease in the cost of gasoline : OIL GLUT

50 L.A. jazz venue where Thelonious Monk recorded a live album, with “the” : … IT CLUB

Thelonious Monk was a jazz pianist and composer, actually the second-most recorded jazz composer after the great Duke Ellington. That’s a pretty impressive statistic given that Ellington wrote more than 1,000 songs, whereas Monk only wrote about 70. Monk was a pioneer in the development of the jazz style called “bebop”, which gained popularity in the 1940s.

2 River with the second-largest discharge volume in the New World, after the Amazon : ORINOCO

“Zygote” is the name given to the cell formed when (in the case of humans) a sperm fertilizes an egg. It is the earliest stage in the development of an embryo. The term “zygote” comes from the Greek for “joined, yoked”.

“Taurine” is an adjective meaning of or relating to a bull. “Taurus” is Latin for “bull”.

Remember the television antenna called “rabbit ears”? I don’t recall being told this when I was younger, but to get the best reception the length of the “ears” needs to be set at about one half of the wavelength of the signal of the target channel. If only I had known …

The dessert known as piecaken developed in recent years as a Thanksgiving treat. One recipe calls for three types of pie (pumpkin, apple and pecan) baked inside a cake.

38 Flower in the nightshade family : PETUNIA

The flowering plants known as petunias are in a genus related to the tobacco plant. The name “petunia” comes from the obsolete French word “petun” meaning “tobacco plant”.

44 One of the Lesser Antilles : ST KITTS

Saint Kitts is the more familiar name for Saint Christopher Island in the West Indies. Saint Kitts, along with the neighboring island of Nevis, is part of the country known as the Federation of Saint Kitts and Nevis. Saint Kitts has had a troubled history, with the Spanish, British and French all vying for control of the island. Most of the population today is descended from slaves brought onto Saint Kitts to farm tobacco and then sugarcane. Most of the slaves were from Africa, although Irish and Scottish slaves were also used.

When gassing up a car, the fuel gauge might go from empty (E) to full (F).

Where I grew up, a whole note is called a semibreve, and a half note is a minim.

55 What halophobia is the fear of : SALT