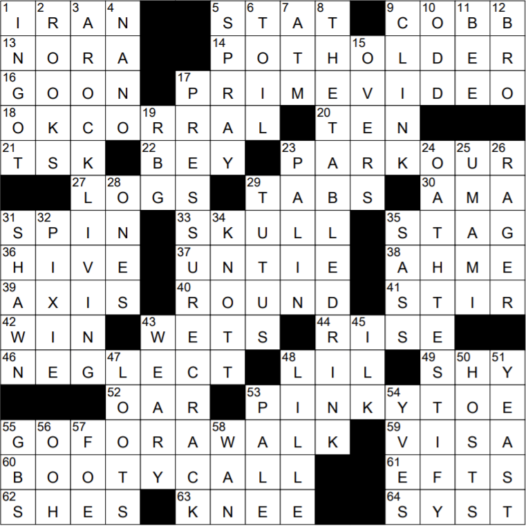 Constructed by: Michael Lieberman
Edited by: Will Shortz

Themed answers are in the down-direction. Each comprises two parts, with one literally located UNDER the other in the grid:

1 Home of many Zoroastrians : IRAN

Zoroastrianism is one of the oldest religions in the world, and held sway in the pre-Islamic Iranian empires from around 600 to 650 BCE. Followers of the tradition worship a single creator god, and follow the teachings of the prophet Zoroaster (also known as “Zarathustra”).

The most famous gunfight in the history of the Old West has to be the Gunfight at the O.K. Corral, which took place in Tombstone, Arizona. Strangely enough, the fight didn’t happen at the O.K. Corral, but played out six doors down the street in a vacant lot next to a photography studio.

20 Number of Emily Dickinson poems, out of the 1,700+ she wrote, that were published during her lifetime : TEN

27 Things you saw while asleep? : LOGS

To saw logs is to snore, to make a sound like the sawing of logs.

35 Animal on a Jägermeister bottle : STAG

Connect Four is an interesting two-player game in which opponents drop colored discs into a vertical grid. The objective is to make straight lines of discs of one color, either horizontally, vertically or diagonally. Disappointingly, the player who goes first can always win the game by playing the right moves.

59 Request at a consulate : VISA

5 Many a cologne : SPRAY

6 Word in a Shakespearean incantation : TOIL

7 Place to get paper with plastic? : ATM

Geraldine Ferraro came to national attention in 1984 when she became the first woman chosen by a major political party as candidate for Vice President. Democrats Ferraro and Walter Mondale were defeated in a landslide by the incumbent Ronald Reagan and George H. W. Bush.

Walter Mondale served as US vice president under President Jimmy Carter. Mondale was also the Democratic candidate defeated by President Ronald Reagan in 1984, losing in the biggest landslide in the country’s history. Mondale only won electoral votes in his home state of Minnesota and in the District of Columbia.

The pixie cut is a hairstyle that is relatively short at the back and sides compared to the top. Famous examples of women wearing the cut are Audrey Hepburn in “Roman Holiday”, Twiggy for much of the 1960s, Goldie Hawn on “Laugh-In” and Halle Berry in the Bond film “Die Another Day”.

Flanders is a region in northern Belgium that includes the Belgian capital of Brussels. The Flemish population are Dutch-speaking, although the residents of Brussels tend to speak French, or are bilingual.

“Arms and the Man” is a play by George Bernard Shaw, a comedy that was first staged in 1894 in London. Shaw came up with the title from the opening words of Virgil’s “Aeneid”, which translates as “Of arms and man I sing”.