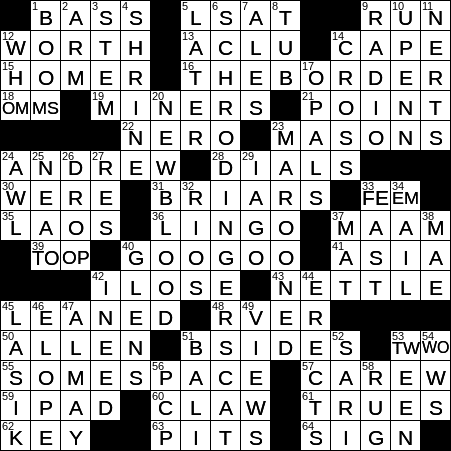 This puzzle has 16 solutions.

I didn’t spot this note until after I filled in one of those solutions, and assumed I was done. Once I read the note, it took me quite a while longer to work out what was going on. There are four pairs of squares in the grid in which a particular letter can go in either of the paired squares. For example, the answer to 18-across is OMS. The M can go in the left square (making 12-down WHOM and 1-down BOOS). The M can also go in the right square (making 12-down WHO and 1-down BOOMS). The four moveable letters in the grid spell out M-E-O-W!

5 Early challenge for Barack and Michelle Obama, for short : LSAT

“Nixon” is a 1995 Oliver Stone biopic in which Welsh actor Anthony Hopkins plays US president Richard Nixon. This was Stone’s second film about the American presidency, after “JFK” (1991) and before “W” (2008).

60 Fearsome part of a Jabberwock : CLAW

23 Like the boys in “Lord of the Flies” : MAROONED

32 Amazonas and others : RIOS

45 Surgery to improve how you look? : LASIK

The government of India has been changing the names of cities since the end of British rule in 1947. Bombay was renamed to Mumbai in 1995, and Madras became Chennai a year later, in 1996.