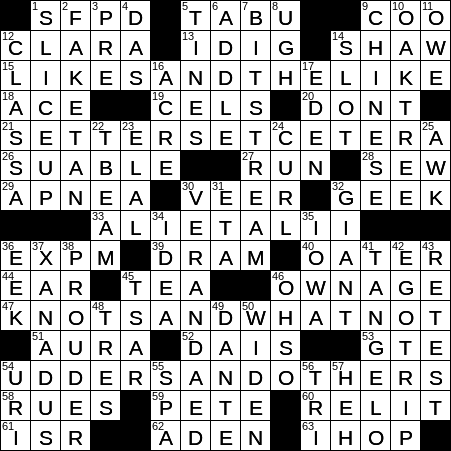 Today’s Theme (according to Bill): Echoes and the Rest

Themed answers each end with a synonym of “and the rest”, and start with a word that echoes that synonym:

1 Employer of Detective Lindsay Boxer in a series of James Patterson novels : SFPD

Author James Patterson is known for his thriller novels, especially those featuring his forensic psychologist Alex Cross. Patterson holds the record for the most hardcover fiction titles to appear in “The New York Times” bestseller list …

Tony Blair was Prime Minister of the United Kingdom for ten years, from 1997 to 2007. Blair moved his Labour Party from the left towards the center, utilizing the moniker “New Labour”. Under his leadership, Labour won a landslide victory in 1997 and was comfortably elected into power again in 2001 and 2005. Blair stepped down in 2007 and Gordon Brown took over as prime minister. Labour was soundly defeated at the polls in the next general election, in 2010.

45 An indispensable ingredient in the elixir of life, per Lao-tzu : TEA

A holistic approach to medicine emphasises not only physical symptoms but also social considerations and the environment.

63 Where a batter eventually goes to the plate? : IHOP

A yellow ribbon is symbolically worn by people awaiting the return of a loved one, usually from military service overseas, but also from a penal institution. The song “Tie a Yellow Ribbon Round the Ole Oak Tree” tells the tale of a convict returning home. His loyal loved one is waiting for him and she ties a whole boatload of yellow ribbons around the old oak tree to greet him.

Shangdu (also “Xanadu”) was located in Inner Mongolia in China, just over 200 miles north of China. Shangdu was the capital of the Yuan dynasty that was established in 1271 by Kublai Khan. The Venetian traveller Marco Polo visited Shangdu in about 1272, and the city was destroyed by the Ming army in 1369. Centuries later in 1797, the English poet Samuel Taylor Coleridge immortalized the city (as “Xanadu”) in his celebrated poem “Kubla Khan”.

In French, one might be “très” (very) glad to finish the crossword.