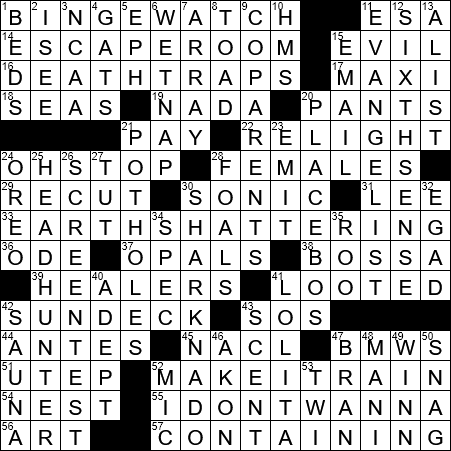 11 Celle-là, across the Pyrenees : ESA

Bossa nova is a style of music from Brazil that evolved from samba. The most famous piece of bossa nova is the song “The Girl from Ipanema”. The term “bossa nova” translates from Potuguese as “new trend”, or more colloquially as “new wave”.

3 Org. that holds many conferences : NCAA

It seems that the Epistle of Paul to the Ephesians (Eph.) is now regarded by scholars as written “in the style of Paul” by someone who was influenced by Paul’s thought.

6 Amenity in many a picnic box : WET NAP

42 Part of a bathhouse : SAUNA

The Winn-Dixie supermarket chain started out as a family concern, growing from a general store in Burley, Idaho in 1914. When the family business was big enough, it took a controlling interest in a chain of stores called Winn-Lovett in 1939. Using the name Winn-Lovett, the company continued to grow and in 1955 bought the Dixie Home chain of stores. At that point the name changed to Winn-Dixie. The original family name? That was Davis …

Twilight is the light experienced when the sun is below the horizon, both in the morning and the evening. The prefix “twi-” seems to come from the sense of “half”, and in “half light”. There appears to be no connection to the word “twice”, despite twilight occurring twice each day.