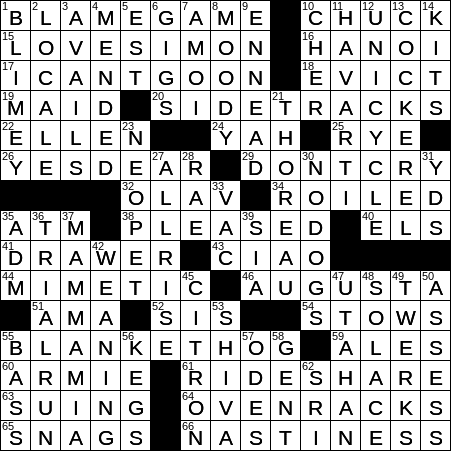 “Love, Simon” is a 2018 teen comedy-drama that is based on a 2015 novel called “Simon vs. the Homo Sapiens Agenda” by Becky Albertalli. The film is noted as the first mainstream Hollywood film to focus on gay teenage romance.

25 Ingredient in an old-fashioned : RYE

There is a quartet of letters L (els) in the word “volleyball”.

52 Term of address for a drag queen : SIS

Neopets.com is a website where one can own a virtual pet. I wouldn’t bother …

39 One-named singer whose name sounds like a goodbye : SIA

Most of our citrus fruits are hybrids of four original fruits: the pomelo, mandarin, papeda and citron.

49 Does some backup dancing? : TWERKS

53 Deity in a Hindu trinity : SHIVA

55 Sound from a subwoofer : BASS

Colombo is the largest city in Sri Lanka. It is also the commercial capital of the island nation, whereas the administrative capital is Kotte (or more formally “Sri Jayawardenepura Kotte). Kotte is in fact a suburb of Colombo.