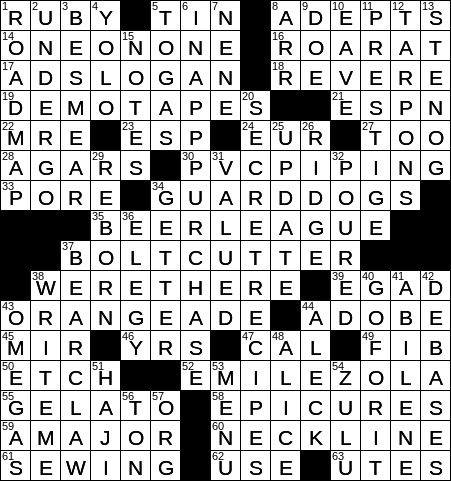 The initialism “ESPN” stands for Entertainment Sports Programming Network. ESPN is a cable network that broadcasts sports programming 24 hours a day, and was launched back in 1979. ESPN has a lot of ardent fans. Several parents have named children Espn (usually pronounced “Espen”) in honor of the network.

The Doberman Pinscher is a breed of dog that was developed around 1890 in Germany. The person responsible for introducing the breed was Karl Friedrich Louis Dobermann, explaining the “Doberman” (sometimes “Dobermann”) name. “Pinschers” are a group of Germanic breeds that probably owe their name to the English word “pinch”, a reference to the tradition of cropping (pinching) the ears.

“Mir” is the Russian word for “peace”.

59 Key of Beethoven’s Seventh : A MAJOR

If I had to name which of Beethoven’s symphonies I listen to most often, at the top of the list comes the 7th followed closely by the 9th, and then the 5th a little further down. But that four-note opening of the 5th; that is superb …

63 Conference foes of the Buffaloes : UTES

4 Rationale for a dumb stunt, in modern slang : YOLO

There are two species of the fish known as the tarpon: the Atlantic tarpon and Indo-Pacific tarpon. Many fish have swim bladders, organs that are related evolutionarily to the lungs, and are used to control buoyancy. What is unique about the tarpon is that it uses its swim bladder not only for buoyancy, but also as an accessory respiratory organ. In fact, unless the tarpon gets access to air at the water’s surface, it will die.

Actress Julianne Moore won her Best Actress Oscar for playing the title role in the 2014 film “Still Alice”, which deals with the subject of Alzheimer’s disease. As well as being a talented actor, Moore is a successful children’s author. Her 2007 book “Freckleface Strawberry” became a New York Times Best Seller, and was inspired by the teasing she received as a child for having freckles.

54 Origin of some lyrics sung in “The Lion King” : ZULU

The Zulu are the largest ethnic group in South Africa, with an estimated population of 10-11 million people today. The Zulu were famous for resisting the colonization by the British in 19th century, resulting in the Anglo-Zulu War. The Zulus had initial success, but the British eventually prevailed (see the excellent film “Zulu”, starring Michael Caine and others, from 1964).

57 Ending of many a web address : ORG