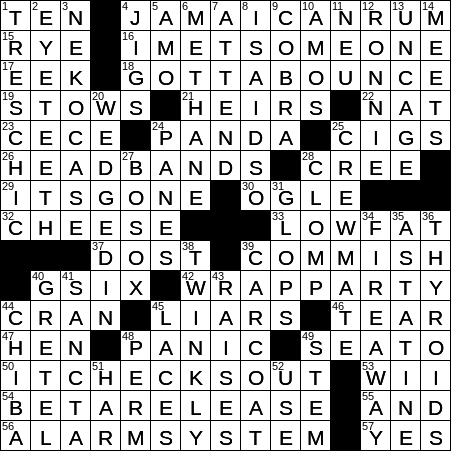 4 The “dark” in a Dark and Stormy, perhaps : JAMAICAN RUM

Onomatopoeia is the naming of something by vocally imitating the sound associated with it. Examples of onomatopoeia are chirp, clash, click and hiccups.

28 Language from which “Saskatchewan” comes : CREE

44 Start of some juice portmanteaus : CRAN-

The Southeast Asia Treaty Organization (SEATO) was set up in 1954 as a defense organization with the mission to block communist influence growing in Southeast Asia. The driving force behind the organization’s creation was President Eisenhower’s Secretary of State, John Dulles. The list of SEATO members included Australia, France, the Philippines, the UK and the US. The organization was never really considered effective and it fell apart in 1977 largely due to a lack of interest by the members.

53 Device sold with a remote : WII

The Boston Red Sox (Bosox) are one of the most successful Major League Baseball teams and so command a large attendance, but only when on the road. The relatively small capacity of Boston’s Fenway Park, the team’s home since 1912, has dictated that every game the Red Sox has played there has been a sell-out since May of 2003. I recently had the pleasure of touring Fenway Park. It’s quite a place …

36 Energy regulators in the body : THYROIDS

A “sanctum” (plural “sancta”) is a private place where one can hide away without fear of intrusion. I love my sanctum …