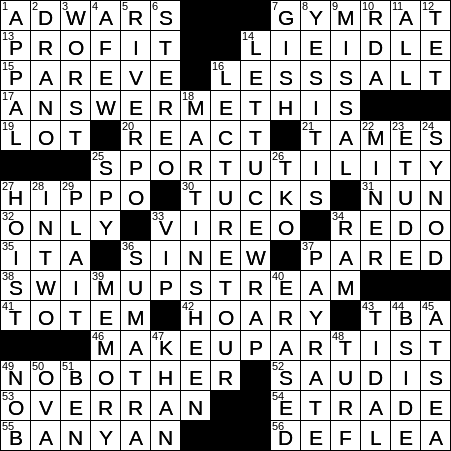 Vireos are pretty little birds native to the New World. Vireos’ wings and bodies are mostly grey, but their heads and throats are often a lovely olive green.

41 Something made for one’s idols? : TOTEM

54 Company with a purple-and-green asterisk in its logo : E*TRADE

The banyan is a fig that germinates in cracks and crevices of a host tree and then sends roots down towards the ground. The roots that head down the the host give rise to a familiar name for the banyan, namely the strangler fig. The banyan tree is the national tree of India.

5 It flows from the Cottian Alps to the Adriatic : RIVER PO

Lillian Gish is most famous for her performances on the silent screen, although she acted in films in a career that lasted from 1912 to 1987, over 75 years. Gish’s most famous role was Elsie in D. W. Griffith’s “Birth of a Nation”, released in 1915.

18 Actor whose roles have included both a fictional and a real-life U.S. president : MARTIN SHEEN

23 Exercise done on a bench : ETUDE

That would be a piano bench.

Krakatoa is an island located between Java and Sumatra in Indonesia. Famously, the volcano on the island erupted in 1883 causing the death of over 36,000 people, who mainly perished in the resulting tsunamis. It is thought that the sound of the explosive eruption was the loudest sound in modern history.