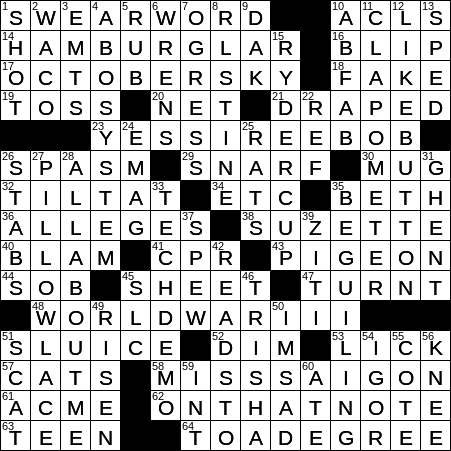 1 You may see stars because of one : SWEAR WORD

It seems that many swear words have four letters, and are usually monosyllabic. This led to the term “four-letter word” being used as a euphemism for a curse word, starting in the early twentieth century.

Something described as indubitable cannot be doubted.

A&W is a brand of root beer that has been around since 1920, when Roy Allen partnered with Frank Wright to create the A&W moniker from their family names.

38 Served in a sauce made with orange juice, sugar and Grand Marnier : SUZETTE

Crêpe Suzette has to be my favorite dessert, although I haven’t dared to eat it in a long time. If you haven’t tried it before, you just have to indulge yourself when you get the chance. It is a pancake served with a sauce of caramelized sugar and butter, as well as orange juice and Grand Marnier. The dish is brought to your table with the alcohol flaming spectacularly.

In the confidence trick known as a “pigeon drop”, the victim (the pigeon) is fooled into putting his or her money into say an envelope along with a sum provided by the trickster. The envelope is switched for an envelope stuffed with perhaps newspaper. The victim usually takes the opportunity to sneak off with the supposed money, but is actually sneaking off with nothing and leaving the trickster a handsome profit.

2 U.S. radio station whose call letters spell the name of its city : WACO

WACO-FM is a local station in Waco, Texas. The station’s byline is “WACO 100, a station so big they named the entire city after it.” WACO is the only major city with call letters that spell out the name of the city. The smaller town of Ware in Massachusetts has an AM station with the call letters WARE.

4 It describes your type : ABO SYSTEM

6 Images on the backs of South Carolina quarters : WRENS

The Carolina wren is the state bird of South Carolina.

8 Author of “One Day at HorrorLand” : RL STINE

“Absolutely Fabulous” (sometimes shortened to “AbFab”) is a cult-classic sitcom produced by the BBC. The two stars of the show are Jennifer Saunders (Edina Monsoon) and Joanna Lumley (Patsy Stone). “Absolutely Fabulous: The Movie” hit the screens in 2016. I haven’t seen it yet, but my wife did and really enjoyed it. She said that there’s a veritable cavalcade of British stars that make an appearance …

15 Competition hosted by the U.S. every four years : RYDER CUP

22 One often accused of blindness : REF

The protagonist in George Orwell’s novel “Nineteen Eighty-Four” is Winston Smith, just an ordinary individual. Winston is tormented by O’Brien, a member of the Inner Party who poses as someone open to counter-revolutionary resistance.

Ghent is a city in the Flemish region of Belgium. The War of 1812 (between Britain and the US) was formally concluded with the signing of the Treaty of Ghent In 1814. The American negotiating team in Ghent included Henry Clay and John Quincy Adams.

An integer is a number that does not include a fraction. The word “integer” is Latin for “whole”.