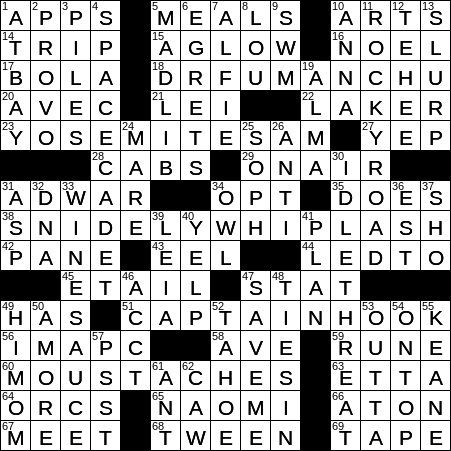 Themed answers are each the names of fictional villains, each of whom sports an evil-looking MOUSTACHE:

Dr. Fu Manchu is a villainous character created by English author Sax Rohmer. He was played on the big screen by some big names over the years, including Warner Oland, Boris Karloff, John Carradine, Christopher Lee, Peter Sellers and Nicolas Cage.

Dudley Do-Right appeared on the Rocky and Bullwinkle Show, a cartoon that appeared on television in a couple of different versions from 1959-1964. Dudley was a bungling Mountie who struggled with his nemesis, the evil Snidely Whiplash, while pursuing the romantic intentions of Nell Fenwick (who always seemed to prefer Dudley’s horse!).

“Electrophorus electricus” is the biological name for the electric eel. Despite its name, the electric “eel” isn’t an eel at all, but rather what is called a knifefish, a fish with an elongated body that is related to the catfish. The electric eel has three pairs of organs along its abdomen, each capable of generating an electric discharge. The shock can go as high as 500 volts with 1 ampere of current (500 watts), and that could perhaps kill a human.

Captain Hook is the bad guy in “Peter Pan”, the famous play by J. M. Barrie. Hook is Peter Pan’s sworn enemy, as Pan cut off Hook’s hand causing it to be replaced by a “hook”. It is implied in the play that Hook attended Eton College, just outside London. Hook’s last words are “Floreat Etona”, which is Eton College’s motto. Barrie openly acknowledged that the Hook character is based on Herman Melville’s Captain Ahab from the novel “Moby Dick”.

56 Part of an old Apple commercial tagline : I’M A PC

59 Letter in a Viking inscription : RUNE

63 James with a jazzy voice : ETTA

69 Ending with ticker or masking : … TAPE

The expression “space cadet” is used to describe someone who is eccentric and disconnected with reality. It may even imply that the person is a user of hallucinogens. The phrase has been around since the sixties, and may be derived from the science fiction TV show “Tom Corbett, Space Cadet” which aired in the fifties.

49 Sign in the bleachers at a football game : HI, MOM!

61 Insect found in “Antarctica” … but not Antarctica : ANT

The letter string “ANT” appears in the word “Antartica”, but there aren’t any ants living naturally in Antarctica.