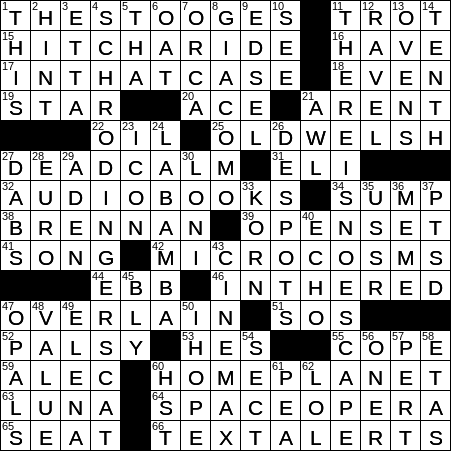 Happy Valentine’s Day, everyone …
… a complete list of answers

1 Rock and Roll Hall of Fame band led by Iggy Pop : THE STOOGES

Love ‘em. Have done for decades …

The term “sump” has been used for a “pit to collect water” since the middle of the 17th century. Prior to that, “sump” meant “marsh, morass”.

William J. Brennan was an Associate Justice of the US Supreme Court for almost 34 years. Brennan was appointed to the Court by President Eisenhower in 1956. President Clinton presented Justice Brennan with the Presidential Medal of Freedom in 1993.

Going for a song.

“He’s So Fine” is a great little song that was released by the Chiffons in 1962. Famously, the owners of the rights to the song sued George Harrison in 1971, claiming that he was guilty of plagiarising “He’s So Fine” in writing his hit “My Sweet Lord”. Harrison was found guilty of “subconscious” plagiarism. In a strange twist, the Chiffons recorded a version of “My Sweet Lord” a year before the case was decided.

“Wagon Train” is a TV Western that originally aired from 1957 until 1965. The show (which I loved as a kid) was inspired by a 1950 John Ford movie called “Wagon Master”. The televison series is about a wagon train making its way from Missouri to California.

While “to avel” can mean “to get tangled up”, the term is usually used to mean “to unravel, disentangle”. Yep, “ravel” and “unravel” mean the same thing!

21 Rebus symbol for “everything” : AWL

26 Kim Jong-un and others : DESPOTS

A despot is a ruler with absolute power, and often one who wields that power oppressively. “Despot” is an old French term from the 14th century that is ultimately derived from the Greek “despotes” meaning “master of a household, absolute ruler”.

Loni Anderson’s best-remembered role was Jennifer Marlowe on the sitcom “WKRP in Cincinnati”. Anderson has been married four times, most famously to actor Burt Reynolds from 1988 to 1993.

The Department of Veterans Affairs (VA) was formed in 1930 to manage pre-existing government benefits for war veterans. Some of those benefits dated back to the Continental Congress. Today, the most visible benefit is probably the network of VA medical centers that provide comprehensive healthcare services to veterans.

45 Nellie who circumnavigated the world : BLY