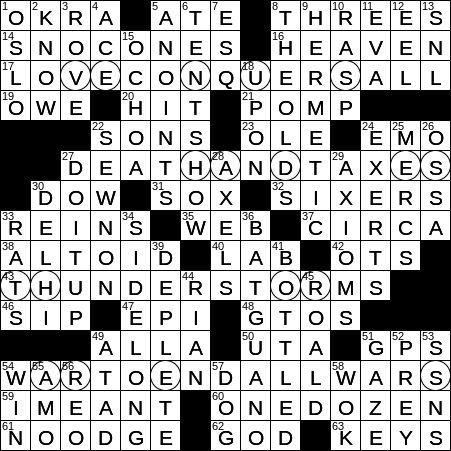 Themed answers each include a set of circled letters that spell out the name of a god. The first letter of each themed answer is the realm controlled by that god:

1 Vegetable that can get slimy when overcooked : OKRA

16 Locale in the Lord’s Prayer : HEAVEN

In a letter to Jean-Baptiste Leroy dated 13 Nov 1789, Benjamin Franklin wrote “Our new Constitution is now established, and has an appearance that promises permanency; but in this world nothing can be said to be certain, except death and taxes.”

32 Team sharing an arena with the Flyers, informally : SIXERS

The Philadelphia Flyers hockey team was founded in 1967. The team’s name was chosen using a “name-the-team” fan contest.

Altoids breath mints have been around since 1780, when they were introduced in Britain. The famous tin in which Altoids are sold is often reused for other purposes. The most famous use is as a container to hold a mini-survival kit.

60 Phrase on an egg carton : ONE DOZEN

1 Where Edvard Munch’s “The Scream” is displayed : OSLO

7 Name ender for a lawyer : ESQ

13 Where an artist works on a sketch, for short? : SNL

15 Lorena who was the #1 female golfer for 158 consecutive weeks : OCHOA

Guano is the droppings of seabirds, bats and seals. It is prized as fertilizer as it doesn’t really smell, and contains high levels of phosphorus and nitrogen. The word “guano” means “seabird droppings” in the Quechua language spoken in the Andes region of South America.

45 Dahl who wrote “James and the Giant Peach” : ROALD

55 Start of a Latin conjugation : AMO