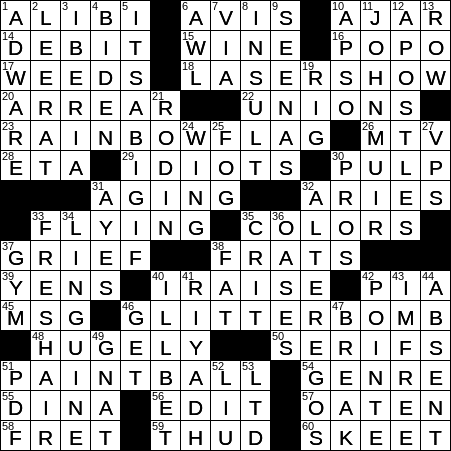 1 Story of why you really couldn’t have done it : ALIBI

Homer was a famous poet of ancient Greece who is believed to be the author of the two classic epic poems “Iliad” and “Odyssey”. However, some scholars believe that Homer did not actually exist, but rather he is the personification of oral tradition that was passed down through the ages.

Pia Zadora is an American actress and singer. Zadora’s most famous role was in the 1982 film “Butterfly” in which she worked with Orson Welles and Stacey Keach. The film was based on the novel “The Butterfly” by James M. Cain and deals with the difficult subject of father-daughter incest.

51 Sport that can leave you with welts : PAINTBALL

“BUtterfield 8” (note the capitalization of both the “B” and the “U”) is a film released in 1960 starring Elizabeth Taylor and Laurence Harvey. The title of the movie, and of the John O’Hara novel on which the film is based, is actually a telephone number. Up to the mid-sixties, telephone exchanges were given names rather than numbers. BUtterfield 8 was an exchange in the wealthy Upper East Side of Manhattan, and calling BU-8 was equivalent to 28-8, the first three digits of a 7-digit phone number.

“Adware” is “advertising-supported software”, an application that includes ads in some form so that the developed can generate revenue. Sometimes deceptive practices can be used to entice a user to install such programs, so adware can sometimes be classed as malware (malicious software).

11 Who said “In every walk with Nature, one receives far more than he seeks” : JOHN MUIR

25 Something a lighthouse beacon cuts through : FOG

The oldest lighthouse still in use is the Tower of Hercules located on the coast of Galicia in northwest Spain. Renovated in 1791, this magnificent lighthouse was built by the Romans in 2nd century CE and has been in constant use since that time. It is believed that the structure’s design is based on the famous Lighthouse of Alexandria, one of the Seven Wonders of Ancient World.

“Linguine alle vongole” is Italian for “linguine with clams”. The dish originated in Naples, but is popular all over Italy, and indeed all over North America.

Basketball is truly a North American sport. It was created in 1891 by Canadian James Naismith at the YMCA in Springfield, Massachusetts. His goal was to create something active and interesting for his students in the gym. The first “hoops” were actually peach baskets, with the bottoms of the baskets intact. When a player got the ball into the “net”, someone had to clamber up and get the ball back out again in order to continue the game!

Riyadh is the capital of Saudi Arabia, and is located near the center of the country. The name “Riyadh” translates from Arabic as “the gardens”.

47 Start of a billiards game : BREAK