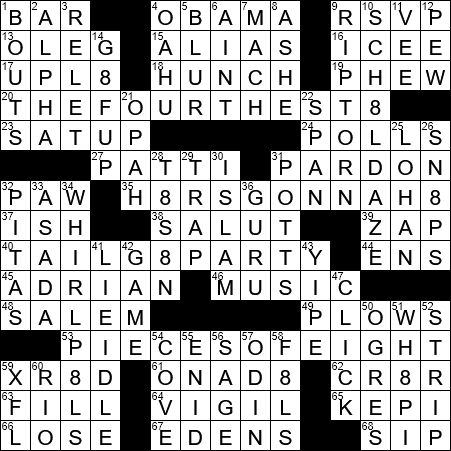 Themed answers in the across-direction include the number 8 (representing “ATE”). Those same squares are read as “OO” in the down-direction:

Patti Smith is a singer-songwriter who was a big player in the seventies punk rock movement in New York City. Smith’s most successful song is “Because the Night”, a song co-written with Bruce Springsteen and recorded by Smith in 1978. Her influence in the punk rock scene earned Smith the nickname “Godmother of Punk”.

In French, “salut” means “hi”, and is less formal than “bonjour”. The term can also be used as a friendly toast.

The ends of the word “nation” are letters N (ens).

46 “Sweet and healing medicine of troubles,” per Horace : MUSIC

48 Town that inspired “The House of the Seven Gables” : SALEM

I had the pleasure of visiting the charming House of Seven Gables a few years ago in Salem, Massachusetts. The core of the house was built in 1668, for one Captain John Turner, and overlooks Salem Harbor. After a couple of generations, the house had to be sold by the Turners and it was purchased by the Ingersoll family. The author Nathaniel Hawthorne was a relative of the Ingersolls and often visited the house growing up. It was this house that gave Hawthorn the title for his famous Gothic novel “The House of the Seven Gables”.

53 Pirate plunder … or a hint to interpreting an appropriate number of squares in this puzzle : PIECES OF EIGHT

62 What a volcano may leave : CRATER

Rip Torn was the actor who played the veteran television producer Artie on “The Larry Sanders Show”. That said, I always associate Torn with the role of Agent Zed in the “Men in Black” movies. Torn was married three times, to actresses Ann Wedgeworth, Geraldine Page and Amy Wright. His first cousin is actress Sissy Spacek. “Rip” is a nickname that runs in the Torn family. The actor was born Elmore Rual Torn, Jr.

12 Support for a religious group? : PEW

Annie Potts is an actress from Nashville, Tennessee. She had roles in successful films such as “Ghostbusters” and “Jumpin’ Jack Flash” and did voice work for “Toy Story” and “Toy Story 2”. Potts was lucky to survive a car crash when she was 21 years old, as she broke nearly every bone in her lower body.

“Young Sheldon” is a spinoff prequel to the hit sitcom “The Big Bang Theory” that follows the life of a 9-year-old Sheldon Cooper. The title character is played by child actor Iain Armitage. Jim Parsons, who plays Sheldon on “The Big Bang Theory”, is the narrator for the spinoff, and is also an executive producer. In another link between the shows, young Sheldon’s Mom is played by actress Zoe Perry. Perry is the real-life daughter of Laurie Metcalf, who plays “old” Sheldon’s mom in the original series.

32 Pockets of the Middle East? : PITAS

Delmonico’s Restaurant in New York City, which dates back to 1827, had a signature cut of short loin that was served as a Delmonico steak. That same cut came to be known in the US as a New York strip steak, due to the association with the city and the restaurant.

57 For whom Wednesday is named : ODIN