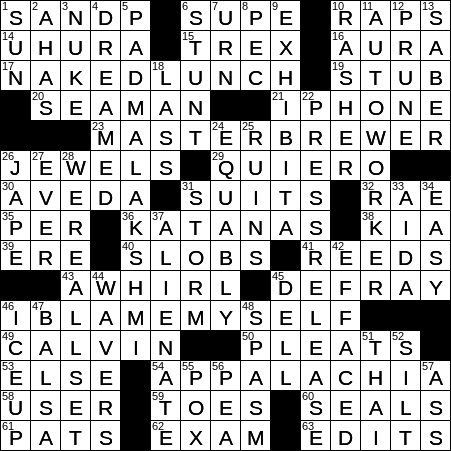 Lt. Nyota Uhura is the communications officer in the original “Star Trek” television series, and is played by Nichelle Nichols. The role is significant in that Uhura was one of the first African American characters to figure front and center in US television. In a 1968 episode, Kirk (played by William Shatner) and Uhura kiss, the first interracial kiss to be broadcast in the US. Apparently the scene was meant to be shot twice, with and without the kiss, so that network executives could later decide which version to air. William Shatner claims that he deliberately ran long on the first take (with the kiss) and fluffed the hurried second take (without the kiss), so that the network would have no choice.

Frederick Pabst was a brewer from the Milwaukee, Wisconsin area who had immigrated to the US from Prussia with his parents. Pabst bought himself into his father-in-law’s small brewery and over the years grew the enterprise into a public company. The most famous beer from Pabst is of course Pabst Blue Ribbon.

A katana is a curved sword worn by the samurai of Japan. A katana is sometimes referred to as a “samurai sword”.

49 Comics title character who says “Getting an inch of snow is like winning 10 cents in the lottery” : CALVIN

54 Pittsburgh is its most populous city : APPALACHIA

Melanin is a natural pigment found in most organisms. In humans, melanin is the pigment in the skin, the production of which accelerates in response to UV radiation causing a “suntan”. Melanin is also what is released as cephalopod ink, a defensive cloud squirted into the water by squids and octopodes.

Padma Lakshmi is a model from India. She is very much into cooking and has published an award-winning cookbook. Lakshmi is now the host of the American TV show “Top Chef”.

What we tend to call “Canadian bacon” in the US, we know as “rashers” on the other side of the Atlantic. One of my uncles worked in the meat trade in Dublin, and his nickname was “Rasher”.

The verb “to equivocate” comes from the Latin “aequus” meaning “equal” and “vocare” meaning “to call”. So, to equivocate is “to call equally”, and is used in the sense of giving equal emphasis to two sides of an argument, to be non-committal, to hedge, to equivocate. So, something described as “unequivocal” is the opposite, is unambiguous and clear.

Muay Thai is a combat sport that originated in Thailand. It is also known as “the art of eight limbs”, a reference to the combined use of the fist, elbows, knees and shins.

A pox is any of the diseases that produces “pocks” on the skin, eruptive pustules. The pox might perhaps be smallpox or chickenpox. But, when cursing someone by saying “a pox on you” the reference is to the “great pox”, namely syphilis.