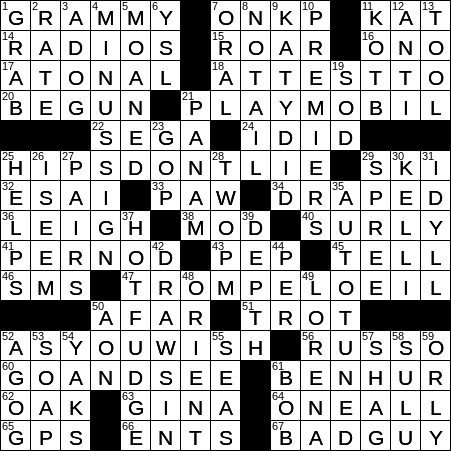 Themed answers end with three-letter sequences that together spell out the name of the singer of “BAD GUY”, i.e. BIL-LIE EIL-ISH:

1 Award notably won in each of the “big four” categories by this puzzle’s honoree : GRAMMY

16 Yoko whose work is sometimes described as 17-Across : ONO
17 Having no musical key : ATONAL

Playmobil is a brand of toy made in Germany. The line of toys comprises 3-inch tall human figures along with a range of accessories.

Shakira’s 2006 song “Hips Don’t Lie” broke a record soon after it was released. It became the most-played pop song in a single week in the history of American radio.

Actor Esai Morales is best known in the world of film for the 1987 movie “La Bamba”, which depicted the life of Ritchie Valens and his half-brother Bob Morales (played by Esai). On the small screen, Morales plays Lt. Tony Rodriguez on “NYPD Blue” and Joseph Adama on “Caprica”.

33 The Iams logo depicts one : PAW

My guess is that the actress Janet Leigh’s most remembered performance is as the woman who gets killed in the shower in the Hitchcock classic “Psycho”. Leigh’s third husband was the actor Tony Curtis, and their daughter is the lovely Jamie Lee Curtis.

The 1999 movie “The Mod Squad” was an adaptation of the seventies television show of the same name. The part of Lincoln “Linc” Hayes was played by Omar Epps, Claire Danes played Julie Barnes and Giovanni Ribisi played Peter Cochran.

The drink usually called just “Pernod” is a French beverage more correctly called “Pernod Anise”. The brand name was created by Henri-Louis Pernod in the late 1700s when he opened an absinthe distillery in Switzerland.

“Dennis the Menace” is a comic strip that first appeared in 1951, and was originally drawn by Hank Ketcham. The strip made the jump over the years from the newspaper to television and the silver screen. Dennis’s full name is Dennis Mitchell, and his parents are Henry and Alice (Johnson) Mitchell. Dennis’s nemesis is his neighbor, Mister George Everett Wilson. Hank Ketcham drew his inspiration for the story from his real life. When he introduced the strip he had a 4-year-old son called Dennis, and a wife named Alice.

9 Relative of a cricket : KATYDID

21 Old airline with a globe in its logo : PAN AM

There’s a lot of speculation about how the dessert called a sundae got its name, but there seems to be agreement that it is an alteration of the word “Sunday”.

49 Ochoa in the World Golf Hall of Fame : LORENA

Disneyland Paris is the most visited attraction in the whole of Europe. Originally called Euro Disney, the resort opened in 1992 and was the second Disney park to open outside of the US, after Tokyo Disney.