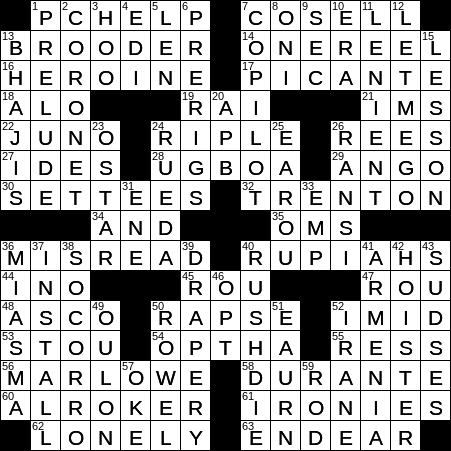 Today’s Theme (according to Bill): Black Tea … Sounds Like

There are four large letters T outlined by black squares in the grid. Those letters T start/finish answers that touch them.
… a complete list of answers

Smokin’ Joe Frazier was world heavyweight boxing champion from 1970 to 1973, eventually losing the title to George Foreman. Two of Frazier’s most memorable fights were against Muhammad Ali. In 1971’s “Fight of the Century”, Frazier emerged victorious, delivering Ali his first ever defeat. In 1975’s “Thrilla in Manila”, Ali came out on top. Frazier and Ali were actually great friends, despite the acrimony on display in front of the cameras. While Ali was barred from boxing for refusing the draft, Frazier lent Ali money. He also appeared in front of Congress on Ali’s behalf and petitioned President Nixon to have Ali’s right to box reinstated.

“Jane Eyre” is the celebrated novel written by Charlotte Brontë, under the pen name Currer Bell. The love story is perhaps represented by the oft-quoted opening lines of the last chapter, “Reader, I married him”. There is a wonderful 4-hour television adaptation made by the BBC that I highly recommend to fans of the novel …

Tim Curry is a marvelous actor from England who is perhaps best known on this side of the Atlantic for playing Dr. Frank-N-Furter in the 1975 movie “The Rocky Horror Picture Show”. Curry also played the title role in the original Broadway play “Amadeus”.

29 Letter in the last third of the NATO alphabet : TANGO

“Settee” is another word for “couch”. The term comes from the Old English “setl”, which was a long bench with a high back and arms.

First settled in 1679 by Quakers, the city of Trenton is the state capital of New Jersey.. The original settlement was named Trent-towne in 1719 in honor of William Trent, who was one of the biggest landowners in the area. The name “Trent-towne” was later shortened to Trenton. The city was the site of George Washington’s first military victory in the Revolutionary War, in 1776. Because of the Battle of Trenton, New Jersey’s capital is sometimes referred to as the “Turning Point of the Revolution”.

The “rupiah” is the currency used in Indonesia. The locals often use the name “perak” for the same unit of currency, which is a word meaning “silver”.

10 Part of the conjugation of the Latin “esse” : ERAT

Salman Rushdie is a famous British novelist, born in India. His most celebrated novel is “The Satanic Verses”, published in 1988, a Booker Prize finalist. However, the book attracted unfavorable attention from many in the Muslim faith who labelled it as blasphemy. Such was the outrage that a fatwā was issued in 1989 by Iran’s Ayatollah Khomeini calling for the faithful to kill Rushdie. He remains under police protection provided by the UK government and has not been harmed, although others associated with the book have been injured and even killed.

41 First country to establish Christianity as its state religion : ARMENIA

Armenia is a landlocked country found east of Turkey, and is a former Soviet Socialist Republic (SSR). Back in the year 301 CE, the ancient Kingdom of Armenia became the first nation in the world to adopt Christianity as its national religion.

49 French port on the Mediterranean : TOULON

As well as being a town on the southern coast of France, Toulon is a military port and home to the French Mediterranean Fleet. In particular, it is the home port of the French Navy’s sole aircraft carrier, the Charles de Gaulle.