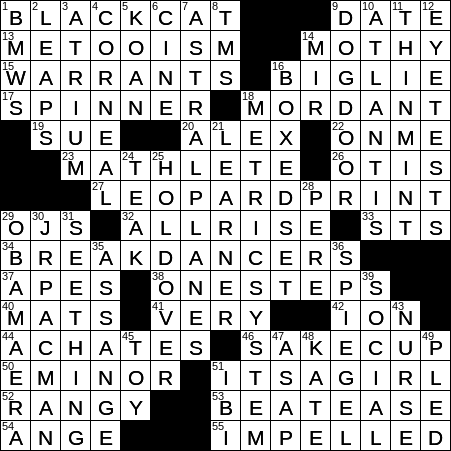 20 Girlfriend on “Orange Is the New Black” : ALEX

The love song “Try a Little Tenderness” was first released in 1932 by the Ray Noble Orchestra, and has since been covered countless times. The most famous version is probably by Otis Redding from 1966. My personal favorite performance is in the Irish movie “The Commitments”. That movie is a must-see for anyone interested in contemporary Irish culture, in my humble opinion …

Simon Peter (often “Peter” or “Saint Peter”) was one of the twelve apostles of Jesus Christ. The Christian tradition holds that Peter founded the Roman Church, and the Roman Catholic tradition names Peter as the first pope.

According to the Bible, Saint Paul was an apostle, although he was not one of the original Twelve Apostles. Paul is said to have written 14 of the 27 books in the Christian New Testament.

According to the Christian New Testament and the Quran, the mother of Jesus was a woman from Nazareth named Mary (“Maryam” in the Islamic account),.

38 Ballroom alternatives to the foxtrot : ONE-STEPS

The Space Shuttle Atlantis had its first launch in 1985. The shuttle takes its name from the RV Atlantis, a two-masted sailboat that operated from the thirties through the sixties with the Woods Hole Oceanographic Institution, the largest independent marine research organization in the country. The “odometer” reading on the Space Shuttle Atlantis after her 32nd flight, was about the same as 505 one-way flights from the Earth to the Moon!

12 They require you to read the fine print : EYE TESTS

The commonly used eye chart (that starts with the letters “E FP TOZ LPED”) is called a Snellen chart. The test is named after its developer Herman Snellen, who introduced it way back in 1862.

35 Author of the 2012 book “Cypherpunks: Freedom and the Future of the Internet” : ASSANGE

Spiegel is a company that sells women’s clothing and accessories, and which has a famous catalog sales business. The company was founded way back in 1865 by Joseph Spiegel as a home furnishings retail outlet in Chicago.

48 Mother of the royals George, Charlotte and Louis : KATE

Kate Middleton is the wife of Prince William of the UK. Middleton is what one might call a commoner, although since her marriage she is known as the Duchess of Cambridge. She was born to parents who had worked together as flight attendants before becoming quite wealthy running their own mail-order business. As is so often the case in Britain, Kate’s ancestry can be traced back far enough to show that she and William do have common ancestors, dating back to the 1500s on her mother’s side and to the 1400s on her father’s side.