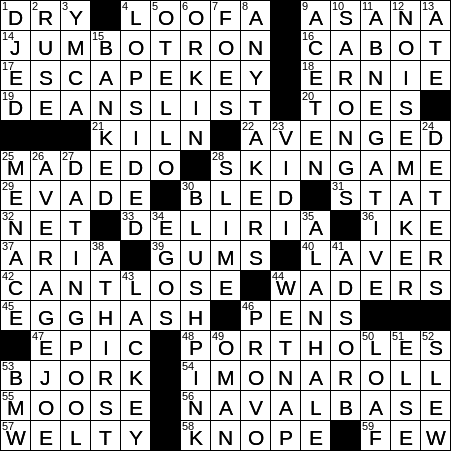 18 Orange half of an iconic duo : ERNIE

Ike Barinholtz is an actor and comedian who appeared on MADtv from 2002 until 2007. More recently, Barinholtz became a writer on the TV show “The Mindy Project”, and was then cast as Nurse Morgan Tookers.

55 Mascot of the Winnipeg Jets : MOOSE

The YMCA (“the Y”) is a worldwide movement that has its roots in London, England. There, in 1844, the Young Men’s Christian Association (YMCA) was founded with the intent of promoting Christian principles through the development of “a healthy spirit, mind and body”. The founder, George Williams, saw the need to create YMCA facilities for young men who were flocking to the cities as the Industrial Revolution flourished. He saw that these men were frequenting taverns and brothels, and wanted to offer a more wholesome alternative.

Orkin is a pest-control company. If you want to learn more about insects, you might want to visit the O. Orkin Zoo, a permanent exhibit at the Smithsonian in Washington, D.C. The exhibit has over 300 live insects, all displayed in their natural habitats.

“Sarong” is a Malay word for “sheath”, and the term originally described a garment worn by Malay men and women around their waists. The Malay sarong is actually a tube of fabric, about a yard wide and two-and-a-half yards long. Many variations of the sarong are worn all over South Asia and the Pacific Islands. I had occasion to wear one in Hawaii many years ago, and found it very … freeing!

11 Type least likely to turn up in a hospital : AB-NEGATIVE

35 Player of the Skipper on “Gilligan’s Island” : ALAN HALE

41 Gather on the surface, chemically : ADSORB

53 Company that makes the Mini : BMW