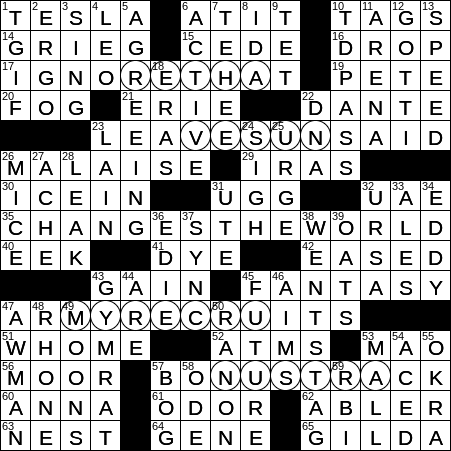 Themed answers each include a sequence of letters that are circled in the grid. Each of the sequences is the name of a planet (WORLD), with the order of the letters CHANGED:

Edvard Grieg is Norway’s best known composer, some who was active in the Romantic Era. Grieg’s most famous works are the gorgeous “Piano Concerto in A minor”, and his incidental music for the play “Peer Gynt” by Henrik Ibsen.

A malaise is a general but undefined feeling of discomfort or illness. The term “malaise” ultimately comes from Old French with the prefix “mal-” meaning “bad” and “aise” meaning “ease”.

In the 1930s, the rebel People’s Liberation Army (PLA) of China was locked in battle with the army of the Chinese Nationalist Party led by Chiang Kai-shek. In the jaws of defeat, the PLA (or “Red Army”, as it was known) managed to make a series of withdrawals from the southern part of the country, evading capture by retreating to the north. This campaign of retreat involved the Red Army traversing about 8,000 miles of difficult terrain in a move that took over a year. The Communist troops of the Red Army were led by Mao Zedong and Zhou Enlai. The retreat came to be termed “the Long March”, and its relative success established the reputations of Mao Zedong and Zhou Enlai within the Communist Party, and ultimately led to their takeover of power after the subsequent Chinese Civil War.

60 Actress Paquin who won an Academy Award at age 11 : ANNA

The odor-eliminating product we know today as Febreze was developed in England in the early nineties. It is now produced by Procter & Gamble.

8 State between Wash. and Mont. : IDA

The US state of Idaho has a panhandle that extends northwards between Washington and Montana, right up to the border with Canada. Across that border is the Canadian province of British Columbia. Most of Idaho is in the Mountain Time Zone, but Northern Idaho (the Panhandle) is in the Pacific Time Zone.

22 Material in a cell’s nucleus : DNA

“Gym rat” is a slang term describing someone who spends all of his or her leisure time playing sports or working out at the gym. Never been called a gym rat …

So far, Jupiter is known to have 67 moons, more than any other planet in the Solar System. The four largest moons (Io, Europa, Ganymede and Callisto) were discovered by Galileo in 1610, making them the first objects found that did not orbit either the Earth or the Sun.