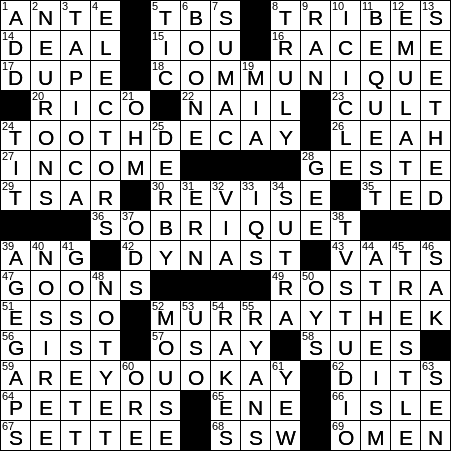 Today’s Theme (according to Bill): Ending it with Kay

Themed answers each end with a “kay” sound:

“March Madness” is the name given to the NCAA Men’s Division 1 Basketball Championship (among others), that is held in spring each year.

The Choctaw are a Native American people from the southeast of the United States. The Choctaw were the first Native Americans to be forced from their land under the Indian Removal Act of 1830. They were relocated to lands west of the Mississippi River in Indian Territory.

16 Flower cluster whose name can also be read as a challenge : RACEME and RACE ME

A raceme is a long stalk with flowers placed at equal distances from each along its length. It just keeps growing, and new flowers appear at the tip.

26 Remini who co-starred on “The King of Queens” : LEAH

Leah Remini is an actress and comedian who is best known for playing Carrie Heffernan on the sitcom “King of Queens”. More recently, in 2013, Remini competed on “Dancing with the Stars”. After that, Remini appeared as a guest co-host on the show several times.

The broadcast journalist Ted Koppel is most associated with his long run as anchor for the “Nightline” program on ABC. Koppel was actually born in England, to a Jewish family that had fled from Germany. He emigrated with his family to the US when he was 13 years old. Koppel is great friends with former Secretary of State Henry Kissinger who was a frequent guest on his television show.

A sobriquet is an affectionate nickname. The term “sobriquet” is French, in which language it has the same meaning.

Murray the K was the professional name used by disk jockey Murray Kaufman who was very successful in the fifties, sixties and seventies. Kaufman got his big break hosting an all-night radio show that he called “The Swingin’ Soiree”.

“O say can you see by the dawn’s early light” is the opening line of “The Star-Spangled Banner” by Francis Scott Key. The song was adopted as the US national anthem in 1931, although it had been used officially by the US Navy since 1889, played when raising the flag.

“Settee” is another word for “couch”. The term come from the Old English “setl”, which was a long bench with a high back and arms.

Aaron Boone is a former MLB infielder who retired as a player in 2009, a few months after undergoing open-heart surgery to have a heart valve replaced. He then pursued a successful career in sports broadcasting, primarily with ESPN. In late 2017, Boone was hired as manager of the New York Yankees.

Sumacs are a group of flowering shrubs and small trees that includes poison oak, poison ivy and poison sumac (nasty stuff!). The leaves of some species of sumac contain tannins that are used for tanning leather. Morocco leather is an example of the use of sumac tannins.

24 Relative of a chickadee : TIT

37 Indulges too much, briefly : ODS

A trestle is a frame that is used as a support, particularly a support forming part of a bridge.

“Ryan’s Hope” is a soap opera that ran on ABC from 1975 to 1989. The show’s storyline centers on an Irish-American family in New York City. Never saw it …

61 Plant in an English hedge : YEW

The family of trees and shrubs known as yews propagate by producing a seed surrounded by soft, sweet and brightly colored aril. Birds eat the fruit and then disperse the seed in their droppings. The birds leave the seed undamaged, and so are unharmed by the potent poisons taxine and taxol that are found within the seed. The seeds are highly toxic to humans.