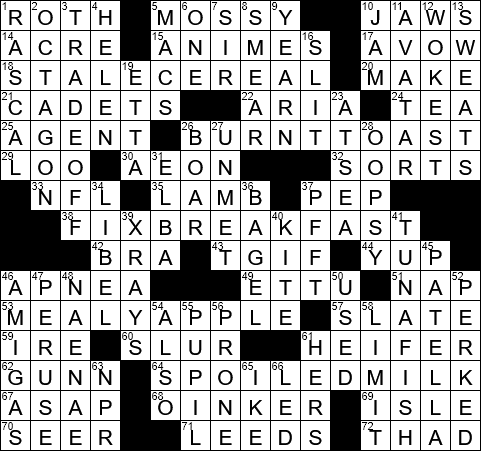 Constructed by: Alison Ohringer and Erik Agard
Edited by: Will Shortz

Themed answers are BREAKFAST items that need to be FIXED:

18 Menu item #1: A bowlful of Cap’n Crunch that’s been on top of the fridge for four years : STALE CEREAL

20 Rhyming opposite of break : MAKE

Jack Bauer is the main character in the television show “24”. Bauer is played by the actor Kiefer Sutherland.

“Aeon Flux” is a sci-fi film from 2005 starring Charlize Theron in the title role. The movie was inspired by an animated TV series of the same name that aired on MTV in the nineties.

“Mary Had a Little Lamb” is a nursery rhyme that originated in the US, first published in Boston in 1830. The rhyme was written by Sarah Josepha Hale, and was based on a real-life Mary who had a pet lamb that followed her around. “Mary Had a Little Lamb” has the distinction of being the first words recorded by Thomas Edison on his phonograph invention in 1877.

In Robert Louis Stevenson’s “Treasure Island”, Ben Gunn is a character who had been marooned on the island by his shipmates. Gunn had lived there alone for three long years when Jim Hawkins comes across him. Author R. F. Delderfield wrote a “prequel” to “Treasure Island” called “The Adventures of Ben Gunn” telling the story of Gunn, a parson’s son who became a pirate.

In the US, a stop sign is red and octagonal.

4 ___ Keller, first deaf and blind person to earn a Bachelor of Arts : HELEN

7 Word before and after yes, in the military : SIR

11 Image next to a user name : AVATAR

55 It gets bigger in the dark : PUPIL