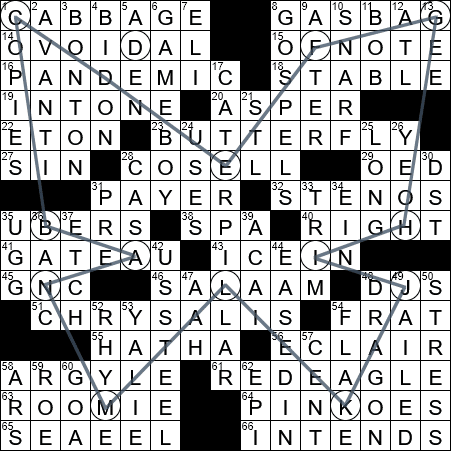 Themed answers are stages in the metamorphosis of a BUTTERFLY. And, by connecting the circled letters in the right order, we create an outline of a BUTTERFLY in the grid:

“To bloviate” is such a descriptive verb, one meaning “to discourse pompously”. “Bloviate” is mock-Latin and derived from “blow”.

28 Sportscaster in the documentary “Telling It Like It Is” : COSELL

35 Modern line at an airport : UBERS

46 Peace in the Middle East : SALAAM

The word “salaam” is an Anglicized spelling of the Arabic word for “peace”. The term can describe an act of deference, and in particular a very low bow.

“Unagi” is the Japanese name for freshwater eel, and “anago” is the name for saltwater eel.

5 Port north of the Horn of Africa : ADEN

The Game Boy is a hugely successful handheld video game player that was released in 1989 by Nintendo. I remember that my my kids were so eager to get hold of the devices when they first came out that I bought a couple of them in a Japanese railroad station, while over there on a business trip.

8 John and Mark, for two : GOSPELS

Michelle Yeoh is an actress from Malaysia who appeared in several Hong Kong action films in which she did her own stunts and martial arts scenes. Her most famous action performance was in the 2000 movie “Crouching Tiger, Hidden Dragon”, although I best know her for playing opposite Pierce Brosnan in the Bond film “Tomorrow Never Dies”.

That would be TSA PreCheck.

“En banc” is a French term, translating as “on a bench”. It refers to the cases in which all the judges of a court hear a case, as opposed to a case heard just by a panel, a subset of the full complement. The phrase is sometimes written as “in banc” in the US.

US Steel was founded in 1901 with a merger of Carnegie Steel, Federal Steel and National Steel. The resulting company immediately became the world’s first billion-dollar corporation. US Steel reorganized in 1986 and changed its name to USX Corporation, but reverted to the US Steel name in 2001. I think I’m right in saying that the USX name was chosen because US Steel is traded under the symbol “X” on the New York Stock Exchange …

The Yale Bulldogs are the athletic teams of Yale University. The Yale school mascot is “Handsome Dan”, the Yale bulldog. The Bulldogs’ logo features a bulldog in front of a letter Y.

The euro is divided in 100 cents, sometimes referred to as “euro cents”. Some countries within the European Union (Ireland, for example) have taken steps to withdraw the 1-cent and 2-cent coins from circulation by allowing cash transactions to be rounded to the nearest five cents. I found it a little odd when buying something in Ireland recently that was priced at 99 cents, and getting no change after handing over a euro coin …

There are a couple of letters R (ars) in the word “married”.